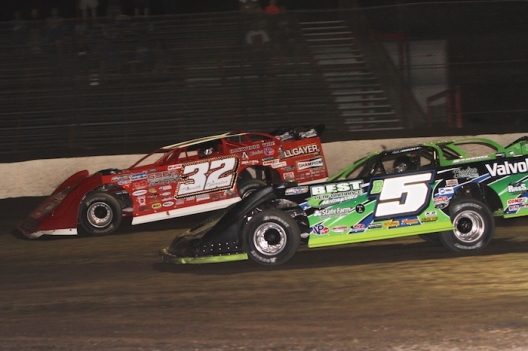 HAUBSTADT, Ind. — Bobby Pierce of Oakwood, Ill., couldn’t quite beat the rain. But he was able to beat — barely — Brandon Sheppard of New Berlin, Ill.

In a UMP DIRTcar Summernationals 40-lapper shortened two laps by a rainstorm at Tri-State Speedway, the series points leader repelled Sheppard’s repeated slide jobs at the quarter-mile oval to notch his fifth victory in nine 2016 starts.

Rain that started with four laps remaining intensified with Pierce and Sheppard both slapping the wall while trying to complete lap 39. With rain pouring at the facility, officials waited 15 minutes before officially calling the race at 38 laps complete, confirming Pierce’s victory.

“Oh, man, that was probably one of the craziest races I’ve been in,” Pierce said. “Me and Sheppy were throwing some awesome sliders, and between lapped traffic and everything, it was just crazy. I mean, they should’ve called the race a little bit earlier, but it is what it is. I’m just glad we got that many laps in. We never took the checkered flag, but I guess the race was over.”

Although Sheppard went ahead of Pierce three times between laps 22-28, Pierce officially led every lap in lengthening his points lead with his 12th career series victory.

Ryan Unzicker of El Paso, Ill., who started outside the front row and led the first 12 laps, finished third with Timothy Culp of Prattsville, Ark., and Michael Kloos of Trenton, Ill., rounding out the top five.

The Tommy Helfrich-promoted track that has featured an array of exciting finishes in Summernationals competition came through again with a dazzling battle between the young Illinois drivers and series champions.

Unzicker got the jump on Pierce at the outset, and following the race’s lone caution for Tom Collini’s turn-four spin on the third lap, Pierce turned up the heat on Unzicker, who began struggling to get through turn four. When Unicker bobbled a second time on lap 13, Pierce slid past and took command with Sheppard dropping Unzicker to third two laps later.

With Pierce out front, Sheppard’s race nearly came to an end when he rear-ended Caleb Ashby just before the flagstand on lap 16, but Sheppard recovered and was challenging Pierce by halfway.

On lap 22, Sheppard dove under Pierce in turn four, but Pierce crossed over and stayed out front. Sheppard slid by against in turn two on lap 33, but Pierce again crossed over down the backstretch to maintain command.

Five laps later, Sheppard summoned another charge when Pierce tried to get under Feger in turns one and two, losing momentum. Sheppard tried another turn-two slide job and briefly went ahead, but Pierce again blew back by him down the backstretch to hang on.

Sheppard never got ahead again, but Pierce had plenty of tense moments and — as fans stood up and headed for the exits when rain began on lap 36 — faced the prospect of a slickening racing surface.

On lap 39, the leading Pierce slid into the turn-three wall while Sheppard tried an outside pass exiting turn four, but his right-rear corner caught the turn-four wall as the frontrunners came to a dripping wet caution flag.

While officials considered whether to call the race, scorers reset the field at lap 38 because every driver hadn’t completed the 39th lap. Within 15 minutes, Pierce was declared the winner and celebrated in the pits long after most fans had flipped on their windshield wipers while heading home.

Pierce was glad to survive a battle with his Illinois buddy.

“It’s just one of those racetracks where the top is the place to be. You gotta beat the quarterpanel off of it — that’s why we came here with the quarterpanel all cut off and stuff,” Pierce said. “I’m wore out to be honest, after that race. I felt like I was driving a non-handling midget or sprint car out there or something.

“I know Shepp was bouncing off the wall and everything trying to catch me, and I was doing the same thing trying to stay ahead of him, so it was just an awesome race.”

The series takes a break Monday before returning to action Tuesday at Clarksville (Tenn.) Speedway for a $5,000-to-win event.

Series points leader Bobby Pierce drew the pole for the feature with fellow heat winners Ryan Unzicker and Brandon Sheppard starting second and third. ... With weather threatening from the north, officials canned the consolation race and transferred all Late Model drivers to the feature. ... The modified C-main hit the track after the Late Model heats and the three transferring cars will remain on the track to run the mod B-main.

Bobby Pierce laid a pair of slide jobs on early leader Mike Marlar and raced to victory in the second 10-lapper. Marlar, who started outside the front row alongside Pierce, settled for second with Shannon Babb and Jason Feger hot on his heels. Tanner English was a distant fifth for the final transfer spot in the caution-free heat that saw lightning in the distant sky behind turn two. Jarryd Holshouser pulled out after six laps.

Polesitter Brandon Sheppard fought off an early challenge from third-starting Timothy Culp and raced to a 10-lap victory. Culp comfortably held second all the way while Rodney Melvin kept Kent Robinson in check finishing third. Dustin Nobbe got the final transfer spot without a challenge A first-lap caution flew when Caleb Ashby, Brent McKinnon and Richard Frost were part of a frontstretch scuffle; McKinnon's damaged nosepiece caused him problems and he slowed on the seventh lap and was pushed off the track after drawing a second yellow.

The ninth round of the UMP DIRTcar Summernationals at Tri-State Speedway wraps up the second week of action on the month-long tour with Bobby Pierce of Oakwood, Ill., still firmly in control of the points chase.

Sunday’s action for 23 cars — tied for the lower car count on the tour with Wilmot a week earlier — includes three heat races, potentially a consolation race and a 40-lap main event. More than 40 modifieds are also in action.