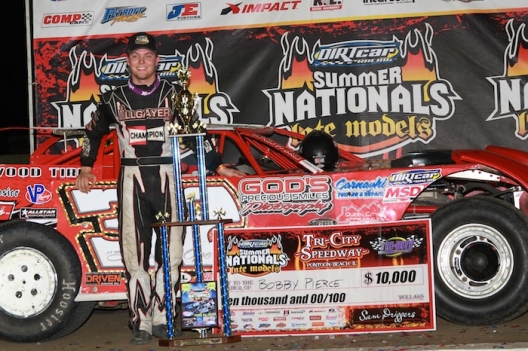 GRANITE CITY, Ill. — Although he’s still a fresh-faced 19-year-old, Bobby Pierce has been waiting for a chance to duel with Billy Moyer for what seems like a very long time.

After all, Pierce has long watched the Batesville, Ark., Hall of Famer rack up many of his 800 victories, and he’s also studied grainy videos of his father Bob’s frequent duels with Moyer at Illinois tracks and beyond during the 1980s and ‘90s.

“You know, just growing up and watching Billy like that, I’ve always kind of wanted this race. You know, me and him — kind of just like a duel match between me and him,” said Pierce, the reigning Summernationals champion and current points leader. “When we drew the front row together, I was like, ‘All right, this could be my chance to race Billy, just me and him,’ and hopefully try to beat him.”

Pierce made the most of that chance, battling side-by-side with Moyer in the early laps, then snookering him after a lap-10 restart to steal the preferred low groove and lead the rest of the 40-lap feature for $10,000 and his series-leading fourth victory of 2016.

Pierce built a straightaway lead and was cruising midway through the race before Moyer drew within a few lengths amid traffic in the final laps, but a lap-37 caution spoiled Moyer’s hope for a late rally, giving Pierce clear racetrack the rest of the way. It gave Piece the win over Moyer — a man nearly 40 years older — that he’s been looking for.

“This was a Billy Moyer racetrack,” Pierce said, “and I kind of like watched him through the years, and take everything that I see him doing, and try to convert it into my own (style) and go up against him like that, that’s really cool.”

Moyer, the all-time winningest Summernationals racer, settled for second while seventh-starting Ryan Unzicker of El  Paso, Ill., was third for his best series run of the season. Chris Simpson of Oxford, Iowa, a former series winner at Tri-City, was fourth with Brandon Sheppard of New Berlin, Ill., rounding out the top five.

Pierce had a lot of fun racing with Moyer, who edged ahead from his pole position at the outset with Pierce trying to figure out which groove might work to overtake him.

“The first five laps, me and him raced side-by-side, and it was honestly some of the most run racing I’ve had,” Pierce said.

But when a lap-10 caution for debris in turn four reset the field, Moyer tried to figure out whether he should stick with the inside groove or try the high side. His crewman was urging him to move higher, and Moyer also noted that Jason Feger — called the Highside Hustler for a reason — was up to third.

“I could see (the high groove) going around there on that yellow, just marbles up there, dusty, you know? My guy is here is telling me the top … (and then) I saw Jason (Feger) on the board there in third, I think, and I was thinking, ‘Well, there’s something up there.’ That’s kind of what I was judging by more so than anything, not so much just to block him, but just to be faster up there.”

So on the restart, if somewhat reluctantly, Moyer tried the high side, and Pierce was ready to pounce.

“The track wasn’t the best, but even though it was like a rubbered-up track, it was still two lanes of racing at the beginning there,” Pierce said. “It was a lot of fun. I moved up, and when I moved up I think someone signaled Billy to move up, and right when he did it I was just waiting for him, and I dropped down and got him.”

Moyer knew he’d made a mistake, and with most drivers sliding down into the low groove the final 25 laps, he realized Pierce would’ve had a hard time getting by on the outside.

“I should’ve just went with my gut and stayed where I planned on running, which was the middle to the bottom. I just pulled up there and let him go by more or less,” Moyer said, trailing off with a somewhat pained laugh. “And then I didn’t come back down. …

“You know, a lot of times you make a mistake or whatever, and it don’t work, somebody passes you, you get back by ‘em if you’ve got a racetrack to do that with. Tonight we didn’t.”

Besides the lap-10 caution, the lap-37 yellow appeared when fifth-running Tim Manville and the lapped car of Jeff Herzog tangled in turn four, costing Manville a likely top-five run.

The tour heads to Fairbury (Ill.) American Legion Speedway on Saturday for a third consecutive $10,000 event, the eighth round of the tour originally scheduled for 29 races.

Dennis Erb Jr. had engine problems after winning the B-main and his car isn't able to go in the main event; he'll pilot Don Hammer's No. 45. ... Billy Moyer is going for his track-leading sixth career Summernationals victory at Tri-City. … He’ll start on the front row with Bobby Pierce, the series points leader. … Also starting up front is Tim Manville, who had a tight duel with Pierce in a regular-season event earlier this season, barely coming out on top of Pierce. … Because 15 Tri-City regulars supported the Late Model special, buoying the 46-car field, co-promoter Tammy Gundaker added three additional local provisionals, growing the field to 25 cars (up from 22) and giving spots to Jeff Herzog, Rusty Griffaw and Mike Hammerle. … Tri-City’s event is part of Heartland Tour which pays bonus money after Sunday’s event at Tri-State Speedway in Haubstadt, Ind. Each week of this year's schedule pays $2,000-to-win, $1,000-to-second and on down the line to the top 10 drivers who attend each of the week's events.

Polesitter Dennis Erb Jr. led all the way for a 12-lap victory. Ninth-starting Mike Marlar took the second spot from Austin Rettig on the ninth lap to get the other transfer spot, leaving Rettig to finish third ahead of Jim Moon and Billy Laycock. Taylor Scheffler went for a lap-two spin to draw the race's lone yellow.

In a photo finish, Chris Simpson nipped Brandon Sheppard by .011 seconds with a late rally in the 10-lapper. Sheppard cruised most of the way but Simpson, who took second from polesitter Tanner English before halfway, never gave up in tracking Sheppard. He pulled alongside in turn three on the final lap and when Sheppard jumped in the gas to zip back ahead, Simpson's low-groove charge paid off as he nipped Sheppard by the tip of his nosepiece. English ended up third just ahead of Kolby Vandebergh, who charged from his ninth starting spot to get the fourth and final transfer spot. A scrape with the wall cost Rodney Melvin a few spots and left him with some dangling sheetmetal. A red flag flew just after the green when Cody Mahoney hit the frontstretch wall on the start. Mahoney's car was towed off the track with heavy front-end damage.

Polesitter Billy Moyer slid high on the fourth lap to steal the groove from high-running Ryan Unzicker and pulled away for an easy victory in the caution-free prelim. Unzicker faded but held on to second with seventh-starting Ashley Newman moving up to grab third. Riley Hickman lost two spots but got the final transfer spot.

Outside front-row starter Tim Manville fought off early challenges from Shannon Babb and Jimmy Mars and captured the second heat. The low-running Mars kept in touch with the high-running Manville but settled for second while Matt Furman and seventh-starting Casey Montague got the other two transfer spots. Babb slowed showing smoke exiting turn two on the fifth lap. A lap-five caution flew when Jim Moon and Cody Conner tangled in turn four battling for fourth, leaving Connor's car spun with spoiler damage. Both had to go to the tail.

Fast qualiifer and polesitter Bobby Pierce built a straightaway lead by halfway and cruised to a 10-lap victory. Fifth-starting Jason Feger got rolling on the high side at halfway and grabbed the second spot on the seventh lap while Jim Schereck and front-row-starting Gardner got the other transfer spots. Dennis Erb Jr. threatened from the sixth starting spot but lost momentum near halfway.

Mike Marlar, the Winfield, Tenn., driver who enters Tri-City second in series points, hit wall during time trials and suffered significant right-front damage. … New Zealand invader Chris Cowling suffered the same fate and crew member Jacob Hawkins was hard at work to change upper and lower control arms before heat action. … Missouri driver Jeremy Payne’s Summernationals ended almost as soon as it began as transmission woes struck when he tried to time trial; he loaded up before heat races. … Rusty Griffaw of Festus, Mo., got his first victory in his own Late Model last weekend at Federated Auto Parts Raceway at I-55, but he’s driving Jim Clark’s car at Tri-City because it’s got a better motor than the 10-year-old peice in his car. “It’s got a lot more smoke than mine,” Griffaw said. “If you can’t get qualified in this deal, you’re done.” Griffaw will have plenty of work to do after a subpar time-trialing effort left him in the fifth row of a heat race. … Series announcer Rick Eshelman is back in the booth Friday after a disagreement with Spoon River announcer B.J. Stone left him without a chance to be on the mic Thursday night at the Banner, Ill. oval. “First time I’ve ever been kicked out of a tower for any reason,” Eshelman said. The Spoon River tower is renowned for being “a little territorial,” series director Sam Driggers told Eshelman.

UMP DIRTcar Summernationals points leader Bobby Pierce of Oakwood, Ill., was quickest of 46 entries Friday night at Tri-City Speedway, tripping the clock with a 15.767-second lap at the 3/8-mile oval.

The UMP DIRTcar Summernationals makes the first of four stops at St. Louis, Mo.-area tracks Friday with Tri-City Speedway’s 3/8-mile oval hosting a $10,000-to-win event. The track is set to host the series for the 17th time after 2015’s event rained out.

Billy Moyer of Batesville, Ark., the all-time winningest series driver, is also the winningest at Tri-City with five victories. Other drivers with multiple victories are Jason Feger of Bloomington, Ill., and Shannon Babb of Moweaqua, Ill., with two victories apiece. Moyer has won two out of the last three visits to the oval promoted by Kevin and Tammy Gundaker, whose son Gordy is following the series for the first time.

The field is expected to be split into two groups for qualifying. Drivers in the first group will be aligned in heats 1-2 and those in the second group will race in heats 3-4. Hot laps are scheduled for 7 p.m.