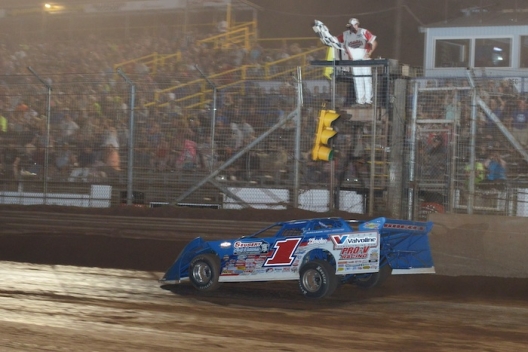 Outside polesitter and Lernerville regular Russ King of Bristolville, Ohio charged to the lead at the drop of the green flag, falling to the fifth-starting Overton on lap six. After a close battle with Overton and King, Richards shot to the front of the field on lap 13, using the bottom of the racetrack to take the point.

But the race was far from over. Dodging a slowing Austin Smith of Cedartown, Ga., Richards opened the door for Overton, who charged back to the lead late in the race. After a caution slowed the field on lap 21, Richards retook the lead on the ensuing restart and the remaining circuits for his eighth World of Outlaws victory of the season.

“It definitely was not easy,” Richards said after the race. “The track was tricky. There were traction spots and and slick places and spots, and that’s just Lernerville for you. It was a lot of fun racing with those guys. We were running with Russ (King) there for a while, and Overton, we got a run back on him.

"I think it was Austin Smith … I got a run on the outside and I was going to try to go around him on the outside and he decided to stop and go in the pits and I had to slam on the breaks and got into the back of him. Luckily it didn’t hurt either one of our cars. Brandon (Overton) got back by us. It was a lot of fun out there."

“Our car was really good there,” Davenport said. “We made a lot of changes right before the feature. We hot-lapped and qualified decent and then our heat race, we were just off a little bit, so we changed some stuff around. The first 10 or 15 laps there was just so hectic. There was so much grit and rocks and stuff blowing across the racetrack. It was really hard to find a line to run.

“On one of those cautions, I felt there was some grip around the top. There was a couple of other people running around the top and I finally got by them. It was just so hard to see. It was such a fine line up there. I didn’t want to do what Austin (Hubbard) did. We was a little harder on tires, so the longer we went, the better we got.”

While he came up just shy of his first career World of Outlaws victory, Overton was still pleased with his podium finish in the Firecracker preliminary.

“To run second to those two guys, they’re pretty good,” Overton said. "We had a pretty good car. We just found out we had a fender brace come off and it kept getting in the right-front tire, so I was having such a time getting through one and two. But all in all, it was a good car and we’ve got something to build on. Maybe we’ll be alright tomorrow."

Notes: A yellow flag flew on the opening lap for a multi-car pileup in turns three and four; Mike Benedum suffered a flat tire. The race was brought to a complete restart. … Steve Casebolt drew a caution on the second lap when he slipped off the backstretch berm. … A yellow flag waved on lap 18 when Morgan Bagley slowed in turns one and two. … Benedum spun in turn two to draw a caution on lap 21. … A yellow flag flew on lap 23 when Scott Bloomquist slid over the banking in turn two. … Austin Hubbard rolled his No. 11 machine — a brand-new Rocket XR1 he debuted at Lernerville — during one of the night’s consolations. He was able to climb from the car, but did sustain an ankle injury, suffering a deep cut.

With Thursday’s preliminary program rained out and rescheduled for Saturday afternoon, Friday’s World of Outlaws Craftsman Late Model Series event will kick off the 10th annual Firecracker 100 weekend at Lernerville Speedway in Sarver, Pa. The 30-lap event will pay $6,000 to the winner.

Friday’s event will include time trials, heat races, consolations and the 30-lap feature. Saturday’s action will include two sessions, with Thursday’s makeup program slated for noon. The evening show will follow afternoon activities including the driver autograph session and cornhole tournament.