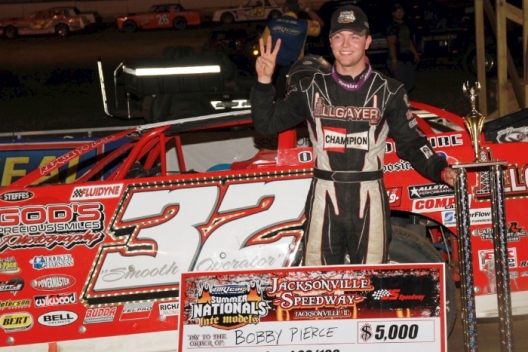 JACKSONVILLE, Ill. (June 21) — The Smooth Operator was the Dominator on Tuesday night at Jacksonville Speedway.

In one of the most convincing performances of his young career, Bobby Pierce of Oakwood, Ill., stormed forward from the sixth starting spot to take the lead from Mike Marlar of Winfield, Tenn., on lap 14 and absolutely blew away his competition over the remaining distance to easily capture the 40-lap UMP DIRTcar Summernationals-sanctioned ILMO Propane Wildman Kelly Classic.

Pierce, 19, was simply untouchable once in command. The defending Summernationals champion roared away from Marlar to build more than a half-lap advantage by lap 28 and was threatening to tear through a five-car battle for third place and lap nearly the entire field when a caution flag on lap 37 brought him back to the pack.

The final restart was no sweat for Pierce, who drove off to defeat Marlar by 2.063 seconds. Michael Kloos of Trenton, Ill., finished third, followed by 2000 Hell Tour champion Kevin Weaver of Gibson City, Ill., and four-time series titlist Shannon Babb of Moweaqua, Ill.

It was Pierce’s second straight win and third in the first five events of the 2016 Summernationals, continuing the sensational teenager on a course toward the type of prolific Hell Tour victory total associated with such series legends as Babb, Billy Moyer of Batesville, Ark., and Don O’Neal of Martinsville, Ind. He’s already on the verge of matching his single-season career Summernationals high of four wins, which he achieved in 2013 as a 16-year-old.

Pierce’s domination of the quarter-mile fairgrounds oval’s action made it appear that many more checkered flags are in his near future. He was in a league of his own with his Pierce Race Car.

After surprising even himself with the alacrity he displayed in marching to the front, Pierce just stayed hard on the gas and kept putting space between himself and Marlar.

“It’s really weird — I wasn’t expecting to get the lead that soon,” said Pierce, who registered his 10th career Summernationals triumph. “When I did I was just like, ‘Man, it’s just lap 14 … there’s a lot of laps to go, so just be patient.'

“But when I went under Marlar there (for the lead), the car just really jumped off the corner and had a lot of bite so I was like, ‘Wow! We got a really good race car.’ ”

Pierce’s father, Bob, and his sister, Ciara, both tried to motion to him from the infield that he could cool his jets because he was so far ahead, but he was in such a good rhythm that he didn’t dare back off.

“My dad was giving me a huge, huge signal there for my lead,” Pierce said. “It’s hard, though, because when you slow down you kind of start messing up, so you just want to keep driving hard … that way everything keeps going smooth, so that’s what I did.”

With five laps to go Pierce pulled up to join the titanic tussle for third place between Kloos, Weaver, Babb, Jason Feger of Bloomington, Ill., Dennis Erb Jr. of Carpentersville, Ill., and Brandon Sheppard of New Berlin, Ill. He was primed to lap the entire group when Sheppard, who was in the field because his three-month suspension from UMP DIRTcar and World of Outlaws Craftsman Late Model Series events for a tire infraction during the June 9-11 Dream XXII at Eldora Speedway in Rossburg, Ohio, was under appeal, slowed with a blown right-rear tire.

“That was crazy,” Pierce said of being in position to lap through third place. “I saw that whole pack ahead of me and it’s all like Babb and Feger and Sheppard and all them, and I’m like, ‘Man, either they’re having a really bad night or I’m having a really good night.’ ”

It was Pierce having a really good night — a fact he relished.

“That’s awesome,” said Pierce, who padded his Summernationals points lead with his fifth top-five finish in as many starts. “There’s not very many times you get the opportunity to do that.

“I know we’re fast here — I won here last year — but three or four years ago I was getting lapped here, so this is pretty cool.”

Marlar, 38, had no answer for Pierce’s superior strength. He started from the pole position and led the race’s first 13 laps but had to settle for runner-up money.

“I didn’t know where he went,” Marlar said of Pierce. “I had a pretty good lead (on third) and I looked across the racetrack and I couldn’t see him so I was like, ‘I’m pretty sure he’s got behind me now.’

“That was pretty impressive how good they were. Congratulations to them guys … they eat, breathe and sleep this stuff, so they deserve all the success they’re having.”

Marlar succinctly summed up Pierce’s ownership of the evening when he was asked where Pierce’s car seemed to work best.

“Everywhere around the racetrack, really,” said Marlar, who also finished second to Pierce in the Summernationals opener June 16 at Kankakee (Ill.) County Speedway. “Like on the straightaways, entering the corners, through the corners, off the corners — he was just stuck to the earth.

“I think I had a pretty good lead on second and third, so I wasn’t terrible by no means. I could’ve been a little better, but I don’t know what you’re gonna do to beat that. He was pretty fast.”

Later, Greg Kimmons of Pleasant Plains, Ill., spun onto the inside berm in turn two on lap nine; Caleb Ashby of Cunningham, Tenn., slowed on lap 14; and Sheppard ran into trouble on the 37th circuit.

Among the race’s mechanical casualties were Hell Tour hopefuls Bob Gardner of East Peoria, Ill., whose car shut off because of electrical issues after three laps; Don Hammer of Clinton, Ill., who limped into the pits with a broken birdcage on lap nine; and Timothy Culp of Prattsville, Ark., who pulled off on lap 19 after climbing from 19th to the verge of the top 10.

Mike Marlar outgunned Bobby Pierce for the lead at the start and turned back repeated challenges from the Hell Tour points leader to take the win by 0.482 of a second. Brandon Sheppard finished farther back in third, while Timothy Culp pulled off the track with two laps to go.

Caleb Ashby outdueled Kevin Weaver for the lead at the start and marched on to take the victory by 0.337 of a second over the Illinois veteran. Shannon Babb was third.

Bobby Pierce ripped off a lap of 11.874 seconds in time trials, setting a new track record to top the qualifying session and earn the pole position for the third heat race.

Pierce's NTR came moments after Brandon Sheppard had lowered the mark 11.989 seconds. Mike Marlar, who was the last driver to qualify, also beat the old standard with a lap of 11.967 seconds.

Temperatures are in the high 80s under partly cloudy skies for the evening’s Hell Tour action. Forecasts don’t call for rain until the overnight hours. … The msot noticeable new Summernationals entrant is Brandon Sheppard of New Berlin, Ill., who is racing at a track virtually in his backyard one day after he was one of five drivers disqualified from the June 9-11 Dream XXII weekend at Eldora Speedway in Rossburg, Ohio, because of a tire infraction. He’s facing a three-month suspension from UMP DIRTcar- and WoO-sanctioned competition, but he can race tonight and in the remainder of this week’s Summernationals events because his potential penalties have been deferred until his appeal of the ruling is heard on June 27. … Also joining the Hell Tour field through the weekend is Dream XXII winner Dennis Erb Jr. of Carpentersville, Ill., a three-time Summernationals champion who has a break in his Lucas Oil Series schedule. … Shannon Babb of Moweaqua, Ill., has returned to action after skipping the three-race weekend in Wisconsin. … After scoring an uplifting fourth-place finish on Sunday night at Wilmot (Wis.) Raceway and an off day spent regrouping at his chassis builder Bob Pierce’s shop, Timothy Culp of Prattsville, Ark., has some renewed pep in his step. Culp, who scored a Summernationals career-best finish of second in last year’s stop at Jacksonville, repaired the car he crashed last Friday night at Cedar Lake Speedway in New Richmond, Wis., although he doesn’t have an engine to power it; he expects to take delivery of a freshened motor on Friday. … There’s some international flavor to Jacksonville’s program with the participation of Chris Cowling, a 30-year-old saloon and super saloon racer from Tauranga, New Zealand. Cowling has visited many Midwestern tracks in the past — a decade ago he spent several weeks as a crewman for Justin Allgaier, who now races on the NASCAR Infinity Series — but he’s making his first attempt at Summernationals competition. He’s driving a Rocket car wrenched by West Virginian Jacob Hawkins, who traveled to New Zealand with his brother, Jared, in January 2014 when Jared drove a car for Cowling’s family. Cowling, who plans to hit about 10 Hell Tour events during his stay in the States, made his Dirt Late Model debut last weekend in West Virginia and in his second start finished third at Tyler County Speedway. … Brent Larson of Lake Elmo, Minn., is continuing down the Summernationals road with his Arnie Ranta-owned Rocket car. The 39-year-old plans to follow the Hell Tour through the co-sanctioned WoO events on July 2-3 at Federated Auto Parts Raceway at I-55 in Pevely, Mo., and Lincoln (Ill.) Speedway and then run hook up with the WoO for Wild West Tour events in Iowa and Minnesota. ... Ryan Unzicker of El Paso, Ill., is back after missing Sunday night's show at Wilmot because mechanical trouble in his hauler kept him stranded in the Cedar Lake pit area until 7 p.m.

After a scheduled off day on Monday, the UMP DIRTcar Summernationals returns to action with Tuesday night’s Round 5 at Jacksonville (Ill.) Speedway. The quarter-mile oval hosts a 40-lap A-Main paying $5,000 to win.

The racing program, which includes UMP modifieds, is scheduled to begin at 7 p.m. CT.