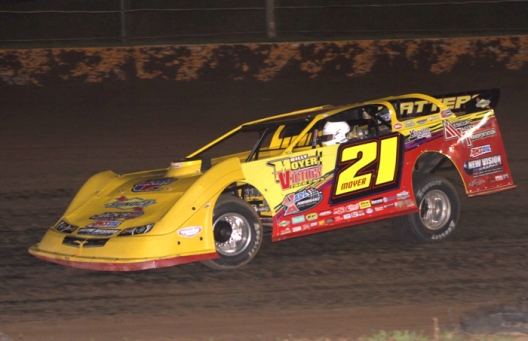 Moyer drove off the pole position to score an virtually uncontested $5,000 victory, the 91st of his career on the Summernationals to break him out of a tie atop the series’s win list with the absent Shannon Babb of Moweaqua, Ill.

“It makes me feel good,” said Moyer, whose first Summernationals triumph came nearly 30 years ago, on July 2, 1986, in the first official series event at Spoon River Speedway in Banner, Ill. “There’s a lot of these young guys coming up … it gives ‘em something to shoot for I guess.”

That includes the the 42-year-old Babb, who has been swapping Summernationals winningest-driver status with Moyer in recent years. With Babb choosing to skip the trip north and effectively give up on chasing a fifth career Hell Tour title, it was his former mentor who struck first in 2016 to move back ahead in their personal battle — less than nine months after Moyer announced he was retiring from full-time competition and would cut back his schedule this season.

“He’s gonna have to go back to work now, isn’t he?” Moyer said with a sly laugh when asked about Babb. “He’s home on the couch having fun, sitting in the air conditioner, while we’re out here beating up-and-down the road. It surprised me that he didn’t come.

“But like I said before, he’s younger than I am. I’m sure he’ll prevail at the end of this deal.”

Moyer’s closest pursuer for more than half the feature’s distance was third-starter Jason Krohn of Slayton, Minn., who overtook Jason Rauen of Farley, Iowa, for second place on lap 14 and never relinquished the spot. But the veteran 44-year-old driver couldn’t stick with the eventual winner after a lap-24 restart and settled for a runner-up finish, flashing under the checkered flag 3.325 seconds — nearly a full straightaway — behind Moyer to register his career-best Summernationals performance.

Fourth-starter Chris Simpson of Oxford, Iowa slipped out of the top five early in the race but rallied to finish third. Bobby Pierce of Oakwood, Ill., who won the previous night’s Summernationals opener at Kankakee (Ill.) County Speedway, placed fourth after starting 18th because mechanical trouble in his heat forced him to pull out his backup car and charge from the rear of the consolation field to grab a transfer spot and Jimmy Mars of Menomonie, Wis., made a late advance to complete the top five after starting eighth.

Rauen, who was the night’s overall fastest qualifier and started from the outside pole, ran in second place for laps 7-13 after rim-riding past Jason Feger of Bloomington, Ill., and Krohn but had fallen to sixth place when he spun down the homestretch on lap 24 after tangling with Mike Marlar of Winfield, Tenn. Rauen restarted at the rear of the field and finished 19th.

Moyer emerged victorious after experiencing a rough outing 24 hours earlier at Kankakee, where he slammed the cushion in turn four and damaged his car’s rear suspension. He opted to run his second car at Cedar Lake and regained his old form at the third-mile, high-banked oval, winning for the first time in six years at a track that he dominated in the late ‘80s and early ‘90s.

“I’ve always liked coming up here so it’s good to get one more,” said Moyer, who won Cedar Lake’s marquee USA Nationals five times in six years from 1988-1993 (and added a Summernationals triumph in ’94) but hadn’t visited victory lane there since a 2010 Hell Tour score. “We had it going our way here back then, that’s for sure, but we haven’t been quite as good lately.

“Tonight, (the track) sort of did resemble those old days. That black come and got really, really slippery, and you just kind of had to finesse it. I like it a lot better like that than when they got a cushion knee-deep and rough and wide-open around that top. The speeds are slower but I think the races are better.”

Moyer was able to set his Moyer Victory Race Car on cruise control and circle the speedway alone most of the way.

“The car was pretty darn good right off the get-go,” said Moyer, who has recorded just over 11 percent of his 809 career wins (including four this season) in Summernationals action. “When the car’s doing what you want it to do it makes everything feel a lot better for sure.”

Krohn made no argument that his MB Customs mount was fast enough to race with Moyer. When asked if he thought he had a shot at Moyer after the event’s third and final caution flag flew on lap 24 for Rauen’s spin, he had a quick answer.

“I didn’t,” said Krohn, whose only other Super Late Model starts this season came in January in Arizona and April in an MLRA-sanctioned doubleheader at Lucas Oil Speedway in Wheatland, Mo. “He’s smart he’s not gonna leave any doors open. He’s got crew guys out there and he’s pretty good at picking the fast way around the track.

“I just settled in there, but we’ll take that. For not running the open (motor) car very much, I guess getting second to Billy, I’ll have to be OK with that.”

Krohn actually felt fortunate to even have a shot at top finish. His race nearly came to an end on the opening lap when he slid sideways between turns three and four, triggering a multi-car stack up that saw Ricky Thornton Jr. of Chandler, Ariz., hit Krohn’s car and Feger, Nick Anvelink of Bonduel, Wis., Jordan Yaggy of Rochester, Minn., and Mike Mullen of Suamico, Wis., involved. With no laps completed, the drivers who didn't have to pit were able to reclaim their starting spots for the restart, saving Krohn.

“I just hate when other people get tore up because of what I did, so I apologize to the rest of the field. Luckily we were able to keep going … just a little nose damage, nothing major.”

The 32-year-old Simpson was hard on Krohn’s rear bumper several times in the closing laps but couldn’t complete a pass for second.

“We had a good car from the start,” Simpson said. “I’m just not much for that top stuff. We got up there and ran a little but I just couldn’t keep up like Jason (Rauen) could (early).

“We went to the bottom and picked off a few and we had a really good car at the end. I know Krohn had a 30 (compound right-rear tire) on, so a couple more laps and I think I would’ve had him. I don’t know if we would’ve had anything for Moyer.”

The feature field rolled onto the racetrack at 10:05 p.m. CT. ... Polesitter Billy Moyer captured his first Summernationals event at Cedar Lake in 1994; he also won on the series here in 2010. If he wins tonight he’ll break a tie with the absent Shannon Babb atop the Hell Tour’s all-time victory list with his 91st career triumph. … Fast-timer and outside polesitter Jason Rauen finished fourth in the 2011 USA Nationals at Cedar Lake after leading much of the distance. … Third-starter Jason Krohn is just two weeks removed from the biggest Dirt Late Model victory of his career, a $10,000 WISSOTA Challenge Series score on June 4 at Dakota State Fair Speedway in Huron, S.D. … The joy of Bobby Pierce’s opening-night Summernationals victory became a distant memory after he experienced mechanical trouble with three laps remaining in the first heat. He was running second when smoke began to trail from his car, forcing him to retire and pull out his second machine for the B-Main; he charged from the back of the pack in the 10-lapper last-chance event to finish third and transfer to the feature. … Allen Murray had problems in the second heat, spinning in turn three and then pulling into the infield. He will start the feature, however, thanks to a provisional. … Other provisional starters are Mike Spatola, Gordy Gundaker, Rodney Melvin, Mike Fryer and Ryan Unzicker, a Hell Tour favorite who had to rely on a provisional for the second straight night. … Missing the feature cut was Don Hammer, who was a late arrival after experiencing hauler trouble en route to Cedar Lake.

Teams arriving at Cedar Lake Speedway were greeted by gorgeous conditions with temperatures about 80 under partly cloudy skies. An unexpected threat of rain, however, has popped up to the west as race time neared, however. … Missing from the weekend’s field is four-time Summernationals champion and Hell Tour co-alltime win leader Shannon Babb of Moweaqua, Ill., who decided to bypass the long overnight trip from Kankakee, Ill., and effectively take him out of contention for the series title. The 42-year-old driver who is still searching for his first victory of 2016 is expected to rejoin Summernationals action on Tuesday night at Jacksonville (Ill.) Speedway. … Billy Moyer of Batesville, Ark., has gone to his second car for Friday night’s action, parking the Moyer Victory Race Car he damaged at Kankakee Thursday night when he slammed hard into the turn-four cushion early in the feature. … Jordan Yaggy of Rochester, Minn., who isn’t chasing the full World of Outlaws tour this season, enters the weekend’s action coming off an extreme up-and-down MLRA-sanctioned doubleheader two weeks ago. He finished a solid second on June 2 at Southern Iowa Speedway in Oskaloosa, Iowa, but then slammed the outside wall on the first lap of his heat the following evening at Lee County Speedway in Donnellson, Iowa, forcing him to take his Rocket XR1 car to the Rocket shop in Shinnston, W.Va., for repairs. “We’ve been pretty good when I don’t screw up,” Yaggy bottom-lined. “The car’s real good if the driver keeps his head.” … Bob Gardner of East Peoria, Ill., has a big smile on his face after registering a career-best Summernationals finish of seventh at Kankakee — a run that has him energized even though he might be a little physically tired after making the longest overnight haul he’s ever attempted and unloading his car in the Cedar Lake pits at 8:30 this morning to begin work on finding some minor issues that developed on Thursday night. … The Gardner and Jason Feger haulers are linked by netting that’s hanging from their trailers’ lift gates, providing some extra shade from the afternoon sun. “I stole the idea from Scott (Bloomquist),” Feger quipped. “I found the netting at Menards and we tried hanging it up to see if we could cool things off.” Feger said the netting lowers work temperatures for his crew by a good 20 degrees. “We did infrared testing to check that,” he said with a laugh. … One week after his head-turning Eldora Speedway debut during the Dream weekend, Ricky Thornton Jr. of Chandler, Ariz., is back behind the wheel of Baldwin, Wis., team owner J.R. Haley’s Club 29 machine. He will pull double-duty as he also competes in the companion USMTS modified action. … Also running in both the Dirt Late Model and modified divisions is Rodney Sanders of Happy, Texas.

After the long overnight haul of roughly eight hours and 450 miles, the UMP DIRTcar Summernationals rolls into the 3/8-mile Cedar Lake Speedway for Round 2 of the 28-race series. The Hell Tour will stay at Cedar Lake for two consecutive nights of competition as part of the track’s annual Masters weekend.

The Summernationals headline Cedar Lake’s Masters program for the seventh year in a row. On three occasions — 2010, ’12 and ’15 — both ends of the doubleheader were able to beat the weather. Jason Feger captured last year’s finale, Billy Moyer Jr. swept the twin bill in ’12 and Brian Birkhofer won the big $10,000 prize in '10.