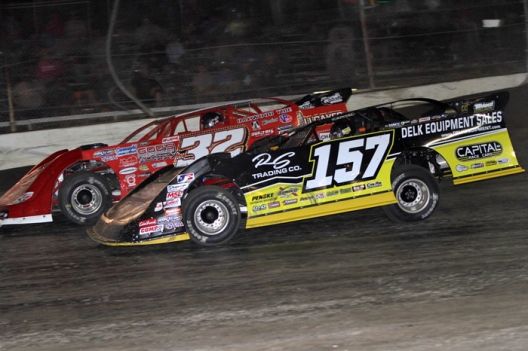 And after outdueling Mike Marlar of Winfield, Tenn., to capture Thursday night’s 40-lap Hell Tour opener at Kankakee County Speedway, Pierce just might be in position to ring up wins on the series at a clip he’s never achieved before.

“A lot of times you’re searching for just one win throughout the tour, so to just get it out of the way as soon as possible is really cool,” said Pierce, whose single-season career-high victory total on the Summernationals came in 2013 when he won four races, including one at Kankakee. “Last year I won twice. The year before that I won only one. So starting off the year with a win is really good.

Pierce, 19, might not be able to sweep the grueling month-long series, but worked hard to claim its first $5,000 top prize. He traded slide jobs with Marlar at each end of the quarter-mile, high-banked oval for five consecutive laps before finally seizing command on lap 26 and then controlling the remainder of the distance in a machine built by his father Bob.

Marlar, who started second and led the race’s first 25 laps, was hampered throughout the second half by a loss of power steering but held on to finish in the runner-up spot in his first start at Kankakee since he finished third in an August 2007 Lucas Oil Late Model Dirt Series event.

Frank Heckenast Jr. of Frankfort, Ill., who won his first-ever Summernationals feature last year at Kankakee, inched forward from the fifth starting spot to finish third in a Capital Race Car that sported a new front clip after he crashed hard on June 10 at Eldora Speedway in Rossburg, Ohio. Heckenast’s cousin, eighth-starter Mike Spatola of Manhattan, Ill., placed fourth and Jon Henry of Ada, Ohio, advanced from the 16th starting spot to complete the top five in a Club 29 Race Car he obtained from Heckenast less than two weeks ago.

Pierce, who started third, fought past polesitter Tanner English of Benton, Ky., for second place on lap two and proceeded to commence chasing Marlar. It wasn’t an was task.

“Tonight they had more banking on the top — a lot more banking actually,” Pierce said. “It was like Tazewell-type banking, and with the cushion being there it made it really treacherous and difficult in (turns) three and four. (Turns) one and two and three and four were like two completely different corners, so it was real challenging to get through there.”

Marlar, 38, maintained a short lead over Pierce until he experienced mechanical trouble in his Capital Race Car just before the halfway mark.

“I had to be really careful because my power steering went out on lap 19,” Marlar said. “It went out here going into turn three. I come down the back straightaway and it blew the power steering line, so when I went into the corner it was pumping fluid out but it still had fluid in it. It’s like it didn’t know which way to go … it was yanking the oil right and left, so it took about a lap to pump it all out and it took me about two more laps to figure out how to get it around the racetrack without hitting the cushion or hitting somebody.

“While I’m trying to fight all that, Bobby started trading slide jobs with me and then I’m trying to get him back without power steering and trying not to run over him. It was a handful.

The leaders put on an entertaining show for five laps, with Pierce diving to the inside of turns one and two to slide ahead each circuit and then Marlar manhandling his car to cross under Pierce and surge back in front at the other end of the track.

“Mikey was hanging on,” Pierce related. “I heard (after the race) his power steering went out … right when it started smoking, I could tell that he moved down from the cushion just a little bit. He almost got faster when he did that actually, so I was just trying to find a way to hit my lines and not run over him, just make a nice, consistent lap through the ruts. I got that good run there and set him up getting into one and we just traded sliders back-and-forth a few times before I finally got him.

“After slider after slider, it finally got to the point where I was just enough ahead of him getting into one to where I could kind of control the slide job a little bit better,” he continued. I could actually slow down and run a smoother line rather than just banzai-ing in there. That’s kind of what did it … it was real fun racing.”

Marlar couldn’t mount another another charge and finished about a half-straightaway behind Pierce.

“Congratulations to Bobby,” Marlar said. “He got by me there and there wasn’t nothing I could really do. I couldn’t really race him.

“We got started off on this deal pretty good tonight though. Honestly, I felt like we should’ve had a win, but we just had some problems.”

Pierce nearly had a problem of his own in the closing circuits. His car sported right-rear bodywork damage from an apparent bout with the cushion between turns three and four and he had a deflating tire.

“My right-rear tire was actually going flat, so we got pretty lucky,” said Pierce, whose tire indeed lost its air during the victory lane ceremonies.

Three caution flags slowed the feature, including two before an official circuit was even completed.

The first opening-lap incident involved fourth-starter Billy Moyer of Batesville, Ark., whose car slowed with body, suspension and other damage after he bounced hard over the cushion in turn four. On the ensuing restart a scramble through turns one and two caused Billy Moyer Jr. of Batesville, Ark., to slide through the infield in turn two, kicking up a cloud of dust that resulted in Steve Thorsten of Milford, Ill., smashing into a infield tractor tire — sending the tire rolling away — due to his loss of visibility.

Later, on lap 12, another caution flag was needed for an infield tractor tire that was pushed onto the racing surface between turns one and two.

After drawing the pole position for the 40-lap A-Main, Tanner English feels good about his chances for victory. “If I can just hold on up there, we’ll be good,” English said, noting that the cushion was quite substantial through turns three and four. The second-generation driver is shooting for his first-ever Summernationals triumph behind the wheel of his Rocket XR1 car, which he steered to his first win of 2016 last weekend at Fayette County Speedway in Brownstown, Ill. … Outside polesitter Mike Marlar won his heat race but had some right-rear spoiler damage to repair after getting together on the original start with Mike Spatola. … Billy Moyer Jr. broke a rearend during hot laps in a car that was assembled for him at Karl Performance, forcing him to pull out a second car that he put into the feature through his heat. … Allen Murray’s car trailed smoke at the end of his heat race but it didn’t appear to be serious. “I think it was just some oil pushing out,” he said. “At least we’re hoping that’s what it was.” ... Provisional starting spots for the feature went to Glen Thompson, Billy Hough, Jay Morris and Ryan Unzicker.

Mike Marlar led all the way to emerge victorious, but Frank Heckenast Jr. moved into second early and stayed within three car lengths of Marlar in the race's late stages. Mike Spatola settled for third followed by Rodney Melvin and Allen Murray, whose car showed smoke at the checkered flag.

Bobby Pierce of Oakwood, Ill., was the overall fastest qualifier in the group time trials, turning a lap of 13.786 seconds to earn the pole position for the evening's first heat race.

Other heat polesitters will be Mike Marlar of Winfield, Tenn., and Tanner English of Benton, Ky.

Jason Feger of Bloomington, Ill., was fourth-fastest in the first qualifying group, but his crew had right-rear bodywork damage to repair after he got into the wall during his time-trial laps.

The rainout Wednesday night’s scheduled Summernationals opener at Brownstown (Ind.) Speedway was no great disappointment for prospective series regulars who competed in last weekend’s Dream XXII presented by Ferris Mowers at Eldora Speedway in Rossburg, Ohio. “When it was 10 in the morning and I heard it was rained out I said, ‘O.K., let’s unload and get to work,’” said Jason Feger of Bloomington, Ill., who was able to finish a spare nosepiece and complete additional work to get him better prepared for the Hell Tour. Bob Pierce also relished an extra day off; he said he and his son Bobby had two very busy days making two new decks for the pair of cars Bobby damaged at Eldora. … Frank Heckenast Jr. of Frankfort, Ill., is ready to defend his 2015 Summernationals victory at Kankakee after having a new front clip put on his Capital Race Car, which was heavily damaged in an accident last Friday night at Eldora. His car was at Capital’s shop in Woodstock, Ga., Monday morning for the repairs and was back at Heckenast’s shop by 6 o’clock Tuesday night. … Shannon Babb of Moweaqua, Ill., has his Club 29 Race Car unloaded for action tonight after running his Rocket XR1 in most recent events. … In an effort to cut down on the number of tires teams must carry with them, UMP director Sam Driggers has instituted a new tire rule for the Summernationals that mandates Hoosier LM-20 compound tires on all corners of the car save the right-rear, on which teams can bolt either 20-, 30- or 40-compound rubber. “I’ll be the first to admit that some are gonna love it and some are gonna hate it,” Driggers said of the rule. “We may have to change it after seeing how it works, but we’re gonna go with it starting tonight.” One note on the tire rule: a 55-compound tire will be allowed as a right-rear option at the next three Summernationals events in Wisconsin. … Among the drivers expressing support for the tire rule were Feger and Mike Marlar of Winfield, Tenn., who said the rule was the primary reason he decided to head north and run at least the first week of the Hell Tour schedule. … Allen Murray of San Antonio, Texas, is on the Hell Tour for the first weekend of competition as he heads east to take his first-ever stab at the June 23-25 WoO-sanctioned Firecracker 100 at Lernerville Speedway in Sarver, Pa. … Gordy Gundaker of St. Charles, Mo., Bob Gardner of East Peoria, Ill., and Don Hammer of Clinton, Ill., are among the drivers with hopes of following the full Summernationals scheduled for the first time in their careers. … Jon Henry of Ada, Ohio, is looking to run at least the first week of the Summernationals.

After the scheduled UMP DIRTcar Summernationals opener at Brownstown (Ind.) Speedway was rained out on Wednesday night, the Hell Tour kicks off Thursday evening at Kankakee County Speedway, a stalwart track in the series’s long history. Tonight’s $5,000-to-win 40-lapper marks the 27th Summernationals event contested at Kankakee, which was part of the inaugural series in 1986.

Billy Moyer of Batesville, Ark., has won nearly one-third of the Summernationals races at Kankakee, claiming a record eight victories at the track. The 58-year-old, who is in tonight’s field, scored his first Hell Tour triumph at the 3/8-mile oval in 1987 and his most recent came last year.

Other past Summernationals winners at Kankakee who are on hand tonight are Bobby Pierce of Oakwood, Ill., Shannon Babb of Moweaqua, Ill., Mike Spatola of Manhattan, Ill., and Frank Heckenast Jr. of Frankfort, Pa., who recorded his first-ever Summernationals triumph in last year’s event.

The evening’s action is scheduled to begin with hot laps at 6:15 p.m. CT.