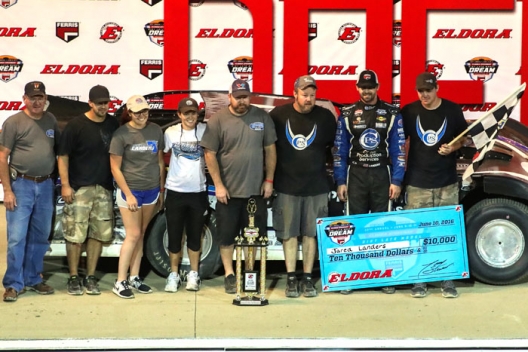 ROSSBURG, Ohio — No one is ever disappointed to be on the winner’s stage at Eldora Speedway, but after Friday’s preliminary victory for Dream XXII presented by Ferris Mowers, Jared Landers plans to return sooner rather than later.

“I hope we didn’t win on the wrong night,” the Batesville, Ark., driver said after winning a caution-free 25-lapper to collect $10,000, one night before track owner Tony Stewart will sign a $100,000 Dream paycheck.

Landers pulled off a daring slide job on the 15th lap, overtaking front-row starter and race-long leader Gregg Satterlee of Indiana, Pa., and pulling away to take the checkers 2.9 seconds ahead of polesitter and six-time Dream winner Scott Bloomquist of Mooresburg, Tenn.

Even if Friday’s check had one fewer zero than Saturday’s, Landers was glad to take the checkers ahead of Bloomquist, Satterlee, Ricky Thornton Jr. of Chandler, Ariz., and 16th-starting Tim McCreadie of Watertown, N.Y.

“This is awesome, to win the race here. This car’s great,” said Landers, who led laps at last year’s Dream and World 100 at Eldora. “My crew worked their butt off today trying to fix everything from the track last night. We rebuilt the car and we worked toward this setup and we finally got one. We’ve got it all back like it was when I was at the World, so it’s still good.”

With a reputation as an aggressive driver, Landers didn’t let his fans down in charging toward the checkers in the second of twin 25-lappers. Brandon Sheppard of New Berlin, Ill., won the first 25-lapper.

“I’m not going to let lapped traffic hold me up,” Landers said. “If it takes me out of the race, I’ve just got to do it. I can’t follow these guys. I’ve just got to take it when I get it. That’s what I was practicing tonight, I just wanted to pass as many cars as I was able to. I think we’ve got a car to win (Saturday’s) race.”

Bloomquist’s second-place ran was a drastic improvement over Thursday night when he blew a tire in hot laps, missed his qualifying lap and failed to make a preliminary feature after showing up late to the grid in a consolation race.

“We just had a number of things happen last night that were out of our control,” Bloomquist said. “We put in a decent night tonight. It will probably start us somewhere in the middle of a heat race tomorrow. But we’ve come from farther back.

“Just like a lot of times, our car just needed to take a little time to get going. Then once it gets rolling … we’ll be there at the end of the race. That’s the main thing. I think we’re really close. We’ve got a little bit of fine tuning left to do and I think we’re going to be ready.”

“Last night was a disaster. From the time we unloaded until we loaded up last night, it was just nothing but a struggle,” Satterlee said. “We got regrouped today and made a bunch of changes, got the motor running a little better and was able to qualify good. We had a little luck in the heat race with a late caution and was able to get a good starting spot in the feature.

“We were a little softer on tires, so I kind of slowed down there at the end. But all-in-all a top-three is something to build off for tomorrow.”

Satterlee jumped into the lead at the outset with Landers and Bloomquist in pursuit while Jonathan Davenport, last year’s Dream winner and a Thursday winner, was further back in fourth with Thornton just behind.

Landers ran virtually side-by-side with Satterlee on the seventh lap before Satterlee moved back ahead, and action picked up near the race’s midpoint as Satterlee, Landers and Bloomquist worked through the slower cars of Rusty Schlenk and Jason Jameson.

With traffic still in play, Landers dove under Satterlee entering turn three and came out on top in turn four, then edged away to complete the his first Eldora victory.

Points accrued in Friday’s racing will be added to Thursday’s points, setting up the heat race lineups for Saturday’s action that precedes the weekend-capping $100,000-to-win main event.

Polesitter Jeep Van Wormer charged to the lead at the drop of the green flag, pulling away. Slipping past third-starting Jay Johnson, fourth-starting Rusty Schlenk took the second-place spot. The top two distanced themselves from the field as a three-car battle unfolded for the third-place spot. Van Wormer won the consolation, with Schlenk finishing second. Chris Simpson finished third, with Chase Junghans grabbing the fourth and final transfer spot over Dustin Nobbe.

Chase Junghans’s Eldora struggles continued when he lost a motor after starting on the pole of the second heat. The young Kansan was changed into street minutes mere minutes after his car was pushed back to his hauler trailing a long line of fluid; his team unloaded their second car and will likely switch to it for Saturday night’s action. … Devin Moran’s evening came to an early end with terminal engine trouble; problems surfaced during hot laps and Moran attempted to qualify but had no power, prompting his crew to immediately pull the powerplant. They will install a backup motor for Saturday’s program after cleaning out the car’s fuel and oil systems. … Eldora rookie Ricky Thornton Jr. picked up where he left off with his 14th-to-second run in Thursday night’s second feature, surviving a slap of the outside wall that bent the right-rear corner of his J.R. Haley-owned car to win the sixth heat. “This place is awesome,” Thornton said when pit reporter Ben Shelton asked how much fun he’s having. … Jon Henry was ecstatic after capturing the eight heat. “It’s really great to get a race car that really fits your style,” he said of his former Frank Heckenast Jr.-driven Club 29 Race Car. “I can’t believe I just beat Scott Bloomquist!”

Sliding ahead of polesitter Jeff Babcock coming out of turn four, third-starting Jon Henry took an early lead. Second-running Scott Bloomquist began reeling in the race leader, but it wouldn’t be enough, as Henry led flag-to-flag to win the fourth heat race. Bloomquist finished second, with Babcock running third. Tim McCreadie ran fourth, with Mike Marlar working his way back to fifth after falling back on the initial start.

Running side-by-side as they exited turn four, polesitter Ricky Thornton Jr. pulled ahead of third-starting Wendell Wallace to take an early lead. Thornton tagged the turn-two wall on the third lap, but was able to stay at the front of the field. A yellow flag flew on lap four for debris on the racing surface. Using the restart to his advantage, fourth-starting Gregg Satterlee moved in to the runner-up spot, battling with outside polesitter Austin Smith who had fallen back on the start. Distancing himself from the field, Thornton won the third heat, with Satterlee running second. Smith finished third, with Terry Phillips running fourth. Wallace finished fifth to transfer to the feature.

Polesitter Shannon Babb edged ahead of third-starting Jared Landers to lead the opening lap, as fourth-starting Josh Richards slipped back to sixth. Babb pulled away from Landers to win the second heat, with Landers running second. Working his way back to the front, Richards outdueled outside polesitter Jimmy Mars for the third-place spot. Mars ran fourth, with Jason Jameson grabbing the fifth and final transfer spot.

Going three-wide with the front row starters coming out of turn two, third-starting Jonathan Davenport shot to the lead on the opening lap, with outside polesitter Jeep Van Wormer tagging the turn four wall. Working around the bottom of the racetrack, fifth-starting Earl Pearson Jr. began reeling in Davenport at the halfway mark, with a yellow flag waving on lap seven when Chase Junghans lost an engine and slowed in turn four. Davenport held off Pearson’s challenges as the race went back green, picking up the heat race win. Sliding ahead of Pearson in turn four, Don O’Neal finished runner-up at the checkers. Pearson ran third, with Eddie Carrier Jr. finishing fourth. Steve Francis ran fifth to transfer to the feature.

Qualifying note: Austin Rettig, on his 22nd birthday, got into the wall on his first qualifying lap, damaging the right-front of his No. 94.

Brandon Sheppard picked up a bruise to go with his victory in Thursday night’s first 25-lap preliminary feature. He absorbed a blow to his shoulder from a flying clod of clay during the race, leaving him with some soreness. “That cushion was just chunking up and stuff was flying at you when you got to lapped traffic,” said Sheppard, whose crew chief, Randall Edwards, reported that clay smashed into Sheppard’s spoiler with such force last night that a new spoiler had to be installed for tonight’s action. … Bob Pierce said his son, Bobby, will be behind the wheel of the same car he damaged in last night’s second feature when he hit Steve Casebolt’s slowing machine. A new rear end was installed in the mount and the rear deck from Pierce’s primary car, which was sidelined by engine trouble in Thursday’s hot laps, was transferred to the second vehicle. … Casebolt’s team also was busy after Thursday’s program replacing the rearend and rear suspension on his Rocket XR1. … Rodney Sanders made an engine change following Thursday night’s action, but it was not because he experienced motor problems. He had a freshened, more powerful Clements engine delivered to him in the pits on Thursday and he decided to bolt it in for the remainder of the weekend. … Scott Bloomquist had quite the Thursday night. Not only did he blow a left-rear tire in hot laps (damaging his bodywork and suspension), miss qualifying making repairs, fail to transfer in a heat race and then finish one lap down in a B-main because he wasn’t on the track to take the green flag, but he also borrowed tools from his pitside neighbor Jason Feger because he did not have his toolbox in his trailer. Feger said Bloomquist has access to his equipment tonight after Bloomquist’s crewman, Cody Mallory, arrived with the team’s toolbox this afternoon. … Eddie Carrier Jr.’s Rocket XR1 is back together after it was damaged when he hit Rusty Schlenk’s machine in turn four during Thursday’s first heat. “We actually didn’t have as much damage as we thought,” said Carrier’s father, Eddie Sr. The impact with Schlenk bent up the right-front suspension and nose on Carrier’s car and even ripped off its air cleaner, but his team had the car patched up enough to take a few B-main laps to accumulate some points and finished the repair job today. … Texan Chris Brown had to fix the right-front suspension and rear deck of his car after he slapped the wall between turns three and four while running in the top 10 of Thursday’s second feature. “I think the car was better than I was,” Brown quipped.

Hot laps are scheduled for 6 p.m., but because of extra track prep with rain earlier in the day, practice will likely be delayed at least a few minutes. … The official car count is 72 for the second consecutive night, it’ll actually be 71 cars because Duane Chamberlain of Richmond, Ind., has elected not to compete. Bothered by a neck injury that’s caused headaches the last few weeks, he’s going to get checked out again by a doctor after competing Friday night. … Matt Miller of Whitehouse, Ohio, isn’t in action after a hard turn-three crash in Thursday’s heats, while Tim Lance of Brimfield is a new entry. His No. 48 was hauled to Eldora by fellow Illinois driver Jason Feger.