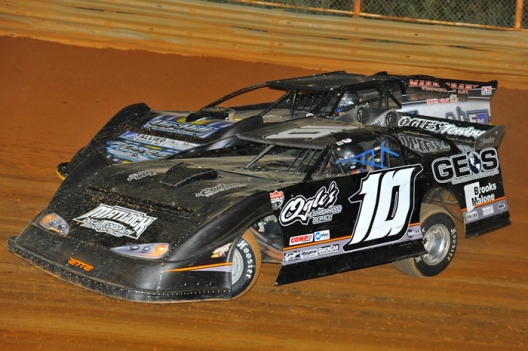 Michael Moats/mrmracing.net
Chad Ogle heads to a Carolina Clash victory at Volunteer.
What won the race: Chad Ogle of Sevierville, Tenn., took the lead on lap 21 as race leader Donald McIntosh dropped out of the event, then went on to dominate the remainder of the race for the Carolina Clash victory at Volunteer Speedway.
Quotable: "McIntosh looked like he had the car to beat," Ogle said. "I don't know if he pulled in, broke or what, but he was coming. I got back by him, but I may not could've held him off. He was flying on the bottom, so I'm thankful we won the race."
Key notes: The win was Ogle's second career Carolina Clash victory. ... His first came last season in an event that was also at Volunteer. ... The event was slowed by two caution flags on laps 20 and 21.
On the move: Dustin Linville of Bryantsville, Ky., who started 20th and finished eighth.
Winner's sponsors: Ogle's Rocket Chassis is sponsored by Geo Services and Geotechnical & Materials Engineers.
Points chase: Entering the event, Johnny Pursley of Clover, S.C., leads the standings (562) over Ross Bailes (537) and Dennis Franklin (514).
Car count: 26
Fast qualifier: Ricky Weiss
Time: 12.032 seconds
Heat race winners: Johnny Pursley, Jordon Horton
Next series race: June 14, Laurens County Speedway (Laurens, SC) $3,500
Editor's note: Results and race details are unofficial.