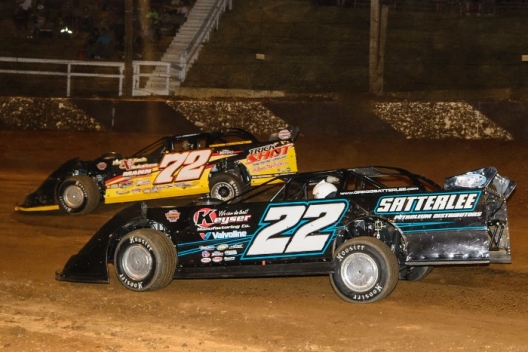 Returning to the track where he started his racing career in 1987 for the first time in nearly 15 years, the 45-year-old driver from York Haven, Pa., registered an emotional $4,000 triumph in Monday night’s 40-lap Appalachian Mountain Speedweek presented by DirtonDirt.com feature at Path Valley Speedway Park.

Covert called on all his old knowledge of the high-banked, quarter-mile oval to outduel Gregg Satterlee of Indiana, Pa., for the lead just after the race’s midway point and then pull away from the pack after Satterlee’s hopes were dashed by a right-rear flat tire on lap 31.

Covert, who grew up just 10 minutes away from Path Valley, controlled the action after Satterlee’s demise and steered his Cameron-Mann Motorsports Rocket XR1 car across the finish line with a half-straightaway edge over defending AMS champion Jeff Rine of Danville, Pa. Rine started 11th in his Longhorn Race Car and inherited the runner-up spot on lap 31 when Satterlee pitted for a tire change.

Justin Kann of Huntingdon, Pa., moved up from the eighth starting spot to finish fourth and Danny Snyder of Green Lane, Pa., survived several body-damaging scrapes during the evening to earn hard-charger honors with an advance from the 22nd starting spot to a fifth-place finish.

Satterlee’s misfortune ended the titanic battle for the lead he waged with Covert, who moved forward from the sixth starting spot to run second by lap four and then assumed command for the first time on lap 13 when Satterlee had problems on the cushion in turn two. The two good friends then raced side-by-side for multiple circuits, with Satterlee slipping ahead to lead laps 23-24 before Covert regained the top spot on lap 25.

After the first 13 laps were slowed by nine of the rough-and-tumble event’s 10 caution flags, Covert and Satterlee went at it hard during the longest green-flag stretch of the feature. It appeared that their struggle was destined to go down to the wire until Satterlee ran into trouble.

Covert had one word to describe his race with Satterlee: “Intense.”

“I was (chasing) after him, and then he gets over the cushion a little bit (on lap 13) to give me the lead and then he gets after me,” Covert said. “I overheated my tire racing him so I went to the lip … then I was like, Where’s he at? I saw he blew a tire and I’m like, ‘Ah.’

Satterlee, 31, was similarly thrilled by the close race with Covert.

“I don’t think it could get a whole lot better,” Satterlee said. “I don’t know how many laps it lasted … eight or 10?

“It’s always fun when you can race like that. He was kind of in the middle, I was almost in the infield. We used almost all of the racetrack.”

It was a mistake that cost Satterlee the lead that he could never quite get fully back in his grasp.

“I just hit the cushion with my right-rear (on lap 13),” said Satterlee, who started from the outside pole and surged into the lead at the initial green flag. “That thing was just getting bigger and bigger every lap. I thought I was faster when I could use it, and I just got into it a little too hard. I just kind of slid up to it and I got away from it for a second, and then smashed back into it. It just lifted the whole car up on top of it. I pretty much had to stop and Covert went flying by.

“I caught back up to him and I think I was ahead of him a few times (at the start-finish line), but I never really got all the way by him. I was just trying to be patient … I thought when we cleared the lapped cars I could get back to him and go for it at the end, but my right-rear tire cut down and that was the end of it. I think it got a hole in it, ran a little low on air and then it blew up.”

Satterlee wasn’t dejected afterward, however. He enjoyed his first-ever visit to the Path Valley bullring.

“It’s a fun little place,” Satterlee said. “I’d come back for sure.”

Covert certainly wouldn’t have to be enticed to return. He had been anxiously awaiting the chance to compete at Path Valley for the first time since he won a 358 Late Model feature in September 2001.

“When this come on the (AMS) schedule (in 2015), you don’t know how much it meant,” said Covert, whose anticipation level for Path Valley’s biggest Super Late Model event ever rose even higher after last year’s AMS stop was rained out. “To have this happen, and to race Gregg like that … that’s one of my best buddies.

“I thought the track was absolutely fantastic. I think they did a fantastic job … you could race, it was fun. The fans should’ve loved it … I loved it. Gregg and I had an awesome race.

“I’m just overwhelmed,” he added. “I’m gonna savor this one for a long time. I’ve said it a lot, I’m way closer to the end of what I started than I am the beginning, and you gotta really treasure the ones you win because you don’t know if it’s gonna be your last.”

Rine, 38, briefly nosed underneath Covert following the lap-31 restart but couldn’t maintain contact with the leader. He settled for a satisfying runner-up finish.

“I’m used to racing on a big half-mile and this is pretty neat,” Rine said. “I raced a micro-sprint here in about 1993 or ’94 and this is whole different deal here. This was a fun little place.”

Notes: Covert scored his third career AMS victory and first since June 1, 2013, at Hagerstown (Md.) Speedway. It was his third overall triumph of 2016. … Kenny Pettyjohn of Millsboro, Del., earned a $300 bonus for recording the fastest overall qualifying lap but had a short-lived feature run. He was in second place on lap four when he slid sideways between turns three and four and was hit by polesitter Waylon Wagner of Lewistown, Pa., and Ralph Morgan Jr. of Mount Union, Pa.; only Wagner continued. … Austin Hubbard of Seaford, Del., moved from 12th to third early but spun in turn one on the fifth lap and was hit softly by Tim Wilson of McClure, Pa., ending his night. Hubbard had repaired his car after it sustained bodywork damage in a heat-race hit he received from Andy Fries of Mercersburg, Pa., that sent both cars spinning in turn three (though both still qualified). … Matt Cosner of Ridgely, W.Va., stopped on the track with terminal engine trouble on lap seven while running in seventh place. The malfunction came two weeks after he experienced problems with his other powerplant. … Second-starter Dan Stone of Thompson, broke a torque arm on the opening lap. ... Coleby Frye of Dover, Pa., was running seventh on a lap-four restart when he slid backwards into the turn-two wall and limped off the track. … Dylan Yoder of Selinsgrove, Pa., broke a motor in hot laps and was done for the night. ... AMS co-promoter Kurt Smith said the event, which was postponed to Monday because of weekend rain, drew a crowd that pleased Path Valley’s promoters. … The AMS has a two-day break before resuming with its concluding weekend on Thursday and Friday at Hesston (Pa.) Speedway; Saturday at Hagerstown (Md.) Speedway; and Sunday at Selinsgrove (Pa.) Speedway.