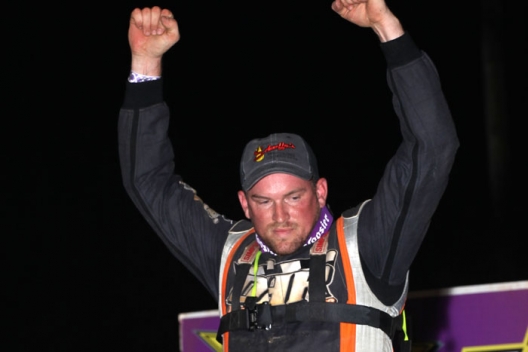 GEORGETOWN, Del. (June 2) — With victory in sight Thursday night at Georgetown Speedway, Dale Hollidge of Mechanicsville, Md., watched in near horror as Rick Eckert of York, Pa., surged by him in lapped traffic to grab the lead on lap 38 of the Ultimate Super Late Model Series-sanctioned First State 40.

But Hollidge, 27, wasn’t about to let a major victory slip through his fingers, so he gassed up his Greg Gunter-owned machine with authority and sailed right back around the 50-year-old Eckert to claim the $5,000 top prize in the opener of the Ultimate tour’s four-race Colonial Clash mini-series.

“With the lapped cars, they (officials) were telling them on the radio (that the leaders were approaching),” Hollidge said after securing his first-ever triumph on the Ultimate Series. “It’s not them guys’ job to move, but there really wasn’t nowhere for me to go. I knew somebody was gonna be coming so I had to do something, and once Rick passed me I thought, Oh, my goodness. If I go back to the trailer losing this race, they’re gonna ride me up-and-down, so I better try to make something work.

Indeed, after Eckert slipped ahead of Hollidge rounding turns one and two on lap 38, Hollidge made sure the World of Outlaws Craftsman Late Model Series regular didn’t officially lead a circuit. Hollidge tossed his Rocket XR1 car to the extreme outside of the sprawling half-mile oval’s third and fourth turns, vaulted back in front of Eckert off the fourth corner to pace lap 39 and held on to defeat Eckert’s Paul Crowl-owned Longhorn mount by several car lengths.

Gregg Satterlee of Indiana, Pa., who started from the outside pole and led laps 1-11 before ceding the top spot to Hollidge, raced within striking distance of the pacesetters during the final frenetic circuits but settled for a third-place finish in his Rocket XR1. Ricky Elliott of Milford, Del., advanced from the 11th starting spot to place fourth in his third start of 2016 driving his new Lazer-X car and Walker Arthur of Forest, Va., completed the top five in his MasterSbilt vehicle.

Making his second career start at Georgetown, Hollidge raced out of the second starting spot to claim not only his first victory away from his usual weekly haunts — Potomac Speedway in Budds Creek, Md., and Winchester (Va.) Speedway — but also his most important triumph since his stint driving for Gunter began at the start of the 2016 season. Prior to Thursday night Hollidge had scored two wins at Potomac and one at Winchester this season.

Hollidge proved he’s continuing to develop as a Dirt Late Model driver with his road-show performance, showing off some slick moves both early and late to break into victory lane. After starting third he took the lead from Satterlee on lap 12 with an outside power slide much like he would use later to stave off Eckert.

“I wasn’t too thrilled about them (Delaware) double-file restarts (that leave the leader alone out front), so I figured if they was gonna make me start from the outside (of the second row) I was gonna make something of it. I got in there to (turns) one and two (running third behind Satterlee and Eckert on a lap-five restart) and I thought, Well, that wasn’t too bad, so let’s try it again in three and four. Three and four actually wasn’t too bad … it had a little bit of a cushion built up off the corner and I could just lean against just right.”

Hollidge sailed around the outside of Eckert through turns one and two immediately after the green flag flew on lap five. He then chased Satterlee for several circuits before using the top side of turns three and four to assume command on lap 12.

“Once I cleared (Satterlee), I figured, ‘I’ll just move back down (to the inside lane),’” said Hollidge, who built as much as a half-straightaway edge under green-flag conditions until lapped traffic slowed his pace and gave Eckert an opportunity to steal the race.

Eckert conceded afterward that he wouldn’t have been able to threaten Hollidge if not for the assistance of the slower cars, which in fact fact played the dual role of opening the door for him to briefly take the lead and then putting up a road block to cost him the top spot moments later.

“Lapped traffic helped me, and then it hurt me,” said Eckert, who started from the pole position after setting fast time in his first career visit to Georgetown. “That’s what happens when you’re the leader … it’s always harder on the leader.

“I sat back and seen what (Hollidge) was doing. He was probably a little more aggressive than he needed to be and he got himself loose and I snuck by him, and then we got to the next corner and that (lapped) guy come down and I had no place to go and (Hollidge) went back around me.

“But I just picked too hard a tire,” he added. “Them guys all had a softer tire on. I finally got it going during that one green (laps 14-22), and then we had two cautions in a row (on lap 22) and I was done. I could never get back going after that. If (Hollidge) didn’t get into lapped traffic, I wouldn’t have had a shot.”

The 31-year-old Satterlee, meanwhile, thought he ran a bit too safe of a race.

“I just slowed down too much,” said Satterlee, who made his first start at Georgetown. “Everybody kept saying about how much this place wears tires, and I didn’t really know. We went soft and I made about four or five laps and was going pretty hard (in the lead) and I felt comfortable, but I thought I was maybe pushing it too hard and I just slowed down and Dale just blazed right around me.

“My car was really good … there was a caution there when I was running second and I picked the bottom and I lost second because of that. We were close at the end, but I just kind of made some bad decisions. I was trying to be too conservative. I didn’t want to overwork my tires … and my tires were fine (at the end). They’re perfectly fine, so I could’ve run harder.

“But that’s all right,” he added. “Third’s not bad. We’ve got a little bit of work to do on the (right side of the) body, but we’ll fix that up. I don’t have any idea what I hit if you can believe that … the whole spoiler was ripped off it too. The car had a hard night, but we’ll get it fixed up for Potomac (Friday night’s Colonial Clash event).”

Six caution flags slowed the feature, including two for dusty spins into the grass off turn three by Danny Snyder of Greenlane, Pa. (lap 14) and Donald Lingo Jr. of Millsboro, Del. (lap 22). The most significant accident occurred on lap three when Andrew Mullins of Bethel, Del., slapped the turn-four wall and was towed off.