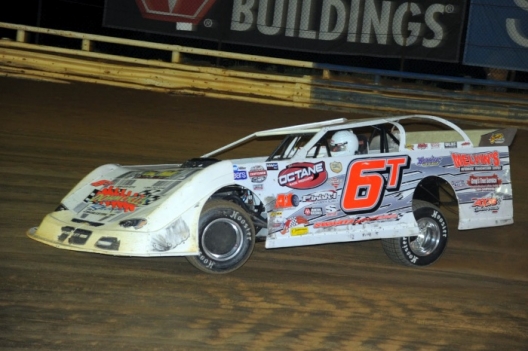 Veteran Tim Dohm of Cross Lanes, W.Va., couldn’t compose himself after winning the Jackpot 100 finale and his first World of Outlaws Craftsman Late Model Series feature. With a home-state crowd cheering him on, the 55-year-old played the role of hometown hero knocking off the traveling stars.

“After (finishing 23rd Saturday) night, I thought we threw it away,” said Dohm, his tears rinsing the dirt from his face. “Man I’m so tickled. … I’m getting emotional. I’m telling you it was tough. Once you get into lapped cars and it’s hard to see. … and everyone is so fast on this racetrack.”

But Dohm was faster than everyone else in the 24-car field. Starting outside the front row, Dohm got the jump on polesitter Frank Heckenast Jr. of Frankfort, Ill., and led all 60 laps.

Although Richards became the series all-time leader in fast-time awards earlier in the night, things didn’t go as well in the feature when he and Overton tangled in turn one on the fifth lap.

Then Ferguson was knocked from contention when he rolled a left-rear tire off the rim after seriously challenging Dohm from the second spot.

Clanton took advantage in his charge to a runner-up finish.

“I was biding my time, waiting and waiting,” Clanton said. “I had my move there. (Our crew) threw the kitchen sink at them tonight.”

Bagley, who started 12th, came forward with Clanton. With 24 laps remaining, the two dueled — Bagley running high and Clanton moving to the low line. While the battle for the runner-up spot labored for 14 laps, Dohm edged away, opening nearly a second-and-a-half lead.

Clanton claimed the second spot for good by wedging his car underneath Bagley in turn one with 10 laps remaining, but he couldn’t catch Dohm while Bagley finished third.

“We took a brand new car out here, and we’ve been just learning stuff,” Bagley said. “We’re just going to learn with it, get a notebook built, and we’re inching forward with it. Hopefully we can build off this. I just got a little loose at the end and Shane got around me.”

In victory lane, Dohm climbed from his car, sat on the door panel for a moment before he addressed the crowd. He took in the atmosphere – between the confetti and fans climbing on the fence just to see a hometown guy get the win.

“I didn’t see the white (flag), I saw the checkered,” he said. “There’s no better place to get my first Outlaws win than at Tyler County Speedway.”