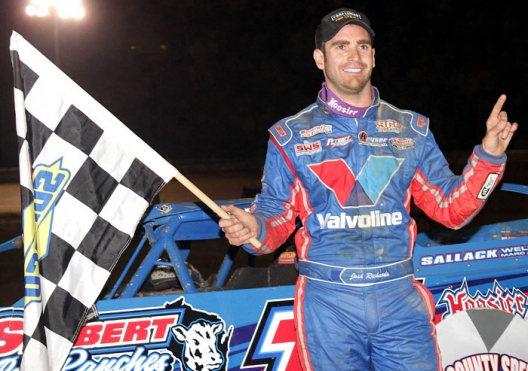 “They’ve done a great job with this race track,” said Richards, who earned $8,000 for his sixth series victory of the season. “You could race all over it. … I’ve never seen that track like this before. But, it was a lot of fun. I want to thank all the fans for coming out, and we’ll see you tomorrow.”

Sunday is when Richards will try to duplicate his 2015 sweep at the bullring and notch his second weekend sweep of the WoO season to match April’s feat at Farmer City (Ill.) Raceway.

Richards was consistent all night, setting fast time and winning the first heat before leading the 24-car field to the green flag. He kept rolling in the main event, too, leading all 40 laps, and opening his lead to nearly a two-second margin by halfway.

He kept a buffer of lapped cars between his car and his closest pursuers, though the eighth-starting Casebolt got a crack at the lead on a lap-22 restart. But Richards denied Casebolt and everyone else in heading for the checkered flag.

“We’re happy to be here, happy to get second,” said Casebolt, who credited his tires for the strong performance. “We’ve been struggling, and we know we’re a better team than what our performances have been. I guess that’s what has kept us going. We just kept trying.”

In the final 17 laps, Richards used the congestion on the track again to open up a 1.671-second lead and took the checkers ahead of Casebolt and Doll, who called the strong run in the national touring event a “dream come true.”

“What’s crazy about it is I shouldn’t be disappointed (with third), but I kind of do,” Doll said. “Maybe making the mistake and taking the bottom on the restart … just wasn’t sure what to do. You have to be ready: Josh takes off on those restarts and I was lagging back a little I guess.”

Clanton, who won the previous night’s event at Ohio’s Moler Raceway Park in his Capital Race Car, was the only non-Rocket driver in the top five.

“I’m just happy to see these [Rocket] guys up front,” Richards said, “as much as I am to be up here winning.”