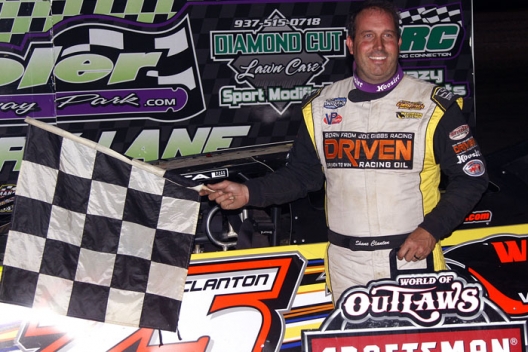 The polesitting Clanton notched his fourth series victory of the season, taking the checkers ahead of a pair of West Virginia-based drivers, points leader Josh Richards of Shinnston and Eddie Carrier Jr. of Salt Rock.

Clanton’s victory gave him 34 on his WoO career, one shy from tying Rick Eckert — the same driver who challenged him most of the night — for third on the all-time series victories list.

Clanton led the pack at the outset with Eckert and Richards giving chase. Eckert quickly challenged Clanton while Richards and Carrier battled a bit further back.

“This is my first time here, and I’ve seen video so I knew whereabouts to be on the racetrack,” said Clanton, who mainly used the bottom groove early in the race on the small oval. “But this track is so wide.”

By lap 16, Clanton began to weave through lapped traffic, choosing the top shelf of the track as his passageway through. A few other drivers later followed suit, including sixth-place finisher Brian Shirley. The lapped traffic created a back-and-forward with Richards and Carrier, who swapped positions twice sifting through the lapped cars.

“I just knew they had to be really good to pass me up top,” Clanton said. “And before that I just kept the bottom line and held my own.”

It wasn’t until 10 laps remaining when virtually all the frontrunners switched to the high groove. Richards worked on tracking down Eckert, who retired late when his car’s rear end gave up.

Three late cautions gave Richards and Carrier a shot at Clanton, but he stayed in command.

“Shane did a great job running a nice, wide arch,” Richards said. “I finally went to the top and got a little momentum, but we just couldn’t maintain it in laps three and four. I think we were a little better than him at the end, but he was doing what he needed to do.”

“Well, it seemed like I was right there with him,” said Carrier, who competed in his first Outlaws race in 2016. “I’m just happy to get a top-three (finish), competing against some of the best competition in the sport.”

Clanton edged a few points closer to Richards in the title chase, but he knows he has his work cut out.

“He’s so consistent right now, and we’re just trying to get to where we were last year and be consistent,” Clanton said. “Wins will come.”

Heckenast ended up fourth in the main event with Devin Moran of Dresden, Ohio, the top home-state finisher in fifth.