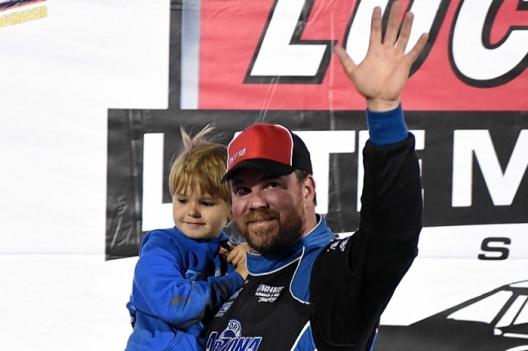 WHEATLAND, Mo. (May 26) — Jonathan Davenport picked right up where he left off last year at Lucas Oil Speedway.

Davenport earned $6,000 for his seventh Lucas Oil Late Model Dirt Series victory of the season and his fourth straight triumph at Lucas Oil Speedway dating to 2015. He swept the Cowboy Classic, the Diamond Nationals and the postponed Show-Me 100 a year ago, leading 169 of a possible 195 laps.

This time he led 44 of 45 laps, taking the lead on lap two in the race named in honor of the late Allen “Cowboy” Chancellor, former co-owner of the Lucas Oil MLRA.

Owens drew close to Davenport midway through the race while the leader worked through lapped cars but couldn’t mount a challenge after a pair of caution flags flew on lap 38. The race’s outside polesitter settled for second place, 1.626 seconds behind the victor.

Sheppard charged forward from the 14th starting spot to threaten Owens in the final circuits before crossing the finish line in third. Ninth-starter Shannon Babb of Moweaqua, Ill., finished fourth after climbing as high as second and 11th-starter Chris Brown of Spring, Texas, placed fifth.

“This is awesome,” Davenport said in victory lane. “We got a really good combination. We had to find something new. We weren’t that good at the beginning in hot laps.”

The eventful race saw polesitter Jared Landers of Batesville, Ark., spin in turn two on the second lap while chasing Davenport, who had overtaken Landers for the top spot moments earlier. Collected in the accident was seventh-starting Tim McCreadie of Watertown, N.Y., who had already advanced to fourth place.

Davenport quickly opened a comfortable lead after the restart with Babb and Owens battling for second.

Owens, the Show-Me 100 in 2011, ’12 and ’13, began to close in and moved within two car lengths by lap 25 as the two were in the midst of lapped traffic. But Davenport was able to reestablish a big lead and was pulling away when a caution on lap 38 — for J.C. Wyman of Griswold, Iowa, who slapped the turn-four wall while running 10th — gave Owens and Sheppard a chance.

The race's third caution waved before a lap could be completed after the restart when R.C. Whitwell of Tucson, Ariz, hit the concrete wall in almost the same spot as Wyman while holding the fifth spot.

Davenport then used a clear track ahead of him to pull away. He said the ride wasn’t easy, especially with rough spots between turns one and two causing him and others turbulence.

“The track was demanding,” Davenport said. “Those last five laps I started driving a little crazy there. I lost my brakes. Anyway, we held on and it was just another great run for us.”

Owens, searching for his first Lucas Oil Series win in 13 months and 43 races, was pleased with his runner-up run.

“We still have a little bit of work to do, but the car is coming together real good,” Owens said. “We’ve had a lot of good runs in the past and things didn’t turn out for us. We were able to bring in a good second-place run.”

Action continues on Friday night with the Tribute to Don and Billie Gibson — the couple who started the Show-Me 100 in 1993 at West Plains Motor Speedway — worth $6,000 to win the 40-lap Late Model feature.

Notes: Five-time Show-Me 100 winner Scott Bloomquist of Mooresburg, Tenn., was scheduled to start fifth but pulled into the infield during the pace laps because his car’s transmission input shaft broke. He returned to the race two laps down after the red flag and finished 19th. … Landers restarted at the rear of the field after his lap-two spin but retired later in the distance after going a lap down. … Chris Simpson of Oxford, Iowa, toughed out a 10th-place finish despite injuring his left thumb midway through the race when his car bounced in a rough spot between turns three and four and he jammed his hand in his car’s steering wheel. He iced his thumb after the race and was hoping it would feel better in the morning. … Bobby Pierce of Oakwood, Ill., hustled from the 22nd starting spot to eighth place before mechanical trouble forced him to retire on lap 29. … Friday's Late Model feature results, combined with the finish of Thursday's main event, will determine the first 16 starters for Saturday's 100-lap Show-Me 100.

With the rain stopped and the track surface run in, the field was sent back on the speedway at 10:50 p.m. CT. The feature is expected to resume within minutes.

While thunderstorms that danced around the area never struck the speedway, a burst of light rain began falling during a caution flag two laps into the 45-lap feature, forcing officials to display a red flag and send the field to the pit area.

Jonathan Davenport leads the way after slipping past polesitter Jared Landers on lap two. Moments after ceding the top spot Landers charged into turns one and two and lost control of his car; he spun in turn two and was hit by fourth-place Tim McCreadie, who had to be towed off the track during the caution period.

As of 10:20 p.m. CT, the track surface has been slickened by the precipitation. But the rain seems to be slowing, raising hopes that the feature will soon resume.

Ryan Gustin slid high in turn two on lap seven to give Chris Simpson a shot to steal the race, but the Gustin held on to beat his fellow Iowan by just over 1 second. Tanner Kellick, an 18-year-old making his first-ever start at Wheatland, outran former Show-Me 100 winner Wendell Wallace to grab the third and final transfer spot.

Justin Kay was victorious in his first-ever heat race at Lucas Oil Speedway, leading all the way. He held off a last-lap threat from Garrett Alberson, who took second from Jason Rauen on lap five. Jason Papich brought out a caution flag on lap four when he slid hard into turns one and two and made contact with second-place Rauen, who went on to finish third; Papich was left sitting in turn two with rear bodywork damage but continued racing.

Jimmy Owens controlled the action, driving away to a straightaway victory over Tony Jackson Jr. Brandon Sheppard kept Don O'Neal behind him to finish third; O'Neal lost fourth to Dennis Erb Jr. on the last lap.

Scott Bloomquist overtook Chris Brown for the lead on lap two and marched on to a convincing triumph. Brown settled for second and Darrell Lanigan finished third after turning back a final-lap challenge from Jesse Stovall. A caution flag flew on lap eight when Payton Looney spun between turns three and four.

Jonathan Davenport had no peer in Heat 2 as he cruised to a near-straightaway victory over Shannon Babb, who wrestled second place from J.C. Wyman.

Jared Landers dominated the action, running away to win by a full straightaway over Tim McCreadie. R.C. Whitwell grabbed the final transfer spot. Group 1 fast-timer Reid Millard was scheduled to start from the pole position but did not make the call for the prelim lineup, while Jeremy Payne and Chris Spieker had troubles and didn't finish the race.

Three-time Show-Me 100 Jimmy Owens of Newport, Tenn., showed his affinity for Lucas Oil Speedway, turning a lap of 15.304 seconds in the second group that was the fastest overall of the 57-car time-trial session.

Reid Millard of Jefferson City, Mo., pulled an upset in the first group, leading the way with his lap of 15.316 seconds.

Both Owens and Millard earned 10-point bonuses toward their combined points totals from the Thursday and Friday preliminary programs.

Bottles of water were a hot commodity in the pit area for the start of the Show-Me 100 weekend with temperatures soaring to near 90 and high humidity creating sultry conditions. Sun has beamed down most of the day, but thunderstorms are dancing around Missouri so officials plan to push the program along in hopes of beating the rain. … A 57-car field signed in for Thursday night’s action, down significantly from the 80 cars that were on hand for last year’s Thursday-night program. Uncertain weather might have kept some teams from making the trip. … NASCAR Camping World Truck Series regular Tyler Reddick of Corning, Calif., is taking advantage of a break in his pavement schedule to return to the Dirt Late Model ranks for the second time this season. On Tuesday the 20-year-old firmed up a ride with the Haughton, La.-based Childress Racing, which fielded a Black Diamond car for Reddick in last month’s Bad Boy 98 at Batesville Motor Speedway in Locust Grove, Ark. Reddick, who has three career Show-Me 100 feature starts (13th in ’13, 25th in ’12 and 16th in ’11), will compete as a teammate to primary Childress Racing driver Garrett Alberson of Las Cruces, N.M. … IMCA Late Model champion Justin Kay of Wheatland, Iowa, is making his first-ever start at Lucas Oil Speedway racing as a Gheer’d Up teammate to Brian Birkhofer of Muscatine, Iowa. … Will Vaught of Crane, Mo., has a family-owned Rocket Chassis mount ready for his first Dirt Late Model appearance of 2016. His racing this season has been restricted to quarter-midget and go-kart competition with his 6-year-old son and 5-year-old daughter. … Iowa native Matt Furman, who has called Portland, Ore., home since last July, will make his second start of 2016 in his new MB Custom machine that his father maintains in the Hawkeye State. Furman is receiving mechanical assistance in the pit area this weekend from Portland, Ore.’s Justin Duty, a 19-year-old West Coast Dirt Late Model racer whom Furman looked up after relocating with his wife. … R.C. Whitwell of Tucson, Ariz., will pull double-duty this weekend, driving both a Dirt Late Model and open-wheel modified fielded by Mike Wedelstadt of Freemont, Wis. Whitwell, who won an MLRA event at Wheatland last year but has never started the Show-Me 100 A-Main, made his first starts in Wedelstadt’s MB Custom mount in last weekend’s Lucas Oil Series events at Oshkosh, Wis., and La Salle, Ill. … A new face to the Lucas Oil Series and the Wheatland pit area is 19-year-old Tanner Kellick of Me-Rouge, La., a Gulf Coast racer who is tackling the biggest event of his four-year Dirt Late Model career.

The 24th annual Show-Me 100 presented by ProtectTheHarvest.com at Lucas Oil Speedway kicks off Thursday night with the Cowboy Classic, a full racing program co-sanctioned by the Lucas Oil Late Model Dirt Series and Lucas Oil Midwest LateModel Racing Association. It’s the fourth straight year for the Thursday event — now a memorial to late series co-owner Allen “Cowboy” Chancellor, who died in April 2014 — but this year a second identical 40-lap, $6,000-to-win card will be contested on Friday with a major change in the Show-Me 100’s format.

Drivers will earn points for the A-Main and B-Main finishes (and qualifying group fast-timers will earn 10 bonus points) in the two preliminary shows. The top 18 in the combined points after the two prelim programs will lock into Saturday night’s $30,000-to-win Show-Me 100 headliner while the remainder will move to three B-Mains on Saturday.

The Thursday and Friday programs will follow the same format as regular Lucas Oil Series events. Drivers will be split into two groups for time trials with the results from the first lining up Heats 1-3 and those from the second aligning Heats 4-6. The top three finishers from each heat will transfer to the feature.

Tonight’s drivers’ meeting is set for 6:30 p.m. CT. Hot laps are scheduled for 7 p.m. with time trials kicking off the competitive portion of the show immediately after.