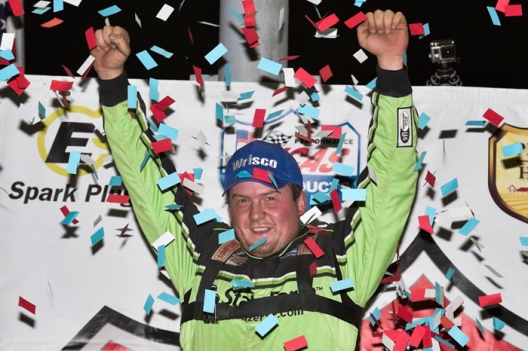 Brandon Sheppard of New Berlin, Ill., broke through for his first victory of 2016 on the national tour, parlaying his recent performance uptick into a flag-to-flag score worth $12,800 in the 60-lap Spring Shootout.

The rising 23-year-old star was the class of the field just one week after losing a potential runner-up finish in the $50,000-to-win Buckeye Nationals at Atomic Speedway in Alma, Ohio, due to an engine meltdown with three laps remaining. He surged off the outside pole to grab the lead at the initial green flag and never looked back, mastering challenging conditions at his home-state track to cross the finish line 3.325 seconds ahead of Watertown, N.Y.’s Tim McCreadie.

“My confidence is probably an 8-and-a-half right now,” said Sheppard, who registered his first win of the season with Eric Brock’s St. Marys, Ohio-based Best Performance Motorsports team in an MLRA-sanctioned event May 5 at Lee County Speedway in Donnellson, Iowa. “We’re really happy with the way everything’s going right now. The car (a Rocket XR1 machine) has been awesome. We’re finally getting this thing dialed in the way I like it. Everybody’s been working hard and it’s finally starting to pay off.

Davenport settled for a fourth-place finish after starting eighth, while Babb’s fifth-place run from the ninth starting spot represented just his second top-five finish in 12 overall starts this season.

Sheppard’s march to his third career Lucas Oil Series win wasn’t as simple as the simple facts would indicate.

“The track’s pretty treacherous out there,” said Sheppard, who snapped a 33-race Lucas Oil winless streak dating back to his last triumph on July 4, 2015, at Portsmouth (Ohio) Raceway Park. “I found a pretty good line that I could be smooth somewhat on. (Turns) three and four was the worst … coming off four the track had a bunch of holes in it and you kind of had to bob and weave to miss them things.

“I’m glad that nobody showed me a nose because I really don’t know what else there was to do. I was pretty much letting it hang out. (Crew chief) Randall (Edwards) was showing me I had a little bit of a lead there. I would ease up a little bit and he would start to show me I didn’t have as much, so I knew I just had to keep my elbows up and keep going as hard as I could.”

The only driver able to draw within striking distance of Sheppard was McCreadie, who started third and wrestled second place from O’Neal for good on a lap-25 restart. The first-time Lucas Oil Series regular pulled within a few car lengths of Sheppard as the leader dealt with heavy lapped traffic with about 15 laps remaining.

“I knew that as long as I kept a guy below me on the bottom that I would be alright,” Sheppard said of his strategy for negotiating slower cars. “But when I was following (Jason) Feger up through there I knew we had guys we were both passing at the same time so nobody was gonna pass me on the bottom. Once we got clear (track) I passed him and then it was alright. It was pretty sketchy, lapped traffic was, but my car was pretty maneuverable.”

McCreadie, 42, saw his hopes of sneaking past Sheppard in traffic essentially snuffed out when the pacesetter managed to clear a batch of lapped cars — including Hall of Famer Scott Bloomquist of Mooresburg, Tenn., Jimmy Owens of Newport, Tenn., and Billy Moyer Jr. of Batesville, Ark. — on lap 47. That move gave Sheppard a buffer that McCreadie couldn’t overcome.

“I didn’t exit (the corners) bad, but it just wasn’t the way I wanted to,” McCreadie said. “My speed was kind of aiming through the center, and I’d have to roll back off the gas to keep from losing the nose on exit. It just killed my straightaway speed a little bit so I couldn’t just hang a left and slide anybody like Brandon did.

“He did a good job. The two guys that he got there in that whole sequence is what won him the race. I doubt that I could’ve even really passed him anyways, but we were up there making it interesting for a little bit.”

McCreadie remained winless on the 2016 tour, but he continued a recent surge that moved him to fifth in the points standings. He recorded his fourth top-five finish in the last five Lucas Oil events.

“We’re happy to have our Sweeteners Plus car near the front,” said McCreadie, who backed up his fourth-place finish in Friday night’s series stop at Oshkosh (Wis.) Speedzone Raceway. “We’ve made some huge strides in the last month so I’m excited to see what we can go for some big-money here in a little bit.”

B-Shepp expressed a similar level of optimism about coming events, including the May 26-28 Show-Me 100 at Lucas Oil Speedway in Wheatland, Mo.

“We got a little bit of momentum built up right here and I just want to hopefully keep it going,” Sheppard said. “We did a little bit of testing after that night at Tri-City (the April 29 Lucas Oil event at the Granite City, Ill., track). We were so bad at Tri-City (he finished 11th), I was really disappointed. We had a little bit of a low there and now we’re back going where we need to be going.”

The 51-year-old O’Neal enjoyed an uplifting outing as well, earning his first top-five finish on the Lucas Oil Series since a fourth at Tri-City.

“This was bringing back a lot of memories (of) Summernationals racing,” O’Neal said, referring to the evening’s hardscrabble action. “That cushion was brutal. I just happened to rub the nose in there about five laps in, and man, I had my hands full the whole race. Finally I broke (the bent right-front nose) free there towards the end where I could race it a little bit.

“Anytime I was off the gas the nose was dragging (for most of the distance), so I was having to make sure I got crooked a little bit in the corner to get around the corner. It’s just like you’re driving the whole race with your right foot just to get around the track.

“We’re making some good calls and seem like we’re getting a little more solid,” added O’Neal, who raced with Black Diamond chassis builder Ronnie Stuckey assisting him while his regular crew chief, Jeremy Justice, was back in North Carolina undergoing additional surgery on his hand that he injured in a shop accident last year. “Hopefully we’ll get a damn win here before long.”

Four cautions flags slowed the event. The first came on the initial start for a homestretch tangle involving Bloomquist, Jared Landers of Batesville, Ark., Darrell Lanigan of Union, Ky., and Ryan Unzicker of El Paso, Ill. Additional cautions flew on lap 18 for Scott Schmitt of Tonica, Ill.; lap 22 for Friday night’s Oshkosh winner A.J. Diemel of Elk Mound, Wis., who was left sitting between turns one and two after he contacted the sideways Brian Shirley of Chatham, Ill.; and lap 25 for debris.

Notes: Sheppard swept the program, preceding his feature win with overall fast-time honors in qualifying and a heat-race victory. … Davenport was unable to break free of his tussle for third with O’Neal and Babb, but his fourth-place finish sent him out of the La Salle pit area leading the Lucas Oil standings by 185 points over Bloomquist. He entered the weekend with his advantage at 80 points. … Bloomquist struggled for the second consecutive night, finishing one lap down in 15th. He had to use a provisional to start the A-Main after failing to take the green flag in his heat race. … Shirley, who swept La Salle’s Thaw Brawl weekend in late March, survived the lap-22 encounter with Diemel to finish seventh. He was battling for fifth on lap 22 when he got into the side of Carpentersville, Ill.’s Dennis Erb Jr., causing him to slide sideways in front of Diemel. … The Lucas Oil tour made its 13th ever visit to La Salle.