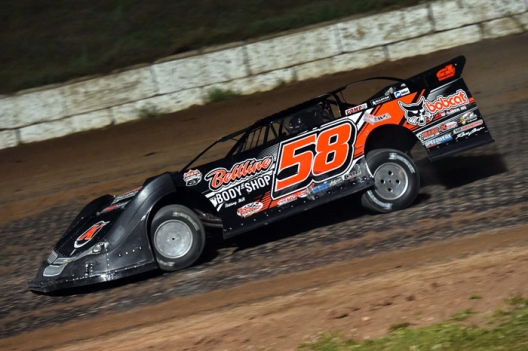 But such an elated reaction was understandable for the 34-year-old driver. Becoming a national touring series victor for the first time — and particularly at a home-state track — is a truly mind-blowing accomplishment.

“It’s awesome,” Diemel said after surging off the outside pole to lead the entire distance. “We probably have 50, 60 (members) of my family up there (in the stands), so it’ll get rowdy down here in a little bit too.”

Diemel admitted that he intended to enjoy his $10,000 triumph so much that he might find it difficult to follow through with his plans to enter Saturday night’s scheduled Lucas Oil Series event at La Salle (Ill.) Speedway.

“I told (La Salle promoter) Tony (Izzo Jr.) in victory lane, ‘We’ll be there (but) I don’t know how hung over we’ll be,’” Diemel said with a smile. “We’ll have a few (drinks) tonight and celebrate this and we’ll get ready to go for tomorrow.”

Diemel had plenty of reasons to savor his performance at Oshkosh, which hosted the Lucas Oil Series for the second consecutive year. He controlled the feature from start-to-finish, outgunning polesitter Tim McCreadie of Watertown, N.Y., for the lead at the initial green flag and holding tight to the top spot throughout the remainder of a race that was slowed by just a single caution flag on lap 34.

Chris Simpson of Oxford, Iowa, was the only driver who even marginally threatened Diemel, drawing within a few car lengths of Diemel’s MB Customs machine midway through the A-Main. But Simpson couldn’t keep pace with the leader following the caution period and settled for a runner-up finish, 1.986 seconds behind Diemel at the checkered flag.

Jared Landers of Batesville, Ark., improved two positions from his fifth starting slot to finish third. He made a late-race bid to overtake Simpson but ultimately backed off on his challenge to preserve a podium finish over McCreadie, who slipped to fourth in the final rundown. Eighth-starter Brandon Sheppard of New Berlin, Ill., placed fifth, rebounding well from the heartbreak of losing a possible second-place finish in the May 14 Buckeye Nationals at Atomic Speedway in Alma, Ohio, to an engine meltdown with just three laps to go.

Lucas Oil Series points leader Jonathan Davenport of Blairsville, Ga., had a quiet night, starting and finishing sixth. He extended his points lead to 130 markers over Scott Bloomquist of Mooresburg, Tenn., who entered the night with three wins in his last four Lucas Oil starts but managed only a 16th-place finish.

A standout in WISSOTA spec-engine competition who has dabbled in full-blown Dirt Late Model racing in recent years, Diemel proved his ability to run with the country’s best talent on familiar turf. He conceded that passing was difficult on the 3/8-mile fairgrounds oval but was in the right position — and fast enough — to take advantage of the conditions.

“It’s a blast to come back here,” said Diemel, who has run well at the speedway in the past. “It kind of sucks for the fans that they had to watch that kind of race, but hell, it’s good to be back here and be in victory lane.

“I caught the traction just right in my qualifying lap (to earn fast-time honors in the second group) … and it really helps when you can start up front and just stay there. It makes it a lot easier.”

Diemel acknowledged that the lap-34 caution flag, which flew after early top-five runner Brian Shirley of Chatham, Ill., slowed with a flat left-rear tire, was the one break that helped propel him to the biggest victory of his career.

“It makes a big difference when we got going (in clean air after the caution),” Diemel said. “We kept getting so much silt and sand being behind those (lapped) guys and my right-front (tire) was getting to be pretty warm. It was good (to have the caution) … it was timed out just right, and once we got rolling there I think we clipped off a few pretty good laps and just kind of maintained when we got behind (slower cars) again.

Simpson, 32, had a differing opinion of the caution flag. He thought he might have a shot at slipping past Diemel if the race had stayed green.

“We were coming,” said Simpson, who drove his Longhorn Race Car by McCreadie for second on lap eight and noticeably closed the gap on Diemel after the halfway mark. “Being second is the place to be on a track like that. (Diemel) kept trying to move up to try and get around them (lapped car) and I could get a run on him.

“I felt like he was struggling coming off of (turn) four pretty bad. I could keep it low and get a run on him (before the caution) … but second place is good. A.J. runs good up here.”

“We’ve been doing a lot of testing, just trying to get stuff dialed in,” Mars said, noting the assistance he receives from Mars, who was a non-qualifier at Oshkosh after experiencing engine trouble. “I think we’re on the right track.”

Diemel’s first-ever five-figure victory also helped him erase memories of his career’s biggest heartbreak: the 2013 World of Outlaws Craftsman Late Model Series-sanctioned USA Nationals. He He led the first 53 laps of the 100-lapper before retiring due to a broken crankshaft.

“We worked really hard to try to get this,” Diemel said. “We had one slip away from us a few years ago at Cedar Lake and everybody remembers that. Now maybe they’ll remember this one.

“I just gotta thank everybody again. It feels really good to have all of our hours (of work) really pay off.”

As Diemel cruised alone out front during the race’s final circuits, the most noticeable aggressor was Landers, who attempted to overtake Simpson for second.

“I got up under Chris there and I didn’t realize I had him lifted,” Landers said of his challenge following the lap-34 restart. “I seen him not going and I had to let out of the fuel there. I thought I was gonna wreck him … I didn’t want to take his spot like that.

“I was wanting to try and get a run and get on the outside of him and catch the brown off of two here wide and kind of scoot through three and four and gain the position … (but) I know if I would’ve stayed up there one lap and let McCreadie by me I would’ve never heard the end of it, so I did the best thing and got back down in line. I think a top-three is a good start back to repair the last couple weeks we’ve had.”

Notes: Diemel’s previous career-richest victory was a $9,200 paycheck he earned for winning the John Seitz Memorial at River Cities Speedway in Grand Forks, N.D. … Diemel has three wins on the 2016 season; his other victories came in weekly racing action at Wisconsin's Cedar Lake and Red Cedar speedways. ... Lucas Oil Series regular Steve Francis was absent from Friday's event because he attended his daughter's high school graduation ceremony. He received 75 hardship points and is expected to be back in action in Saturday's tour stop at La Salle Speeday. ... Scott Bloomquist’s rare quiet night came after he arrived late to the track, missing both hot laps and time trials. He failed to qualify from the rear of a heat race and grabbed the final transfer spot in the first B-Main, then went down a lap to Diemel on the 18th circuit before unlapping himself shortly thereafter en route to a 16th-place finish. … Shannon Babb of Moweaqua, Ill., was the feature’s first retiree, absorbing a 25th-place finish to continue his frustrating early-season results. After 11 starts in 2016 he has just one top-five and three top-10 finishes. … Jason Feger of Bloomington, Ill., started the feature thanks to a track provisional. He advanced from the 25th starting spot to place 15th.