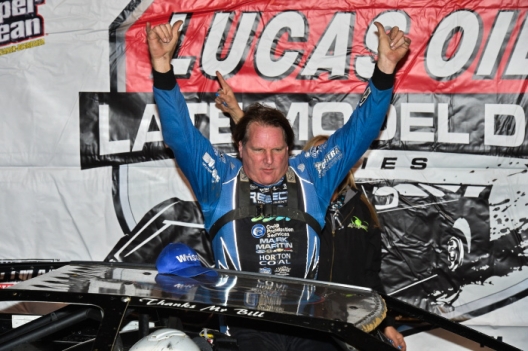 ALMA, Ohio (May 14) — Sliding past race leader Brandon Sheppard of New Berlin, Ill., fifth-starting Scott Bloomquist of Mooresburg, Tenn., regained the lead on lap 48 of 75, leading the remaining distance to capture a $50,000 victory in the inaugural Buckeye Nationals at Atomic Speedway.

Starting on the pole of the 25-car field, Sheppard led the opening lap, slipping in turn two just one circuit later to allow third-starting Chris Madden of Gray Court, S.C., to assume the point. A charging Bloomquist edged ahead of Madden to lead lap eight, but fell to Sheppard on lap 16 as the Best Performance Motorsports pilot shot ahead down the backstretch.

Using restarts to his advantage, Sheppard stretched his lead over the field until entering lapped traffic around the race’s halfway mark. Bloomquist reeled in the Illinois driver, taking the lead for good with just over 25 laps remaining in the distance.

“Even though I got to the lead, they made a couple mistakes,” Bloomquist said after the race. There were some mistakes made that gave me the lead. I was good enough to keep up with them without pushing the car too hard. It looked like they were really pushing things. I just wanted to maintain. I knew the longer the race ran that we would still have tires left. I told everybody, ‘This don’t pay nothing at 50 (laps). You’ve got to be at the end.’

“I was looking for some guys to maybe get us early. And then what happened, we got a good long run and got enough heat in our tires that even the last caution, even though I wasn’t happy to see it, I wasn’t really that concerned about it, because I knew we had heat deep enough in the tires that they’d refire."

Settling into the second-place position, Sheppard slowed on the backstretch to draw the race’s final caution on lap 72, setting up a three-lap shootout to the finish. Bloomquist outran Jonathan Davenport of Blairsville, Ga., to score his fourth Lucas Oil Series victory of the season.

“After a a few choice words in my head, I just went, ‘You’re fine, don’t sweat it. Just focus,’” Bloomquist said of the final yellow flag. “We kind of moved around a little bit, just did different lines. I wasn’t locked into one line for the last few laps, but felt strong enough. You can really gage off of cars you’re lapping. I hadn’t seen either one of them yet, so I wasn’t really looking for them anytime soon."

“I was smiling a little bit,” Davenport said of the race’s final caution. “I’d been running the bottom there, racing with Sheppard, so I really didn’t know how to run the top to make it to my full advantage there, but I was going to give it a whirl there.

“Scott (Bloomquist) was just a little bit better than we were tonight. We were a little bit different on tires. I don’t know if that had something to do with it or not. He’s been pretty good and we’ve just got to go back to work a little bit."

Working his way through the field, Richards was running among the top five when the final yellow flag waved. A former winner at Atomic, the three-time World of Outlaws Craftsman Late Model Series champion said he knew Bloomquist would be tough to beat.

“I knew Scott (Bloomquist) was really good, and this place has so much momentum, I knew it would be tough to make something happen,” Richards said. “But I’m proud of our effort. Our guys worked really hard. I put us in a hole yesterday during the heat race. I think by the end I just wore my stuff out spinning so much trying to get up through there. But we’ll take it."

Notes: The first yellow flag waved on the first lap when Don O’Neal slowed in the bottom of turns one and two with a broken shock. … Colton Flinner drew a caution on lap 21 when he slowed on the backstretch; Devin Gilpin retired under yellow. … A yellow flag flew on lap 31 for debris in turn three; Devin Moran retired under caution. … Fourth-running Jimmy Owens slowed and pitted on lap 49 with mechanical issues. … Second-running Brandon Sheppard drew a caution on lap 72 with engine problems.

Gregg Satterlee of Indiana, Pa., was the winner of the 10 Not In non-qualifiers’ race. He elected to take the $3,000 prize and forgo a starting spot in the feature event. In the post-race interview, Lucas Oil Series announcer James Essex asked Satterlee to share his pick to win the $50,000 Buckeye Nationals. His response: “Scott’s (Bloomquist) been awful good, but I’m going to pick the No. 6 car,” he said. … After struggling in Friday’s preliminaries, Jared Landers of Batesville, Ark., will be one of drivers receiving a Lucas Oil Series provisional to start Saturday’s feature. The other series provisional will go to Tim McCreadie of Watertown, N.Y. … Lucas Oil Series Rookie of the Year candidate Colton Flinner of Allison Park, Pa., will take an emergency provisional to start the main event. ... It was announced before Saturday’s feature that plans for the second annual Buckeye Nationals are already in the works, with the event expanding to three days. Thursday and Friday’s complete shows will pay $5,000-to-win, with Saturday’s main event once again paying $50,000 to the winner. Dates and format are to be determined.

Charging to the front of the field at the drop of the green flag, Mason Zeigler led the entire 15-lap distance. Pulling away after an early battle with Kent Robinson for the second-place spot, Devin Moran began reeling in the race leader in lapped traffic, but it wouldn’t be enough, finishing runner-up at the checkers. Kent Robinson edged ahead of Mike Benedum to finish third at the line.

Polesitter Eric Wells jumped to an early lead, with fellow front row starter Tim McCreadie sliding over the berm exiting turn two to fall back on the opening lap. Jackie Boggs drew a caution on the third lap when he hit the turn-three wall. Losing his second-place spot to Greg Johnson briefly when the race went back green, Gregg Satterlee charged back ahead, only to battle side-by-side with Steve Casebolt for the runner-up position. Wells picked up the consolation win, with Casebolt besting Satterlee at the line to finish second and transfer to the feature.

After temperatures reached near 70 during Friday’s Buckeye Nationals qualifying program, a decided change in the weather has occurred for Saturday’s finale. Overnight rain brought a cold front that has ushered in cloudy, cool and windy conditions; temps are expected to dip into the 40s tonight. … The rain left about half of Atomic’s pit area extremely muddy, prompting several teams — including those of Josh Richards, Mike Marlar, Jake O’Neil and Steve Casebolt — to cover their pit stalls with large tarps so they can work without slogging in the slop. … Kent Robinson of Bloomington, Ind., had to change a fuel pump after his qualifying runs on Friday night. He missed transferring in a heat and starts from the outside pole in the second heat. … All three Conley family members in competition are in the feature, with 74-year-old patriarch Delmas starting ninth and his sons R.J. and Rod taking the green flag from 11th and 16th, respectively. R.J. said he was very excited to see his father move forward to finish second in a Friday heat. “We went home and watched the video on DirtonDirt and I was like, ‘Look at him go!’” R.J. said. … Mike Marlar of Winfield, Tenn., said he struggled getting his car to go through the rough spots in Atomic’s track surface on Friday night, leaving him with a sixth-place starting spot in tonight’s second B-Main. … Drivers who opted to scratch from further action this weekend include Brian Shirley of Chatham, Ill., Freddie Carpenter of Parkersburg, W.Va., and Kenneth Howell of Lovely, Ky.

Saturday’s program will include a pair of consolation races that will set the remaining lineup for the 24-car field. A non-qualifiers’ race will also be a part of the evening’s schedule, with the winner electing to take the $3,000 prize or start at the tail of the feature.