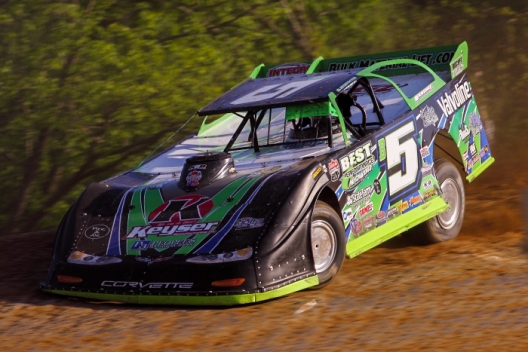 The night’s overall fast qualifier, Sheppard was the winner of the first of six 12-lap heat races while Francis grabbed the triumph in the evening’s fourth preliminary event. Other heat race winners were Chris Madden of Gray Court, S.C., Scott Bloomquist of Mooresburg, Tenn., Jimmy Owens of Newport, Tenn., and Darrell Lanigan of Union, Ky.

Saturday’s program will include a pair of consolation races, with the top two finishers from each race rounding out the remainder of the feature lineup. The inaugural Buckeye Nationals will be 75 laps in distance.

Darrell Lanigan led the first lap, with polesitter Devin Moran edging ahead at the line on the following circuit. In a close battle, Lanigan retook the lead, colliding with Moran in turn four to draw a caution on the fourth lap. Lanigan pulled away to win the sixth heat, with Dennis Erb Jr. advancing from the sixth starting spot to run second. Devin Gilpin held off a charging Moran to transfer to Saturday’s main event.

Polesitter Tim Dohm charged to the lead on the opening lap. Fourth-starting Kent Robinson shot to the second-place spot in the early running, falling to Rod Conley and Jimmy Owens at the halfway mark. Charging around the high side, Owens grabbed the heat race win on the final lap, with Dohm finishing runner-up. Conley took the third and final transfer spot.

Polesitter Steve Francis charged to an early lead, with third-starting Earl Pearson Jr. moving into the second-place spot within the first couple of circuits. Francis held on to win the fourth heat race. Outside polesitter Eddie Carrier Jr. challenged Pearson for the runner-up spot, but came up short. Pearson finished second, with Carrier running third to transfer to Saturday’s feature.

With front row starters R.J. Conley and Don O’Neal in a tight battle for the lead, a yellow flag flew on the second lap when Jared Landers slowed on the frontstretch. Conley jumped to the front of the field as the race returned green, with fourth-starting Scott Bloomquist edging ahead to lead lap four. Bloomquist dominated the remaining distance, with Conley holding on to the runner-up spot. Don O’Neal outdueled Jake O’Neil for the third and final transfer spot.

Polesitter Chris Madden led the opening lap, with Josh Richards, Delmas Conley and Steve Casebolt going three-wide out of turn four. Fourth-starting Conley moved into the runner-up spot, with Richards charging behind in third. Madden pulled away to win the second heat race, with Conley holding off Richards to finish second. Richards ran third to transfer to Saturday’s feature.

With polesitter Brandon Sheppard slipping in turn three, fellow front row starter Jonathan Davenport led the opening lap, with Sheppard charging back to the front of the field on the next circuit. Sheppard led the remaining distance to win the first heat race, with Davenport finishing runner-up. Improving one position, fourth-starting Dale McDowell grabbed the third and final transfer spot.

Brandon Sheppard of New Berlin, Ill., fast qualifier in Group A, clocked the overall quick time for Atomic’s inaugural Buckeye Nationals, tripping the clock with a time of 14.047. Steve Francis of Ashland, Ky., was the fastest qualifier in Group B. Along with Sheppard and Francis, heat race polestars will include Tim Dohm, Devin Moran, Chris Madden and R.J. Conley.

Jared Landers of Batesville, Ark., who was the fast qualifier for the Lucas Oil Series program at Atomic back in March, got into the wall during time trials, never tripping the clock with a time. Among other drivers not completing time trials was Freddie Carpenter of Parkersburg, W.Va., who suffered a flat tire before taking the green flag in his qualifying session.

Chris Madden of Gray Court, S.C., noted that he doesn’t remember much of his last visit to Atomic, which resulted in a 13th-place finish in the 2006 Dirt Track World Championship when the track was known as K-C Raceway. “I just know I was 30 years old (actually 31),” quipped Madden, who decided to make his return to the speedway because there’s is a “real good payoff for this race so we have to support it.” … Shannon Babb of Moweaqua, Ill., who won the 2006 DTWC at Atomic, will look to shake off his early-season misfortune driving his new Rocket XR1 Chassis. He’s only finished one feature in four starts with the car so far in ’16 (a seventh on April 29 at Tri-City Speedway in Granite City, Ill.); his other runs with the machine — all at Farmer City (Ill.) Raceway — ended with a broken right-front shock (Illini 100 opener) and broken engine pistons (Illini 100 finale and last Friday night’s ALMS-MARS show). … An encouraging fourth-place finish in last Friday night’s World of Outlaws Craftsman Late Model Series event at Ponderosa Speedway in Junction City, Ky., prompted Eric Wells of Hazard, Ky., to enter the Buckeye Nationals. “That made it a little easier to come here,” admitted Wells, whose last appearance at Atomic — for last August’s WoO doubleheader — saw him earn a group fast-time honor and respectable seventh-place feature finish. … Three-time UMP open-wheel modified national champion Devin Gilpin of Columbus, Ind., will pull double-duty this weekend, making his first-ever Dirt Late Model start at Atomic in his Jim Beeman-owned MasterSbilt ride while also running his grandfather’s modified. The two cars are both numbered with a 1G and painted almost identically in Gilpin’s familiar yellow-and-red colors. … Dale McDowell of Chickamauga, Ga., is making his first visit to Atomic since a 12th-place finish in the 2011 DTWC. It’s his first trip to the track with Team Dillon Racing. … Mike Benedum of Salem, W.Va., is driving the Eric Hudkins-owned Bloomquist Race Car that Paul Wilmoth Jr. of Clarksburg, W.Va., previously campaigned. … Jake O’Neil of Tucson, Ariz., will take his first laps at Atomic as he continues his more East Coast-based schedule this season. … Scott Bloomquist of Mooresburg, Tenn., was the last hauler to arrive in the Atomic pit area, pulling in shortly before the start of the 6 o’clock drivers’ meeting. He was more punctual than he was for the March 18 Lucas Oil event at Atomic when he missed time trials.

The Lucas Oil Late Model Dirt Series invades Atomic Speedway for the second time this season for the inaugural Buckeye Nationals. The event kicked off Thursday with sport mods and legends, with Super Late Models and modifieds taking center stage on Friday and Saturday.

Friday’s program will include time trials and heat races. With 49 cars on hand, there will be six heats, with the top three finishers from each preliminary tranferring to the feature. Consolations and the 75-lap, $50,000-to-win main event is slated for Saturday.