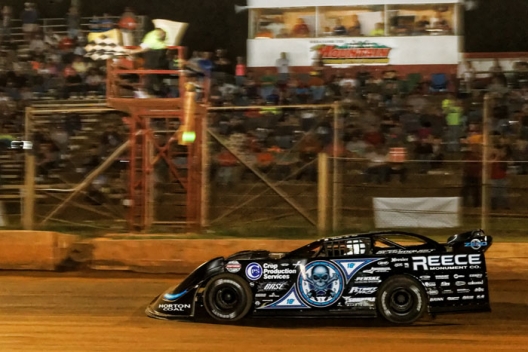 Bloomquist joins Dale McDowell and Willie Milliken as non-series regulars to capture WoO events over the past three race weekends. Of course, Bloomquist is a former series champion and notched his 29th career WoO victory, tying him for sixth on the all-time list.

“We’ve been working pretty hard here,” said Bloomquist, who started third. “We tried a lot of different stuff. Last year we had a good year, but not quite what we really wanted. Fortunately, it forces you to get to work.”

Bloomquist stuck with the inside groove early, taking second from Richards on the ninth lap and then using lapped traffic to overtake Roberts on lap 16. He mostly cruised the rest of the way, leading by as much as four seconds, but had a brief scare when lapping Darrell Lanigan.

“Right there at the end with Darrell Lanigan … he came down pretty hard,” Bloomquist said of the turn-one contact. “We got a little damage on the right side from that but other than that, we had no incidents  We could run anywhere on the race track.”

Madden started sixth but battled Richards most of the way, unable to catch Bloomquist.

“We didn’t get a good start – spun the tires which put us behind,” Madden said. “Me and Josh must’ve ran the whole 50 laps side-by-side. Every time I looked down I saw him.”

The two swapped positions several times throughout the race. With 20 laps to go, Madden nearly wedged his car under a lapped car to create separation, but Richards maintained the fraction-of-a-second distance. He ended up settling for third.

“We had a really great battle,” said Richards, who started outside the front row. “We were able to run up with Chris and Scott, and keep them in our sights. I feel like we had a second-place car. We were at the wrong angle when I thought I had him a couple times.”