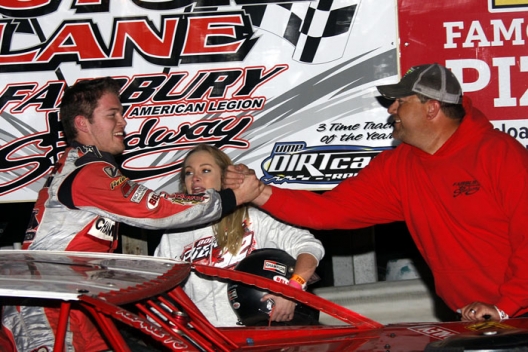 FAIRBURY, Ill. (May 7) — The FALS Frenzy lived up to its name. Bobby Pierce made sure of that.

Executing a dramatic late-race charge through the top five, the 19-year-old sensation from Oakwood, Ill., overtook Earl Pearson Jr. of Jacksonville, Ill., for the lead on lap 46 to clinch a $10,000 victory in Saturday night’s 50-lap feature co-sanctioned by the Sunoco American Late Model Series and MARS DIRTcar Series at Fairbury American Legion Speedway.

Pierce shocked himself, however, with a stirring run that he capped with a pass of Pearson, who started second and had set the pace in Larry Moring’s Black Diamond car since lap nine when he slid by polesitter Jeremy Payne of Springfield, Mo. The teenager beat the 44-year-old Pearson to the finish line by 1.6 seconds.

Dennis Erb Jr. of Carpentersville, Ill., who started fourth, drew close enough to challenge Pearson for the lead with less than 10 laps remaining but settled for a third-place finish. Seventh-starter Brandon Sheppard of New Berlin, Ill., finished fourth after battling amongst the top five throughout the distance and third-starter Billy Moyer of Batesville, Ark., placed fifth after running as high as second and briefly threatening Pearson before the halfway point.

Pierce actually fell completely outside the top 10 at one point early in the race, but he was up to sixth when a red flag — the A-Main’s only slowdown aside from an aborted original start — for a rollover between turns three and four by fifth-running Jason Feger of Bloomington, Ill., stopped the action on lap 25. He used the restart to step up his attack on the quarter-mile oval’s outside groove, where he had struggled to get going during the race’s first half.

“Fairbury’s such a tight racetrack, and when it gets like that it’s so hard to pass,” Pierce said. “You have to have a lot of luck on your side. Tonight the caution (red flag) came our way — we got to start on the outside, and that left (Shannon) Babb (who vaulted from the 16th starting spot to sixth in just five laps and held seventh place at lap 25) on the bottom and he couldn’t really get back up to the top, so that helped me a lot because Babb was really fast up top and B-Shepp (Sheppard) was really fast up top. And you had your guys on the bottom like Erb and Payne and Moyer …

“We kind of had to just go where they weren’t, but it was kind of hard when my car was so fast up top.”

When Pierce “finally got the outside clear,” he was free to maneuver the way he wanted. First he grabbed fourth from Sheppard on lap 37 after the two young drivers traded sliders at opposite ends of the track.

“Brandon was running a great line on the top but he just bobbled that one time and at the same time he did that I had a really good run,” Pierce said. “That let me slide him, and then he slid me back I think … so much stuff happened I couldn’t even remember what happened. But that was kind of the point where I was like, ‘All right, we got a good chance to win this thing.’”

On lap 40 Pierce sailed around the outside of Moyer for third while racing through lapped traffic. Moments later the reigning UMP DIRTcar Summernationals and national weekly series champion found himself in a furious three-car battle for the lead with Pearson and Erb that brought the FALS crowd alive.

Pierce snuck inside of Erb off turn two to snatch second place on lap 43 and almost immediately was on Pearson. A slider through turns one and two just after scoring lap 45 pushed Pierce past Pearson, whose bid to regain command with an inside thrust in turns three and four was futile as Pierce carried too much momentum off the outside and seized control for good as lap 46 went on the board.

“It’s always just great racing,” Pierce said of another typically thrilling special event at Fairbury. “Whenever you can come from the fifth row and win a race, it just says a lot about the racetrack. I’ll be looking forward to the next time we come here.”

Pearson had no answer for Pierce, who charge impressed the veteran.

“Pierce, he come out of nowhere they said and just more or less gave it hell and won the race,” acknowledged Pearson, who made just his second career visit to Fairbury. “I passed Payne kind of middle-to-the-top and just kind of run my line, but then right before that red flag (on lap 25) I seen Billy (Moyer) sneak up under me towards the bottom of the racetrack so I knew I had to kind of start changing my line.

“When we went back green they said I kind of pulled away from them a little bit there …. I was just taking my time, and here comes Pierce. They live around here and race on tracks like this, but I told myself before the green I was not going up on that top and running on that cushion all night. I knew somebody was gonna get up on that top sooner or later … I’m just happy to come home second.”

Erb, 43, continued a promising stretch of action with his third-place finish. It was his third straight top-five run following a third in the April 29 Lucas Oil Late Model Dirt Series event at Tri-City Speedway in Granite City, Ill., and a fourth in Friday night’s ALMS-MARS event at Farmer City (Ill.) Raceway.

“We were able to get up there in second and chase Earl down,” Erb said. “We got in some lapped traffic there and kind of bunched everybody up and Bobby got going up around the top … we made a last dive there to get back under Earl for second and we were real close there at the line (getting nipped by just 0.098 of a second). We had a good car especially on open racetrack. Once we would’ve kept going our car was real good here tonight … just a little short tonight.

“We had a good car last night over at Farmer City but just kind of got blasted out of the way there. We’re making good strides on this thing and we’re plugging away.”

Notes: Pierce, who raced at Fairbury after finishing 23rd in Friday night’s NASCAR Camping World Truck Series event at Kansas Speedway, notched his 15th career ALMS victory and third with MARS… Pierce’s previous win this season was a $10,555 score in the Slocum 50 on April 16 at 34 Raceway in West Burlington, Iowa. … Payne’s rare Fairbury start saw him slip to seventh at the finish after leading laps 1-8. … Mike Mullen of Seymour, Wis., authored a noteworthy performance in just his second open Late Model start, finishing sixth after sitting in the 18th spot near halfway. … Feger wasn’t injured in the accident that left his car lying upside down. … FALS favorite Kevin Weaver of Gibson City, Ill., retired during the mid-race red flag with a smoking powerplant.