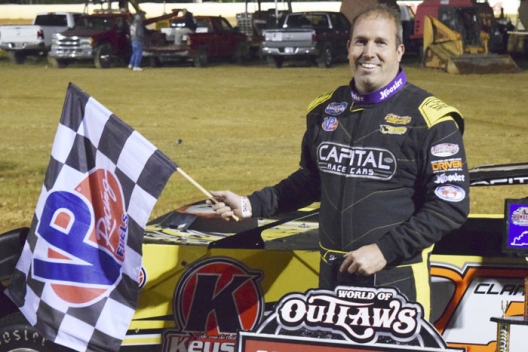 "Well, just catching those lapped cars, I was able to get in better position in the corners,” Clanton said. "I knew if I got up against that berm, I could go down the straight-away and it would be difficult for someone to pass me.

On the first lap, Clanton used the outside groove to wheel his No. 25 Capital machine into the front of the field. He thereon led the remainder of the race. This is the defending points champion's first win since February’s at DIRTcar Nationals at Volusia Speedway Park in Barberville, Fla.

"I think our car had a good balance as choppy as the track was,” Clanton, who entered lapped traffic by lap nine, said. "If you got a good balance, you dont upset your car when you go over the holes. Our car is so balanced right now it could go wherever you want it to go."

Although Clanton led the enntire distance, second-place finisher Chris Madden made a late push in with 15 laps to go, revisiting two out-of-series barn-burners the drivers had on April 23 at Senoia Raceway and Rome Speedway on April 24.

Madden, a regional favorite, challenged the Outlaws, specifically Clanton. But, it may have been the luck of the draw that diminished Madden's chances of catching Clanton in the end.

"We just drew a bad number tonight,” Madden, who drew a number six for the feature event, said. "We had a great racecar, but we just needed to start toward the front.

"Right toward the end we got into lap traffic when we went to make that late-charge. I won two in a row that night in Senoia and went to Rome Speedway and beat him again. Im still up on him."

Madden bested Clanton at Senoia by a .013 margin, but he was only able to close the gap to four-one-hundredths of a second at Ponderosa. With five laps remaining, Clanton doubled the margin, slamming the door on Madden's late-pursuit and the possibility of a non-Outlaw winning a feature for a third-straight weekend.

In an uncanny resemblance, Clanton was doomed by lapped traffic in both prior battles with Madden; this time however, Clanton was able to weave through the field where Madden could not. It took slicing through a three-wide group of lapped cars to widen the gap.

"Madden was closing in on me, but in the middle of lapped cars I did all that I can do," Clanton said. "I just knew I had to meet my marks and get passed those lapped cars as best as I could and let him play havoc trying to get by them. To outrun him and the field feels pretty good.

"Lapped cars cost me my race two weeks ago at Senoia with Madden, and I didnt want to do it tonight. Luckily, we prevailed."

Rounding out the podium was Gregg Satterlee of Indiana, Pa, who started the race on the pole. Satterlee kept to the bottom groove of the track, but said it was the harder tires that caused him to fade quicker than Clanton and Madden.

"I guess we were a little harder on our tires than they were," Satterlee said. "I think they had a softer right-rear tire, and I think that allowed them to get going a little quicker. We went 30 laps and I knew we were right with these guys, and in those last nine laps, it kind of got away."