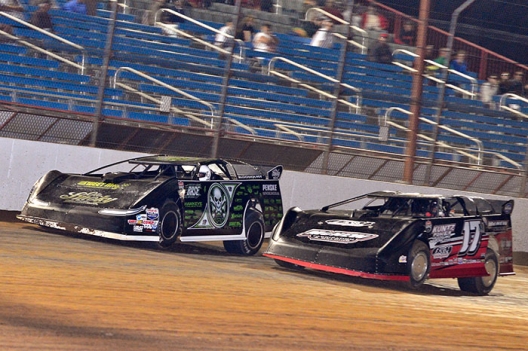 WHEATLAND, Mo. (May 22) — Scott Bloomquist of Mooresburg, Tenn., appeared destined to become the victim of an absolutely monumental upset on Thursday night at Lucas Oil Speedway — and then he went to the top of the racetrack.

Powering around the outside of the 3/8-mile oval, Bloomquist regained the lead from the unheralded Robert Baker of Bryant, Ark., on lap 37 and marched on to capture the 45-lap Midwest LateModel Racing Association-sanctioned Cowboy Classic that kicked off the 22nd annual Show-Me 100 presented by ProtectTheHarvest.com weekend.

Bloomquist, 50, initially passed Baker for the lead on lap 15, but Baker shocked the assemblage by sticking with Bloomquist and moving back in front on lap 34. Then Bloomquist’s high-side response — plus a caution flag on lap 36 — allowed the Dirt Late Model Hall of Famer to snuff out Baker’s underdog bid and claim the $5,045 winner’s share.

“He showed some good poise tonight,” Bloomquist said of Baker, a former open-wheel modified racer in just his third year of Dirt Late Model competition. “He did a good job, and he drove a really good race. It was all had to beat him.”

Baker, who turns 30 on May 28, settled for second place, .0690 of a second behind Bloomquist at the finish. Seventh-starter Chris Simpson of Oxford, Iowa, surged into third place just before the lap-36 caution and finished there, 15th-starter Don O’Neal of Martinsville, Ind., hustled forward to place fourth and Eddie Carrier Jr. of Salt Rock, W.Va., ran steadily throughout the distance to complete the top five.

In a race run in memory of late MLRA co-owner Allen “Cowboy” Chancellor, Bloomquist recorded his second career win at Lucas Oil Speedway with a determined rally. He refused to play along with the fairy-tale story being authored by Baker, who was gunning for by far the biggest victory of his young Dirt Late Model career.

“After he passed us for the lead we had to do something,” said Bloomquist, whose previous win at Wheatland came in a Lucas Oil Late Model Dirt Series event on July 16, 2011. “I just knew I wasn’t as good in the middle as he was on the bottom, and I knew if I tried to pinch my car hard to stay on the very bottom I’d get a little loose. I just decided to roll in higher and carry a little momentum through the center of the corner.

“When we moved up we gained back towards him, and that’s why I knew when we started the race again (after the caution) that we were gonna focus on running up high.”

The triumph gave Bloomquist a big boost heading into remainder of the Show-Me 100 weekend, which includes time trials and heat races on Friday night and consolations ad the $30,000-to-win Lucas Oil Series headliner on Saturday evening.

“Tonight makes for a pretty good test session — and it’s nice taking a little bit of money also,” said Bloomquist, who won the Show-Me 100 a record five times when it was run at West Plains (Mo.) Motor Speedway but counts a second-place finish in 2011 as his best run in the four years the race has been run at Wheatland. “I think I got enough laps under me now to know what’s gonna happen over a long run so I feel like I can make some real fine-tune adjustments now. I feel like I got a real good shot at it (on Saturday).”

Baker’s confidence for the season’s first crown-jewel event also rose thanks to his Thursday-night performance. The 2012 Comp Cams Super Dirt Series Rookie of the Year and a two-time winner on the tour last season, Baker entered the Show-Me 100 tuneup as an unknown commodity to most on hand but emerged as a serious contender after recording the night’s overall fastest qualifying lap, winning a heat race and going toe-to-toe with Bloomquist.

“We were pretty good since we unloaded. Just that late-race restart and experience got me — I was just too low and slow I guess. With some momentum from running higher, I think we could’ve done something.

“We were kind of throwing some marbles up there (to the top of the track) a little bit, and I’m not so sure that we didn’t roll in a few during that caution. It was kind of good up there for a few laps there and (Bloomquist) took advantage of it.

“If I could’ve done it over again maybe it would’ve been different,” he added, “but I’m not so sure that he wouldn’t have done the same thing if he was in front.”

Notes: Bloomquist, who drove a self-designed 2014 car, officially recorded his second career MLRA win. His other score was his 2011 victory at Lucas Oil Speedway that was co-sanctioned by MLRA. … Ryan Gustin of Marshalltown, Iowa, advanced from the 14th starting spot to finish sixth. … Jimmy Owens of Newport, Tenn., climbed from the 11th starting spot to the verge of the top five before fading to 20th in the final rundown. … Every feature finisher’s payout ended with "45" to honor Cowboy Chancellor’s car number when he competed.