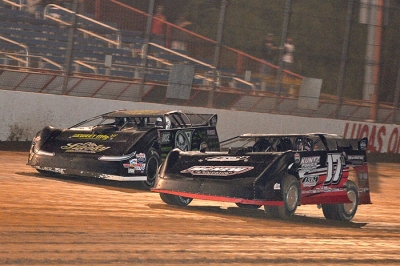 WHEATLAND, Mo. (May 22) — Scott Bloomquist of Mooresburg, Tenn., appeared destined to become the victim of an absolutely monumental upset on Thursday night at Lucas Oil Speedway — and then he went to the top of the racetrack. | Complete Show-Me coverage

Powering around the outside of the 3/8-mile oval, Bloomquist regained the lead from Robert Baker of Bryant, Ark., on lap 37 and marched on to capture the 45-lap Midwest LateModel Racing Association-sanctioned Cowboy Classic that kicked off the 22nd annual Show-Me 100 presented by ProtectTheHarvest.com weekend.

Bloomquist, 50, initially passed the unheralded Baker for the lead on lap 15, but Baker shocked the assemblage by sticking with Bloomquist and moving back in front on lap 34. But Bloomquist’s high-side response — plus a caution flag on lap 36 — allowed the Dirt Late Model Hall of Famer to snuff out Baker’s bid and claim the $5,045 winner's share.

Baker, who turns 30 on May 28, settled for second place, .0690 of a second behind Bloomquist at the finish. Seventh-starter Chris Simpson of Oxford, Iowa, surged into third place just before the lap-36 caution and finished there, 15th-starter Don O’Neal of Martinsville, Ind., placed fourth and Eddie Carrier Jr. of Salt Rock, W.Va., completed the top five.

Robert Baker's dream night continued with the feature redraw, which put him on the pole for the 45-lap headliner. Jesse Stovall will start second, followed by Brian Shirley, Scott Bloomquist, Shannon Babb and Jared Landers.

At 10:30 p.m. CT, the track crew is on the speedway completing a reworking of the surface. The feature will begin lining up momentarily.

A race-long battle for the lead was finally resolved on lap 11 when Will Vaught snuck by Tommy Weder to assume command for good. Vaught pulled away over the final laps to cross the finish line ahead of Weder. Jason Feger fell one spot short with a third-place finish. Bub McCool ran third until slowing on the final lap.

Billy Moyer dominated the action, leading from flag-to-flag to move on to the feature with a victory. New Mexico’s Garrett Alberson finished a distant second to join Moyer Jr. as a transfer in the non-stop event.

Earl Pearson Jr. surged ahead of race-long pacesetter John Blankenship exiting turn two on the final circuit to grab the first last-chance race after the two drivers spent virtually the entire distance battling for the lead. Jeremy Payne ran within striking distance of the leaders throughout but finished third, missing a transfer spot. Among the race’s casualties was Tony Jackson Jr., who retired late in the distance.

The most competitive heat of the evening saw Shannon Babb overtake fellow Illinois driver Dennis Erb Jr. midway through the race to emerge victorious. Jason Hughes advanced from the fifth starting spot to place fifth and Erb settled for third.

Brian Shirley checked out to score an easy triumph, but the battle for second raged throughout the distance. Will Vaught held the spot for the majority of the race but faded in the final laps, losing second to Jack Sullivan and then, on the final lap, third to Rodney Sanders, who started sixth.

Scott Bloomquist controlled the action from start-to-finish, steering his white-trimmed machine to to victory over a close battle for second between Steve Francis and Ryan Gustin. Billy Moyer fell short by one spot, placing fourth in a race that ran non-stop after the original start was called back.

Jared Landers outgunned polesitter Jimmy Owens for the lead at the initial green flag and never looked back en route to victory, but he had an anxious moment on lap six when he nearly ran into Joey Smith, who spun in turn four to bring out a caution flag. Landers was able to avoid Smith and stay a couple car lengths ahead of Owens over the remaining circuits. Chad Simpson came out on top of a close race for third, nipping John Blankenship and Earl Pearson Jr. for the final transfer spot.

Robert Baker continued his coming-out party at Wheatland, checking out from the field to score a dominating victory. He led the race from green-to-checkered, crossing the finish line more than a straightaway ahead of runner-up Eddie Carrier Jr., who slipped underneath Bobby Pierce for second place rounding turns one and two on the final lap. Pierce settled for third in the non-stop race, which saw Brady Smith pull off on lap eight and Terry Phillips scratch from competition.

Robert Baker of Bryant, Ark., kicked off the weekend by pulling off a qualifying upset, registering the overall fastest lap of the session with a clocking of 15.637 seconds in Group A. The 2012 Comp Cams Super Dirt Series Rookie of the Year will celebrate his 30th on May 28.

Scott Bloomquist of Mooresburg, Tenn., meanwhile, was the last scheduled driver to qualify after picking the worst number — 100 — in the time-trial draw, but he ripped off the quickest lap of Group B with a circuit of 15.844 seconds.

The polesitters in the upcoming 10-lap qualifying heat races will be Baker, Jimmy Owens, Jesse Stovall, Bloomquist, Brian Shirley and Sonny Findling, a veteran from Kirksville, Mo., who spent much of Group B atop the speed chart. The top three finishers in each prelim will advance to the 40-lap feature.

The pits are crowded with Late Models on Thursday as Lucas Oil Speedway opens the first of three days of the 22nd annual Lucas Oil Show-Me 100 with a complete program for the Lucas Oil MLRA tour, the cousin of the Lucas Oil Late Model Dirt Series.

Jimmy Owens of Newport, Tenn., who is gunning for his fifth victory in his last six feature races at the 3/8-mile oval, is among the 63 entries signed in for tonight's action. Former Show-Me 100 winners Scott Bloomquist, Billy Moyer, Brian Birkhofer, Terry Phillips and Wendell Wallace — who will make is debut in the Illinois-based Moring Motorsports ride — are also among drivers in the pits.

Tonight’s program will follow the same format as the Show-Me 100 on Friday and Saturday. Drivers will be split into two groups for time trials, with the results from the first lining up Heats 1-3 and those from the second aligning Heats 4-6. All 18 heat-race qualifiers will redraw bottles of Lucas Oil product for feature starting spots — winners picking positions 1-6, second-place finishers 7-12 and third-place finishers 13-18. The feature redraw system will also be used for Saturday night’s Show-Me 100.

Tonight's feature will run over the 45-lap distance in honor of the late Cowboy Chancellor, whose number was 45 when he raced. His final season behind the wheel was in 2013 when he competed in the Late Model division at Lucas Oil Speedway.

Tonight’s drivers’ meeting is set for 6 p.m. CT. Hot laps are scheduled for 6:45 p.m. with time trials kicking off the competitive portion of the show at 7:35 p.m

Tonight’s program marks the second straight year that the Show-Me 100 weekend kicks off with a Thursday-night tuneup sanctioned by the MLRA. This year’s event has been titled the Cowboy Classic in honor of late series co-owner Allen “Cowboy” Chancellor, who died last month. … Jimmy Owens of Newport, Tenn., plans to run his Darrell Lanigan-designed Club 29 car this weekend after winning the last three Show-Me 100s with his Bloomquist Race Car. … Tony Jackson Jr. of Lebanon, Mo., is debuting a new Rocket Chassis car and open-wheel modified ace Rodney Sanders of Happy, Texas, is making his first start in a Club 29 Race Car. … Dennis Erb Jr. of Carpentersville, Ill., unloaded his Bloomquist Chassis machine with a new plain black body. His number and sponsor wrap arrived late in the afternoon and was applied to the car for tonight’s action in the pit area.