Information provided by: Thomas Pope and series reports (last updated May 19, 11:16 am)
In WoO upset, Milliken dominates at Fayetteville 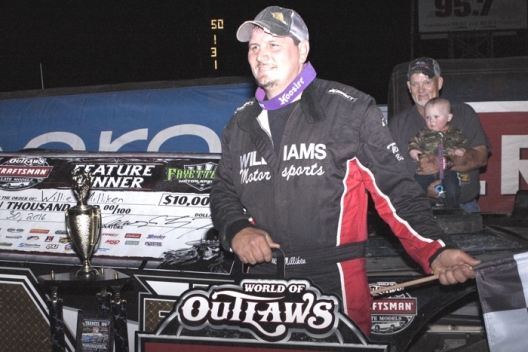 Editor's note: On May 19, WoO offiicals stripped Willie Milliken of the victory because a tire he used failed to meet tire manufacturer benchmarks in multiple tests. Brian Shirley was awarded the victory.

The polesitter Milliken earned $10,600 for his first Super Late Model triumph — in his first start on the national tour — for a major upset of high-profile drivers in front of a standing-room-only crowd at the 4/10-mile oval.

"We have a good piece,” said Milliken, thanking his crew and supporters in victory lane. "We don't get to showcase it all the time. (The key) was just getting on the gas ... the car would take it and it would go.”

Milliken scored a sweep of the night’s events, topping time trials, winning his heat race and leading all the way in the main event after drawing the pole position.

“The draw was real important,” Milliken said. “That’s what helped me the most. I just gave it all I had.”

Brian Shirley of Chatham, Ill., pressured Milliken from the second spot much of the race before finishing 1.184 seconds behind at the checkers. Earl Pearson Jr. of Jacksonville, Fla., whose North Carolina-based Dunn-Benson team hauled back to Fayetteville after a rainout of Saturday night's scheduled Lucas Oil Late Model Dirt Series event at Macon (Ill.) Speedway, was third with WoO points leader Josh Richards of Shinnston, W.Va., and outside front-row starter Billy Moyer Jr. of Batesville, Ark., rounding out the top five.

The 39-year-old Milliken, making just his seventh Super Late Model start after a successful career primarily in modifieds and Limited Late Models, lost a Carolina Clash race earlier this season when Dennis Franklin of Gaffney, S.C., overtook him on the final lap. He made sure his right-rear tire didn’t give up this time like it did that night at Fayetteville.

“We started riding and pacing ourself and saving the tire,” Milliken said. “I was just slowing myself down, trying to keep the tire under me. I wasn’t going to have the same thing happen to me twice.”

Shirley, like most WoO regulars, wasn’t familiar with Milliken’s No. 1, but he stuck with him, ready to pounce on any mistakes by the first-time series entrant.

"I don't know the guy who won, but congratulations to him," Shirley said. "I know how cool it is to win a race this big.”

Shirley took second from Pearson on the ninth lap but never found a way past Milliken.

“I feel like our car was as good as his, but the way the track was, I doubt we would’ve been able to pass,” Shirley said. “It would’ve been interesting to see how lapped traffic would’ve played out if we had had any, but it is what it is. We’ll take it and move on.”

Pearson settled for third after his long trip and planned a drive back to his Jacksonville home shortly after the race. He was impressed with Milliken.

“He did a good job, a real good job. He was good here when we were here” for March’s Carolina Clash event, Pearson said. “He never made a mistake. We never got in lapped traffic so we never got to put pressure on him, but he did a good job.”

Notes: Milliken has nearly 300 career feature victories, most of them in modifieds and Limited Late Models. … Moyer felt fortunate to finish fifth after losing a couple spots when he clipped the inside wall and having a fifth-coil shock break on lap 22. ... Seven cautions slowed the action, the last on lap 44 for Jordan Yaggy's turn-two spin. ... Morgan Bagley pulled up lame with suspension woes on lap 36, then Dustin Mitchell had a flat tire on lap 37. ... Austin Hubbard slowed on lap 27 for a caution flag (another caution came out for Chub Frank on the restart). ... Scott Shirey slowed for a lap-17 yellow. ... Jason Covert slowed for a lap-nine yellow. ... Milliken and Josh Richards were the only two drivers below 17 seconds in time trials. … Drivers failing to make the feature lineup: Joey Coulter, Will Long, Roger Lucas, Brian Ligon and Kevin Wilson. ... Wilson was scheduled to get a track provisional but Scott Shirey received it when Wilson scratched.