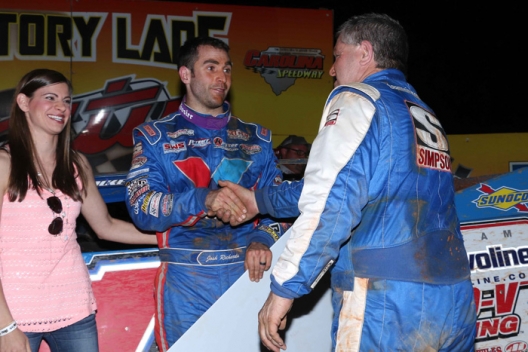 “We were able to survive," said Richards, who took home the $10,000 purse. “We had a great car there. It was starting to get rough off turn four, but I want to thank all the fans for coming out. It's great to come out with a win.”

Chub Frank of Bear Lake, Pa., came from his 12th starting spot for second while ninth-starting Rick Eckert of York, Pa., was third. Frank Heckeanst Jr. of Frankfort, Ill., was fourth for his best series finish of the season and reigning series champion Shane Clanton was fifth at the 4/10-mile oval.

Home-state star Chris Ferguson of Mount Holly, N.C., took the lead from front-row starter Johnny Pursley of Clover, S.C., on the fifth lap, but less than a half lap later his race came to an end when the slowing car of Ricky Weeks gave him nowhere to go in turn three. He retired with heavy right-front damage.

Challenging, high-speed track conditions proved to be a test for the 24 starters in the 50-lapper as 12 caution flags slowed the action in a race where just eight drivers finished on the lead lap. A lap-24 caution was required so drivers could replinish their visor tearoffs as visibility was a challenge all the way.

Richards took advantage of early cautions to make his way toward the front as Ferguson, Josh Langley and Johnny Pursley — who pulled up lame before leading the field back to green on a restart — were among those falling by the wayside.

Richards settled into a favorable groove and took command with Pursley’s departure on the 16th lap.

"That was the biggest thing: trying to find a clean spot,” Richards said. “Once you got up on somebody, you couldn't see anything. It was just a matter of trying to be smooth. You were forced to move around a little bit.”

After Ferguson’s demise, Richards had a strong restart to catapult his Rocket Chassis hosue car into the third position. He then took the second spot when Heckenast drifted up the track and restarted out front after Pursley slowed under caution, then was towed away after losing a wheel.

Frank’s runner-up finishe was his best since a second-place run in August 2015 at Delaware International Speedway as he salvaged the night despite qualifying mid-pack.

"The track was choppy, but you could at least race on it," Frank said of his first trip to Carolina Speedway. "It was definitely a handful. I never knew which way my car was going. I don't think my car was bad, but (Richards) ran through all the rough stuff better than mine. He was more consistent.”

Eckert used the low groove to score his third-place finish, his best series run since a Feb. 13 victory at Screven Motor Speedway in Sylvania, Ga.

Notes: Richards, whose eighth starting spot was by virtue of the worst spot in the redraw, won in his debut at Carolina Speedway. … With vision difficult with mud flying off the track, Richards said he believed he used 30 visor tearoffs after the first 14 laps. … “I hope the fans enjoyed the show,” third-place finisher Rick Eckert cracked in his postrace interview. “There was a lot of cautions … they had a lot of time to drink beer." … The event was the first of two weekend events in North Carolina. Fayetteville Motor Speedway hosts the tour for a $10,000-to-win event on Saturday.