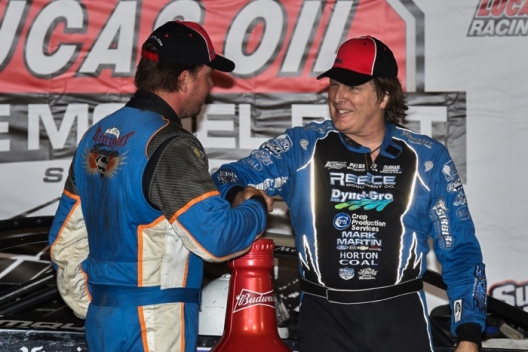 This time the glory went to Scott Bloomquist of Mooresburg, Tenn., who overtook his arch rival — reigning tour champion Jonathan Davenport of Blairsville, Ga. — for the lead on lap 43 and marched on to a $10,000 victory in the caution-free headliner.

But don’t think for a second that the outcome settled anything about who can claim to be the circuit’s dominant force midway through the spring. Davenport, after all, led the majority of the 50-lap feature and felt he was simply downed by a loss of brakes and a deflating left-rear tire, while Bloomquist spoke afterward like a driver who still sees plenty of room for improvement in the weeks and months ahead.

Bloomquist, 52, was undoubtedly looking toward the future after beating Davenport to the finish by 3.374 seconds for his second Lucas Oil Series triumph in his last three starts and his third overall tour checkered flag of the 2016 season.

“We’ve got a lot of little things that I think we can continue to work with,” said Bloomquist, who after capturing Friday night’s A-Main was really just one lap — a last-circuit loss on April 23 at Hagerstown (Md.) Speedway — from enjoying a three-race win streak on the Lucas Oil Series. “I’d like to do a little testing here sometime in the near future and just refine a little bit. I think we’re real fast, but I just think I can clean it up a little bit and make the car a little more fluid.

“You watch the race close and you see we were kind of jumping around and would kick out or we’d shove every now and then … and I can get that fixed I’m sure.”

Dennis Erb Jr. of Carpentersville, Ill., finished a distant third, over 8 seconds behind the tour’s dominant pair after slipping backward from his pole starting spot and swapping third place several times at mid-race with Shannon Babb of Moweaqua, Ill., and ultimately overtaking Don O’Neal of Martinsville, Ind., on the final lap to secure the position. Erb matched his season-best finish on the Lucas Oil Series.

O’Neal advanced from the 12th starting spot to finish fourth and 10th-starter Tim McCreadie of Watertown, N.Y., placed fifth to record his second consecutive top-five run on the tour.

Bloomquist, who started fourth in his Sweet-Bloomquist mount, reached second place behind Davenport with a lap-six pass of Erb. Shortly thereafter, on lap 18, the 31-year-old Davenport lost the lead to Bloomquist amid lapped traffic, but Davenport regained command the following circuit and actually steered his K&L Rumley Longhorn Race Car away to a nearly straightaway edge over Bloomquist midway through the race.

But with Davenport forced to stick to the outside lane around the 3/8-mile oval due to brake trouble and Bloomquist finding speed on the bottom when he got into open track, the action at the front of the pack intensified. Bloomquist was able to run down Davenport and, moments after Davenport scraped the turn-one wall and threw up a shower of sparks, drive underneath Davenport to grab the lead on lap 43.

Bloomquist cruised the remainder of the distance, easily reaching the finish line first for his 65th career win on the Lucas Oil Series. The race ended up being just long enough for him to emerge victorious.

“It might have appeared that we’d get a little loose going in (the turns) but I was having to do that because I was tight,” Bloomquist said. “But once I could get rotated I could really launch off the corner … and anytime we had clear laps (Davenport) would stay high and we were running middle-to-low and I’d see we’d gain on him so we just hoped that we had enough laps there at the end to catch him.”

The score continued a run of success at Tri-City for Bloomquist, who won the track’s spring Lucas Oil Series show for the third straight year. He also has a runner-up finish in Tri-City’s summer 2014 tour event among his last four starts at the Kevin and Tammy Gunmaker-promoted track he can’t help raving about.

“Oh yeah, it’s great,” Bloomquist said of Tri-City. “There’s a hundred ways to drive this place. It’s a lot of fun, and there’s no way anyone’s gonna hold you up. If you’re fast, you’re getting to the front.

“It’s been a good place obviously for us … but I think that we’re gonna have a lot of good places this year.”

Davenport, meanwhile, was unable to overcome the handicaps that hampered his effort.

“Before Scott showed me his nose in traffic the first time (before the halfway point), I didn’t know what it was,” said Davenport, who started from the outside pole and outgunned Erb for the lead at the initial green flag. “I thought we broke a brake line or something, but we ended up breaking a left-rear rotor so all I had was left-front brake. I was having to pump them to have any brake at all.

“It was definitely difficult to drive. I couldn’t run the bottom because I couldn’t get slowed down enough, and I just had to catch lapped cars at the right time. I was trying not to be too aggressive with them because if I’d go in there and the brake pedal went to the floor, I didn’t want to end their night too.”

If Davenport’s machine hadn’t lost braking — and also lose the air in its left-rear tire, which was flat when he reached the scales after the race — he’s confident he could have turned back Bloomquist.

“I think so … we was awful good,” said Davenport, whose points lead shrunk slightly to 100 points over Bloomquist. “He actually got to me in lapped traffic one time and I picked the pace back up and we pulled back off. This thing was just awesome so I think … I don’t know. You can’t never tell, but I think we would’ve had a better shot at it anyway if I’d have had all the brakes on the car … I was married up top because that was the only place I could really get slowed down, hit something to help me drive off the corner.”

Notes: A large crowd filled Tri-City’s grandstand on a night that was threatened by approaching rain, which prompted officials to push the program’s pace. … Babb appeared to be a contender after moving from sixth to third early in the race, but after trading the show position with Erb several times he slipped to seventh in the final rundown. … Jared Landers of Batesville, Ark., and Earl Pearson Jr. of Jacksonville, Fla., used provisionals to start the A-Main after experiencing problems during qualifying. Landers managed to hustle forward from the 23rd starting spot to salvage a 10th-place finish without the benefit of a caution flag while Pearson struggled to a 21st-place result. ... Chris Simpson of Oxford, Iowa, was among the non-qualifiers.