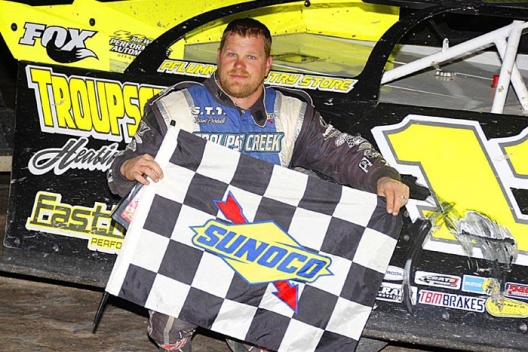 Joe Johnson
John Waters captured the opener on the Go Nuclear Series.
What won the race: Eighth-starting John Waters of Whitesville, N.Y., marched forward to overtake fifth-starting Lee Gill of Lafargeville, N.Y., out front with a slidejob pass off turn four on the 14th lap. Waters would not relinquish point over the remainder of the 30-lap distance and went on to a $1,000 victory in the season-opening Prelude to the Gnome Cup on the Go Nuclear Late Model Challenge Series.
Quotable: “I saw he was married to the top and I could roll the bottom real good,” Waters said of the winning pass. “When I knew I had the opening and I was right on him going in to three, I just let it go all the way up and I was just hoping I would clear him.”
Key notes: Waters led the final 17 laps for his first Go Nuclear win since June 1, 2014, when he triumphed at Humberstone Speedway in Port Colborne, Ontario. ... Polesitter Jason Knowles led the first seven laps; Gill held the point from laps 8-13. ... The 30-lapper was slowed by seven cautions on laps 6, 7, 10, 17, 19, 24 and 28. ... All 22 entrants started the feature. ... The event kicked off Go Nuclear's 13-race campaign. ... The Prelude to the Gnome Cup was apart of the card for Wilbur Duck Chevrolet Night, which also featured big-block modifieds, sportsman and pro stocks. ... The Go Nuclear tour returns to Utica-Rome for the Gnome Cup on May 22.
On the move: The winner started eighth. ... Runner-up Bryce Davis of Hornell, N.Y., started seventh.
Winner's sponsors: The winning No. 11 is sponsored by Andover Oil, Atkins Appraisal, FOX, Insinger, Regeneration and Troupscreek Auto Parts.
Points chase: Sunday's event opened the Go Nuclear season; Gill is the defending series champion.
Car count: 22
Fast qualifier: Bryce Davis
Time: 19.985 seconds
Polesitter: Jason Knowles
Heat race winners: Lee Gill, Bryce Davis, Phil Potts
Next series race: May 22, Utica-Rome Speedway (Vernon, NY) $2,000
Editor's note: Results and race details are unofficial.