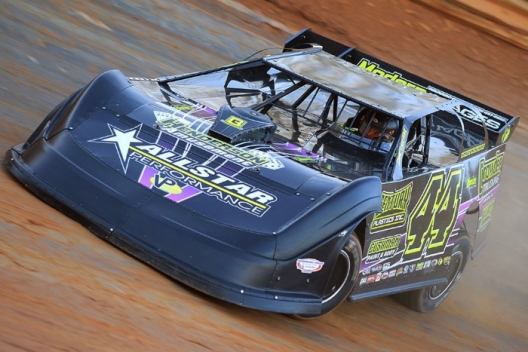 But instead of feeling sorry for himself after his opening-night misfortune, the Gray Court, S.C., driver went back to work Saturday night at the 4/10-mile oval and raced to a $10,000 victory for his second career win on the Ray Cook-promoted tour.

Madden went under race-long leader Dale McDowell of Chickamauga, Ga., on the backstretch on the 24th lap and paced the rest of the caution-free 60-lap feature event.

“We've been good ever since we got here,” Madden said in victory lane, thanking the sponsors of his Clements-powered Longhorn Chassis. “We just got into a mishap last night, leading, and just got in a situation there and got took out by a lapped car and didn't get to win last night. We should have swept the weekend.”

Mike Marlar of Winfield, Tenn., Friday’s $4,000 winner, settled for second on Saturday while McDowell was the third-place finisher. Polesitter Rick Eckert of York, Pa., was fourth and 10th-starting Donald McIntosh of Dawsonville, Ga., rounded out the top five.

“I can't thank Roddy and Aaron and them guys at Penske enough, and Tommy, and just everybody that come out here tonight to support us,” the winner said. “I’ve got a lot of fans that travel around everywhere and follow me. I'd just like to thank all of them that come to support me. This thing was awesome. It's been real good.”

Marlar couldn’t keep up with Madden but was pleased with his weekend performance in his Ronnie Delk-owned Capital Race Car.

“We used all the track up early there, but we got a good finish two nights in a row,” Marlar said. “I got a really, really good team now, and Capital Race Cars, and my wife Stacey, and Josh, and Jerry there to help. A good bunch of people and good results. … We're probably having as much fun as we've ever had racing and by far got the best equipment. I'd like to thank Jack Cornett for real great engines. Jack's here tonight. I like to put on a good performance when he's here.”

He also congratulated Madden for his five-figure payday.

“He had a tough night last night, and sure would like to have beat him, but he definitely deserved to win after that little deal we got into last night,” Marlar said. “Congratulations to him. He had a real good car. He's just a little better than us, but glad to run second.”

While he led 23 laps, McDowell said his car was a little loose getting into the corners as the race wore on, allowing Madden to slip by and pull away.

“The first 20 (laps), when the tire was cool, I was OK. When the tire got a little hot, I got really loose in, so he and Mikey were both better than me,” McDowell said. “We’ll go to work and come back next time and see if we can ... I moved back a notch from last night. Hopefully, I was moving forward a notch, but we had a good starting place, got up front for a little bit. We'll just make small adjustments.”

Notes: Madden scored his fifth victory overall of 2016. ... The event returned to sanctioning by Ray Cook's Old Man’s Garage Spring Nationals for the third time after last year's event was sanctioned by the Carolina Clash.