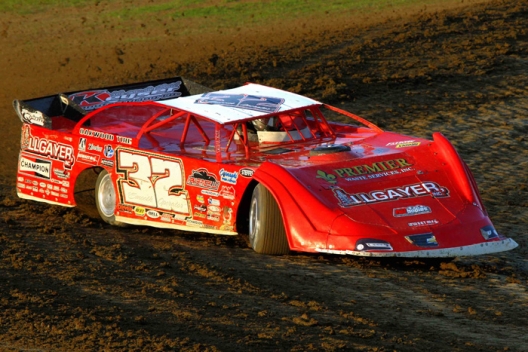 The 19-year-old Oakwood, Ill., driver built leads of as much as a half-track margin at the 3/8-mile oval in grabbing a $10,555 victory, repeating his 2014 triumph in a special event sanctioned by the Corn Belt Clash, MARS DIRTcar Series and Sunoco American Late Model Series.

The fifth-starting Pierce scored his first victory of the season after registering four runner-up finishes, including the previous night at Tri-City Speedway in Granite City, Ill.

“The first one is always the toughest. It's always the most nerve-wracking, too,” Pierce said. “There with a couple laps to go, I hit the cushion really hard. I know something's broke or bent in the rear end, and I could feel it going sideways. Just praying to God nothing would break. We got it, and that's all that matters. We finally got one.”

Pierce took the checkers more than a straightaway ahead of a tight, late-race battle for second among last year’s race winner Ryan Unzicker of El Paso, Ill., Brian Shirley of Chatham, Ill., and Chris Simpson of Mount Vernon, Iowa.

The polesitting Unzicker, who led the first six laps, held on for second while Shirley recovered from a poor mid-race restart to grab third. Simpson was the top finishing home-state driver in fourth while Jason Feger of Bloomington, Ill., rounded out the top five.

Outside front-row starter Jimmy Mars of Menonomie, Wis., ended up sixth after winning the previous night at Davenport (Iowa) Speedway, while third-starting Jesse Stovall of Galena, Mo., ran in the top five until a mid-race spin knocked him from contention and left him 16th in the final rundown.

Pierce lapped all but seven competitors before the final restart as he ran virtually unchallenged after making a few key moves on the high side.

Shortly after the race’s first restart on lap three, Pierce was running fourth but jumped to the high groove to swing around Simpson, Mars and Stovall out of turn four. Pierce took up the pursuit of Unzicker and duplicated the move a few laps later, slinging around Unzicker exiting turn four and setting sail despite the rugged racing conditions.

“The car was really good. The track was very demanding with the holes and everything,” Pierce said. “It was kind of to my liking though because it had some traction strips here and there. You could kind of play around with the racetrack.

“I started doing the diamond line going high and coming down low across the traction strip. I saw my dad. Every time I did that, his sticks got wider (to indicate a growing lead), so I was like, 'Well, I'll just keep doing that.'

“Turn three was just so tricky the whole race. Every time I tried to go patient into the corner, I'd push or I'd jump the cushion and hit the hole. There was kind of no good way around it unless you just went in there balls to the wall really.”

Although he couldn’t duplicate his victory from 2015, Unzicker was pleased with a second-place finish.

“Right now, we're tickled to death, just starting on the pole and finishing second to Pierce,” Unzicker said. “He obviously was the class of the field. … his car was just way better. To finish second, we couldn't ask for anything better there. It's a good payday. It's good morale for the team. We didn't tear nothing up, so we'll go on to next week.”

He was glad to have back-to-back good runs at the southeastern Iowa oval.

“Honestly, before last year, we sucked here. We were terrible. Every time we unloaded, we hardly made the show. … last year, we just unloaded and was good,” Unzicker said. “I think it just brought my confidence level up to run last year and to win it. Coming into this year, we've had a good year. We've only been out two weekends, but two weekends we were out we were good. The car's just real nice and balanced.”

The third-finishing Shirley had his hands full amid Unzicker, Simpson, Feger, Mars and Frank Heckenast Jr. of Frankfort, Ill., late in the race to secure his podium finish.

“It was just a hard battle,” Shirley said. “It was hard to get by people. Out there, nobody's expected to give an inch. It just took a while to get by on these hard tires. It just made it so skatey.”

Besides the caution for Stovall, the race was slowed for two other yellow flags. Dave Eckrich slowed on the third lap and collected Brian Birkhofer, while Gordy Gundaker’s lap-12 flat tire drew another yellow.