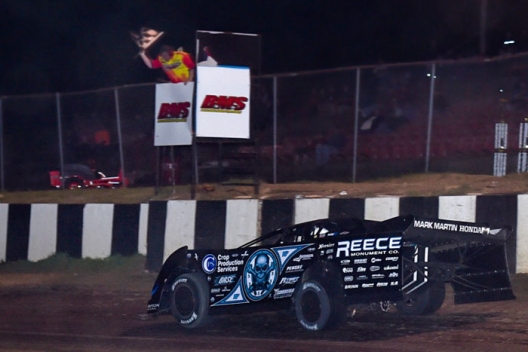 The 52-year-old Hall of Famer from Mooresburg, Tenn., ended a nearly five-year absence from victory lane at the 3/8-mile on Saturday night, roaring to a triumph worth $20,000 in the third running of the Bad Boy 98 co-sanctioned by the Lucas Oil Late Model Dirt Series and the Comp Cams Super Dirt Series.

Bloomquist struck gold at the Razorback State facility for the first time since August 2011, when he captured the most recent of his four career wins in the track’s marquee Topless 100. He was winless in his last six starts at Batesville over the past four years, including finishes of third (2012) and sixth (’13) in the two previous editions of the Bad Boy 98.

Saturday night Bloomquist maintained control of the action for virtually the entire distance, racing off the outside pole to overtake front-row mate Wendell Wallace of Batesville, Ark., for the lead on lap six and never looking back. He repelled a mid-race threat from defending Lucas Oil Series champion Jonathan Davenport of Blairsville, Ga. — who ultimately fell from contention when he slowed with a flat tire while running third on lap 92 — and beat Earl Pearson Jr. of Jacksonville, Fla., to the finish line by 1.457 seconds.

A smooth, steady pace was the key for Bloomquist, who kept his Andy Durham-powered Sweet-Bloomquist car — a machine he debuted on Friday night by setting fast time and winning a heat race — stuck to the bottom of the track and avoided the tire issues that caused plenty of drivers grief during the caution-plagued race.

“We didn’t want to really get too carried away,” said Bloomquist, whose second Lucas Oil Series victory of 2016 came in the national tour’s richest event to date. “You push the issue too much and that’s when you make mistakes.”

Don O’Neal of Martinsville, Ind., quietly moved forward from the 12th starting spot to finish third. Jared Landers of Batesville, Ark., relinquished a top-five spot to pit for a tire change on lap 48 but rallied to finish fourth, and 13th-starter Brandon Sheppard of New Berlin, Ill., also came back for a late-race visit to the pit area on lap 82 to complete the top five.

Davenport, who has never won at Batesville, salvaged an 11th-place finish after pitting with just seven laps remaining. He remained atop the Lucas Oil Series points standings but lost a chunk of the 215-point edge over Bloomquist that he brought into the weekend, heading home leading his arch rival by 130 points (2,0005-1,875) after 14 events.

Bloomquist wasn’t concerning himself with the points standings after the race, but he did acknowledge that drivers need to take advantage other racers’ ill fortune in any battle for the championship.

“We’ve already had some bad luck at Ocala (Florida’s Bubba Raceway Park on Feb. 13) — we dropped out of that leading the show (with a blown tire),” said Bloomquist, whose previous Lucas Oil Series triumph this season came on Feb. 11 at East Bay Raceway Park in Gibsonton, Fla. “It takes some of that (Davenport’s bad luck to catch up), but, all in all, I think our performance is there, and as long as we don’t have any bad luck or drop out of too many races — let’s hope we don’t drop out of any more races — we’ll be good.”

Bloomquist made sure he did everything in his power to keep his car’s tires underneath him.

“We set our own pace once we got the lead,” said Bloomquist, who was hampered slightly by a stumbling carburetor in the bumpy corners but nevertheless kept his challengers at bay following the 12 caution flags that slowed the race. “I just wanted to make sure we didn’t overdo it on the tires. The car was spectacular after the restarts — and there were a lot of them tonight. I had a chance to look at the left rear and it looked good. I haven’t seen the other tires, but I am sure they are OK as well.”

“I just wanted to stay in the low-to-middle (groove) … there were a bunch of crumbs up top. You have got to finish the race, so I went a little conservative at the end. I didn’t know how close they were, but I didn’t hear them.”

Pearson, 44, was unable to make a serious bid to pass Bloomquist after he slid past Davenport for second place following a lap-82 restart, but he wore a big smile after the race. The runner-up finish was by his best of the 2016 Lucas Oil Series campaign — his first top-five run, in fact.

“It’s been a tough year, but all the guys on the Dunn Benson Ford team have done a great job on this car,” said Pearson, whose previous best Lucas Oil outing was a sixth-place finish on April 2 at East Alabama Motor Speedway in Phenix City (his third Lucas Oil start with a new Longhorn Chassis). “We changed several things today just to get our car a little better than last night. Hopefully we can build on this.

“I think we were better at the start than at the end (but) the track cleaned up and made it hard to pass. I was able to get by Davenport (for second) and then the caution came out (for Davenport’s flat tire). I didn’t know with seven laps to go if we had a chance at Scott, but I wasn’t going to give-up.”

The 51-year-old O’Neal also was satisfied with a third-place finish. It was just his third top-five run of the Lucas Oil Series season and first since Georgia-Florida Speedweeks.

“Our team really needed a good run,” O’Neal said of his Clint Bowyer Racing operation. “We have struggled here in the last month or two. We stayed consistent (tonight) and that was what was important. To get a top three is big for the Peak Antifreeze and Motor Oil/CBR Team right now because to run in the top three against these guys, you have done something.

“But we want to win … and if you stay consistent it’s gonna happen sooner rather than later.”

Notes: Bloomquist registered his 64th career win on the Lucas Oil Series, which tops the tour’s all-time victory list. He also joined Jimmy Owens as the only drivers who have won both the Bad Boy 98 and the Topless 100 at Batesville. … The feature’s 12 caution flags stretched from lap 20 through lap 91 and led to the race taking just over 70 minutes to complete. … The only multi-car incident came on lap 29 when Austin Rettig, Colton Flinner, Chris Brown, Hunter Radon and Gavin Landers were involved in a turn-four tangle. … A scrape with another car sent Jimmy Owens spinning in turn four on lap 60. He continued but could only manage a 12th-place finish after running in the top 10 earlier in the race. … Polesitter Wendell Wallace faded from contention after leading laps 1-5, ultimately bringing out a caution flag on lap 54 and finishing 19th. … Dennis Erb Jr., who started 21st, brought out caution flags on laps 51 and 64 but persevered to finish eighth.