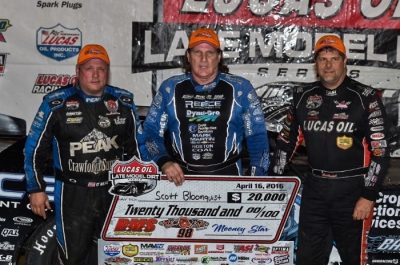 O’Neal, meanwhile, was even more succinct with his first postrace comment. “We needed it,” O’Neal said of his podium finish. “We desperately needed it.”

So it wasn’t difficult to understand their relief in joining winner Scott Bloomquist in victory lane for the traditional photo of the race’s top-three finishers.

Pearson, 44, of Jacksonville, Fla., was extremely thankful for his runner-up outing. His best previous finish in 13 overall Lucas Oil Series starts this season was a modest sixth April 2 at East Alabama Motor Speedway in Phenix City, which was his third tour appearance behind the wheel of the new Longhorn mount his car owners, Carlton and Kemp Lamm of Dunn, N.C., added to the team’s stable last month after exclusively using Black Diamond machines in 2015 and February’s Georgia-Florida Speedweeks activities.

“We’ve been off the pace all year, and we got in this brand-new Longhorn chassis and all them guys at (Bobby) Labonte’s (Longhorn) place do an outstanding job giving us information each and every week,” said Pearson, who registered four top-10 finishes in the campaign’s first 13 Lucas Oil Series events (plus one top-five in two non-Lucas starts). “We love working with them guys.

“This Dunn-Benson team, we’ve been working our butts off, but we’ve been running eighth and 10th. We’re so excited to run second here at this big race. This ain’t been my favorite place, but for all the guys who have worked their butts off on the team and the sponsors and everybody that’s been behind us — because all of us have been down, there ain’t no doubt about it — this right here, we can build on it and go on.”

Pearson was a contender throughout the feature’s caution-plagued distance, moving up from the sixth starting spot to run solidly in the top five before grabbing second place on a lap-82 restart from defending Lucas Oil Series champion Jonathan Davenport of Blairsville, Ga., who would relinquish third place to a cut right-rear tire on lap 91 and ultimately finish 11th.

The fact that Pearson never truly threatened Bloomquist for the lead was immaterial. Simply being in sight of the eventual victor during the race’s late stages was satisfying to the four-time series titlist.

“Later in the race the track got pretty much almost single-file I would call it,” said Pearson, whose best previous finish at Batesville was a third-place run in the 2010 Topless 100. “Down in (turns) one and two, the track’s pretty rough and it would’ve been hard to pass, but Scott, he’s just so good. He just don’t make mistakes, and the only thing we probably could’ve done was got in lapped traffic and maybe done something with him.

“Once we got to second we could stay about 10 car lengths from him, but that’s about all I had.”

For Pearson, what he had was enough to get him headed in the right direction.

“We’re way behind in points so we gotta finish in the top three from here on out to even get back in contention for even a top-three finish in the championship,” Pearson said. “But everybody’s working hard and we’ll go on from here.

“The main thing that Carlton Lamm always told me (is), ‘If we can be competitive, we can win races.’ That’s what we’re gonna try to do from here on out.”

O’Neal, 51, of Martinsville, Ind., authored what was arguably one of the best drives of the long-distance affair. He started 12th and managed to work his way forward to finish third, avoiding the outbreak of flat tires that contributed to the majority of the race’s 12 caution flags.

In fact, Bloomquist, Pearson and O’Neal were in the distinct minority of drivers who ran the entire race without having to make a pit stop for a tire problem.

“The car drove real good where you weren’t hard on the tires,” O’Neal said of his Clint Bowyer Racing Club 29 Race Car. “It just momentumed the racetrack real good … and really, I wasn’t worried about tires at all. I could watch the way Scott was driving too and he wasn’t hard on tires, Earl wasn’t … (the key to the race) was just whoever was easy on the tires and kept the car real straight didn’t have to pit.”

O’Neal left the 3/8-mile oval with a smile on his face — a rare sight for the 2014 Lucas Oil Series champ, who has had some noteworthy moments this season (two January wins in Arizona, a runner-up finish in the Feb. 10 non-points Lucas show at East Bay) but entered the Bad Boy 98 riding a streak of 12 straight starts (five Lucas) without a top-five finish.

“Them guys have been working their tails off, and both teams, working together, is what made this 5 car do what it done tonight,” O’Neal said, hailing his crew and communication with his Bowyer Racing teammate Darrell Lanigan of Union, Ky., who finished seventh. “All in all, what a great night … it’s a confidence booster. I know we haven’t had the finishes to prove how hard they’ve worked, but maybe tonight’s a start on it.”

Pearson and O’Neal swapped the ninth and 10th spots in the Lucas Oil Series points standings after Batesville, with Pearson moving five points ahead of O’Neal. They head to the tour’s next events — April 22-23 at Sharon Speedway in Hartford, Ohio, and Hagerstown (Md.) Speedway — trailing leader Davenport by 415 and 420 points, respectively, but within a more respectable 200 and 205 markers of third-place Jared Landers of Batesville, Ark.

“We’re way behind in points so we gotta finish in the top three from here on out. ... But everybody’s working hard and we’ll go on from here. The main thing that Carlton Lamm always told me (is), ‘If we can be competitive, we can win races.’ That’s what we’re gonna try to do from here on out.”