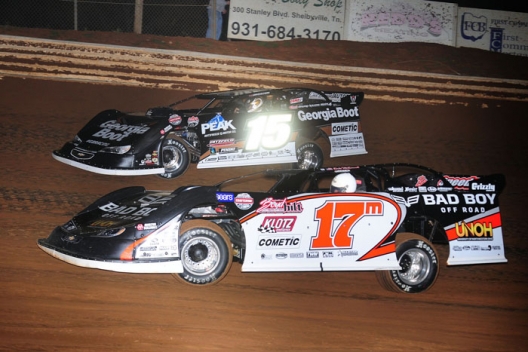 The 49-year-old Chickamauga, Ga., driver has won many major events since then, but none on the national tour since May 20, 2005 when he was last victorious at Brushcreek Motorsports Complex in Peebles, Ohio. While he led every lap of the 50-lap A-Main, he faced plenty of challenges en route to the $10,000 victory at the quarter-mile oval.

"The draw was big for us tonight," said McDowell, who started on the pole in his Team Dillon entry. "It's was awfully racey, especially in lapped traffic.”

McDowell held the inside groove of the track for most of the race, while others — fellow front-row starter and runner-up Darrell Lanigan of Union, Ky. especially — tested him on the high side.

After McDowell built a two-second lead, on lap 29 Lanigan closed the margin. He contested McDowell further with five laps to go, but McDowell was able to maneuver through the slower cars and keep Lanigan's Clint Bowyer Racing machine at bay.

"Yeah, I had to get him hung-up in traffic and get a good groove around that top," said Lanigan, a three-time WoO champion who won the tour's last event contested at Duck River, in 2014. "But the top was so far out there so there really wasn't a whole lot left. He didn't miss his marks on the bottom, so it was going to be really hard to win it.”

Others gambled when choosing their line for the race. WoO points leader Josh Richards stayed low on the track but moved up to the center of the speedway towards the latter part of the race. The ever-changing track conditions coupled with some "missed adjustments" resulted in him rounding out the podium with a third-place finish.

"The bottom early was definitely good, but then it got a black ring around the bottom," said Richards about the bottom race-line becoming slick late in the race. "Dale did a great job. He was definitely the car to beat."

McDowell had another motivation fueling him toward the checkers. After the race, he smiled not for the winless streak he just snapped, but for his mother, who died in 2011.

"My mom has always loved this place," said McDowell, who will celebrate his 50th birthday on May 18. "I'd like to dedicate this win to her.”

Fast qualifier Shane Clanton of Zebulon, Ga., finished fourth while mixing it up with Richards and Brian Shirley of Chatham, Ill., rounded out the top five.

"I got a little bit of body damage being stuck in the middle," said Richards about the battle for third. "It was just racing. Shane was right there on our bumper the whole time.”

Notes: With Saturday’s series event at Tazewell (Tenn.) Speedway cancelled by cold weather, WoO competitiors head to North Carolina the last weekend of the month with events at Gastonia’s Carolina Speedway and Fayetteville Motor Speedway. … Fourteen of 26 starters completed 50 laps. … McDowell's victory was the 10th of his career on the WoO series. A regular on the tour from 2004-06, he won six times in its inaugural season under the World Racing Group banner in 2004 and three times in '05. ... Mike Marlar of Winfield, Tenn., was the top-finishing home-state driver in seventh. … Casey Roberts of Toccoa, Ga., started 17th and finished ninth. … Among drivers failing to make the feature lineup: Ronny Lee Hollingsworth (last week’s regular-season winner at Duck River), Eric Hickerson, Austin Smith, Tony Morris and Tanner English.