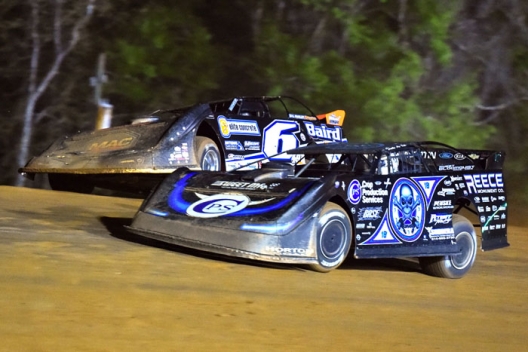 PHENIX CITY, Ala. — It took a while — nearly the entire 60-lap distance — for Jonathan Davenport’s right-rear tire to fire, but everyone knew when it did.

Davenport deftly handled the tricky top groove that knocked two drivers out of contention — Randy Weaver more dramatically than Chris Madden — as he charged past Scott Bloomquist and then Landers to grab his series-leading sixth victory of the season.

In gunning for his second straight series title, the K&L Rumley Enterprises driver increased his points lead to 215 with Bloomquist and Landers vainly trying to keep up so far early in the national tour’s season.

Davenport started fifth, but mostly hung around the top five the first two-thirds of the race while Landers dominated and Madden, Weaver, Darrell Lanigan and Bloomquist took turns in the second spot. But with his harder-compound right-rear tire improving while the competition’s tires began to fade, Davenport was poised to charge forward late in the race at the 3/8-mile high-banked oval.

“I kept trying to count the laps down in my head, and I kept looking at the flagman. Those restarts was killing me,” Davenport said. “Man, once we got rolling, I tried not to blister it going those short runs. Just kept easing into it, easing into it.”

He survived a couple of tense moments on the high-side banking of the track that lacks outside walls, finally grabbed the lead on lap 58 and edged away to win by nearly a second.

Landers settled for second while Bloomquist, who had to switch to a backup car after hot laps, settled for a third-place finish at the track where he’s won eight unsanctioned National 100s. Jimmy Owens of Newport, Tenn., started 16th and slipped over the banking to fall back on the first lap, but he rallied to finish fourth while Lanigan, of Union, Ky., rounded out the top five.

Two contenders weren’t around at the finish. Madden, another former National 100 winner, slipped over the banking in turns one and two on a lap-24 restart to fall back in the field, then decided to call it a night. Shortly after the ensuing restart, Weaver, the Crossville, Tenn., driver who won last year’s Bama Bash, also got over the banking, but  with more disastrous results while he was in the eighth position.

Weaver’s No. 116 Longhorn Chassis flipped violently over the turn-two berm, rolling multiple times until coming to a rest out of the view of the packed grandstands. He climbed out and was able to walk away during the red-flag cleanup, but the car was left in a heap.

After Weaver’s accident, the last of four race stoppages, Landers continued his race-long domination, but he struggled somewhat with lapped traffic in trying to stay ahead of Bloomquist while Davenport haunted them in the third spot.

“I kind of got myself out of the rhythm,” said Landers, who joked that the longer-distance events on the tour for 2016 — paying an extra $2,000 to the winner — didn’t help him. "Yeah, I'm kind of disappointed they added 10 laps to these races on Saturday night.”

Before Davenport caught fire, it appeared Bloomquist might be able to eclipse Landers himself, but he ended up losing a position instead of gaining one.

"We did catch (Landers) but, again, I was pushing extremely hard, and all of a sudden I felt the right rear (tire) started going away on us,” the Mooresburg, Tenn., driver said. “You decide when it's to go and give it all you got, and we did. It was either go for broke right then and maybe be taking chance at winning the race or ... which obviously when Davenport’s right-tire tire came in, it was all over.”

Notes: Davenport dedicated the victory to his father’s 66th birthday, which was Friday. … Nine drivers completed 60 laps. … Cautions appeared on lap five for Joe Armistead Jr., lap 24 for Mason Mason (and then Chris Madden) and for Randy Weaver’s lap-26 wreck. … Brandon Sheppard of New Berlin, Ill., started outside the front row but slipped back to finish seventh. … No Alabama drivers competed in the feature event. … Ivedent Lloyd Jr. of Ocala, Fla., was among drivers failing to make the feature. … The Bama Bash originated at Green Valley Speedway in Glencoe, Ala., and moved to EAMS three years ago.