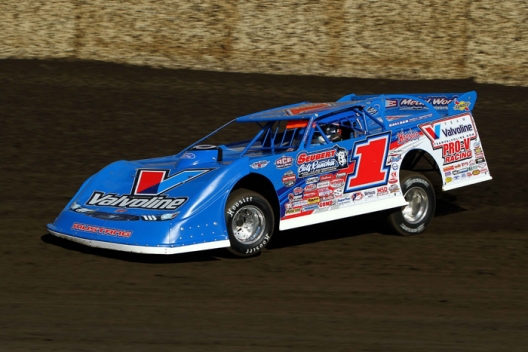 Redrawing to start inside the third row, Richards began his charge around the 25-lapper’s halfway mark, reeling in the front runners as they approached the tail of the field. Slipping past Unzicker just before a yellow flag waved on lap 21, Richards pulled away in the final circuits to score his third series victory of the season.

“On the initial start there, I just kind of rode around,” Richards said after the race. “I felt pretty good, but I knew we had to make something happen if we were going to get up through there. I think (Ryan) Unzicker kind of moved up in lapped traffic there and we got back by him. The car was phenomenal, really fun to drive. It feels good to race since Florida and to get a win here at Farmer City means a lot to me personally.”

“I knew I was kind of riding early,” Richards said. “I wanted to see how the car was and everything. We just picked up the pace a little bit and it was there. It was really fun to drive. Seventy-five laps is a long time tomorrow. This little place, anything can happen. You slip up a little bit, you can lose a bunch of ground or gain a bunch of ground. But the car’s been really great."

Unzicker held on to finish second, with Billy Moyer Jr. of Batesville, Ark., holding on to his third-place starting spot. After swapping the lead in the opening laps, Overton fell back to run fourth, with seventh-starting Steve Casebolt of Richmond, Ind., rounding out the top five.

“You never want to see the yellow, but my stick guy told me that my lead was shrinking,” Unzicker said of the lap-21 caution. “That’s why I took the outside line there, just to try something different. I was kind of bottled up there on the bottom with I don’t know how many to go. I had to give it a whirl. I didn’t see nobody out there, so I was like, ‘What the heck, I’ll do it.’ But to lose to Josh (Richards) … he’s on top of everybody right now. We can’t hang our head about that.”

Coming off a solid showing in last weekend’s Thaw Brawl at La Salle (Ill.) Speedway, Unzicker posted his best career performance with the World of Outlaws tour. His early battle with Overton was fun for both the fans and the driver.

“That was awesome,” Unzicker said. “That’s what the fans paid their money for. And it makes us racers excited about getting in the car, because it gets kind of old sometimes. That was awesome … for us to be able to race back-and-forth and even be able to challenge for the lead at this place with as many good cars, we’re just tickled to death.”

Moyer Jr. was pleased with his podium finish. Notching a fourth-place finish at the Illinois oval during July’s UMP DIRTcar Summernationals action, the second-generation driver now counts Farmer City among his favorite racetracks.

“It was so much fun,” Moyer Jr. said of the race. “I want to win, but dang, that was a lot of fun. My dad, over the years, always talked about this place. I always sucked qualifying, so I got put in the back, so I didn’t make the race or I ran in the back and got in the way and got lapped. I’ve been up front twice in a row here, Summernationals … this is a hell of track. It’s one of my favorites now.

Notes: The first 10 laps saw nine lead changes between front row starters Brandon Overton and Ryan Unzicker. … The race was slowed by two cautions. … A yellow flag flew on the initial start for a tangle in turns one and two involving polesitter Brandon Overton and several others. The race was brought to a complete restart; Overton continued with heavy body damage to the right rear of his car. … Running among the top five, Bobby Pierce drew a lap-21 caution when he jumped the cushion in turn one.