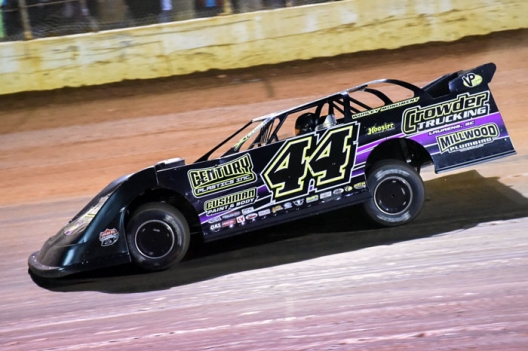 RINGGOLD, Ga. — As with most dirt racers, Chris Madden allowed that his team has “had some ups and downs” over the last year or so. No more so than Friday for the Gray Court, S.C., driver.

A trailer fire nearly halted the team’s day before it began at Boyd’s Speedway, but Madden was on top at the end of the night, leading all 50 laps for a $10,000 Lucas Oil Late Model Dirt Series at the track on the Tennessee-Georgia border.

The 40-year-old Madden dominated for his fourth victory in his last six starts overall in a Longhorn Chassis that he called “one helluva race car,” grabbing his eighth career victory on the national touring circuit.

“Today didn’t start off real well for us. We started off with our trailer caught on fire coming down here, so we’ve been just partially powered tonight, and this (victory) couldn’t have come at a better time,” said Madden, whose last Lucas Oil triumph also came in Georgia at Dixie Speedway in 2014.

Madden, who took a break from racing midway through the 2015 season, has been firing on all cylinders since returning late last summer, with the Boyd’s victory continuing a solid start to the 2016 season.

“It’s really been tremendous ever since we got back to racing, the whole time,” Madden said. “We’ve had some ups and downs, but we’ve had a lot more ups than we’ve had downs.”

Starting outside the front row and getting the jump on polesitter Scott Bloomquist, Madden ran virtually unchallenged at Boyd’s taking the checkers comfortably ahead of a tight battle between runner-up Randy Weaver of Crossville, Tenn., and Jared Landers of Batesville, Ark. Reigning series champ and points leader Jonathan Davenport of Blairsville, Ga., was fourth while Bloomquist, of Mooresburg, Tenn., rounded out the top five finishers in a race before a packed house with a single caution.

Rain late in the week threatened the action at the track co-owned by former series regular Dale McDowell of Chickamauga, Ga. — who finished sixth — but conditions were perfect for Madden’s stellar performance.

“We were good from the time we got here,” Madden said. “Dale and them do a super job on this place, and they’ve got it real racy. And I knew Randy would be pretty strong. He’s always tough around this place. But we just got it done tonight.

“When they watered the track, that didn’t do nothing but help it. It made it racy for sure. I’m sure racing behind us was probably pretty good … it had two grooves out there and our car just happened to be good enough tonight to run anywhere we wanted to.”

Weaver and Landers were left to battle for second on the 3/8-mile oval, and Landers nearly stole the spot in the final laps.

“Yeah, I thought, 'Man, here I’ve goofed around this whole race, and Jared’s going to get by me.' But it was good racing. He should’ve got me,” Weaver said. “I was so bad down these straightaways. We put out big motor in because of all the rain, but then the track (surface) kind of one what it normally does, so I was fighting that traction down the straightaways. I figured I was holding him up.

“But man, it was a good night for racing. I thought we wouldn’t even get to race. Hats off to Dale and all them guys for getting everything ready.

“I’ve said it before, it’s fun to drive a race car, but if we was out here by ourselves and there wasn’t nobody to watch us, it wouldn’t be half as fun. Really hats off to everybody coming out and taking a chance and watching hopefully a good show.”

Landers, who tuned up at Boyd’s two weeks earlier, had to settle for third.

“I kind of hugged the bottom too much and got a little bit of a push,” Landers said of his late battle with Weaver. “I tried to give him room. I thought I would’ve had him cleared, but obviously I didn’t.

“But we still had a good car. … The last couple of laps when I started moving around, I found a better line. I (wish) I’d have found it sooner. I don’t know if I had anything for Chris, but I found something on the racetrack, and obviously it got me up beside Weaver here. Congratulations to Chris, he had a heckuva race, and Dale and Boyd’s Speedway, they done a heckuva a job where it was racy. Because I like racing these slick racetracks. Normally I’m a gasser, but I kind of like maintaining, trying to keep tires under me.”