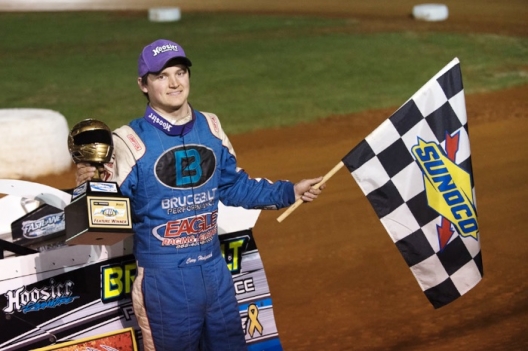 Bruce Carroll
Cory Hedgecock notched his first victory on the Chevy Series.
What won the race: Inheriting the lead after Ryan King of Seymour, Tenn., crashed on lap 44, Cory Hedgecock of Loudon, Tenn., led the rest of Saturday's 50-lapper at 411 Motor Speedway to capture the Chevrolet Performance Series opener and a $3,000 payday. Hedgecock earned his first series victory while King led 43 laps but tangled with a slower Ross White, sliding into the infield and damaging his car against an infield tire barrier.
Quotable: “I knew from the drop of the green flag that I was racing for second, because Ryan had us covered tonight,” Hedgecock said. “He made a better tire choice than we did, and when he was in a clean track condition, we was gone and we had nothing for him. I hated he got taken out like he did in lapped traffic. We were gaining on him and I was looking forward to an opportunity to race him at the end.”
Key notes: Hedgecock took the checkers 1.585 seconds ahead of Tyler Crowder. ... Ryan King, who led 43 laps, said he found himself "in the wrong place at the wrong time, but that’s just a part of racing." The crash damaged one of the last Stinger Race Cars built at J.T. Kerr Racing Equipment. ... Four cautions slowed the action, including for Austin Smith's lap-21 spin. ... Eleven of 19 starters completed 50 laps.
On the move: Jadon Frame of Winchester, Tenn., started 19th and finished ninth.
Winner's sponsors: Hedgecock's Rocket Chassis is sponsored by SmithBuilt Homes, Brucebilt Performance, K&P Used Cars, Eagle Racing Engines, Rebel Diesel, Timeless Memories Photography, Renegade Fuel and ET Motorgear.
Points chase: The event opened the series season.
Car count: 20
Fast qualifier: Cory Hedgecock
Time: 14.525 seconds
Polesitter: Cory Hedgecock
Next series race: April 22, Magnolia Motor Speedway (Columbus, MS) $2,000
Editor's note: Results and race details are unofficial.