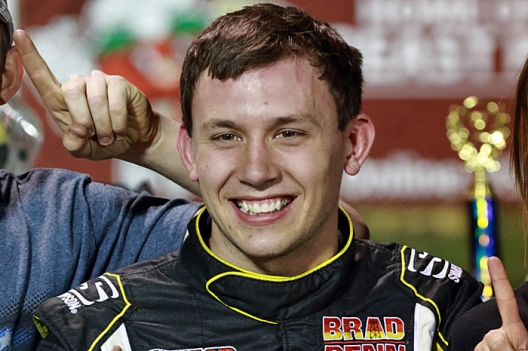 Roy D. Walker/rdwphotos.smugmug.com
Devin Moran smiles amid the No. 1 signs in victory lane at Florence.
What won the race: Overtaking second-starting Darrell Lanigan of Union, Ky., on lap 14 of 50, polesitter Devin Moran of Dresden, Ohio, led the remaining circuits, holding off a charging Lanigan in the final laps to capture a $5,000 victory at Florence Speedway.
Quotable: "I knew I was really good on the restarts and I could get right on (Darrell) Lanigan's back bumper," Moran said. "I just drove down into one and two and it stuck, so I just kept on going. I got in front of him and he crossed me over and I just drove it down in three and four so he couldn't slide me back and it stuck again. We just really never looked back from there."
Key notes: In just his second trip to the northern Kentucky oval, Moran scored his first career Florence victory and the first win of his 2016 campaign. ... Scott James drew the first caution on lap five when he slowed on the backstretch. … A yellow flag waved on lap six when a collision with Duane Chamberlain sent Dustin Linville spinning down the backstretch. … Kent Robinson spun on the backstretch to draw a caution on lap 13. … A yellow flag flew on lap 21 when James slowed on the racetrack. … Steve Casebolt drew a caution on lap 23 when he slowed in turn four with a left-front flat. … A yellow flag waved on lap 27 when Greg Johnson slowed on the track following a collision with Steve Francis. ... Making his first start in more than a year, Best Performance Motorsports driver Jeff Babcock finished sixth.
On the move: An early caution sending him to the tail of the field, Dustin Linville of Bryantsville, Ky., rallied to finish fourth.
Winner's sponsors: Moran's Barry Wright Race Car is sponsored by Accu-Force Shock Dyno, All About Wraps, DMR Driving School, Dow Cameron Oil & Gas and Tommy Pope Construction.
Points chase: Robby Hensley of Walton, Ky., is the reigning Super Late Model track champion at Florence. He was not on hand for Saturday's event.
Car count: 34
Fast qualifier: Steve Francis
Time: 17.685 seconds
Polesitter: Devin Moran
Heat race winners: Devin Moran, Darrell Lanigan, Devin Gilpin, James Rice
Consolation race winners: Scott James
Editor's note: Results and race details are unofficial.