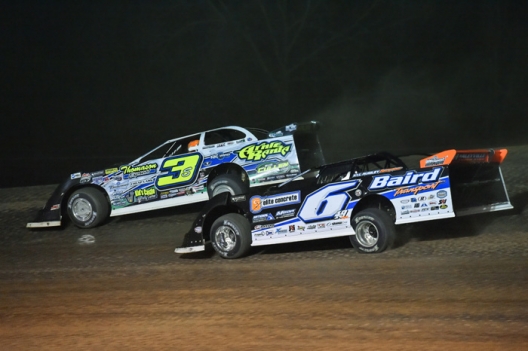 ALMA, Ohio (March 18) —Picking up where he left off just one year ago, fourth-starting Jonathan Davenport of Blairsville, Ga., edged ahead of polesitter Brian Shirley of Chatham, Ill., on lap 18 of 50, leading the remaining distance to capture his second straight Buckeye Spring 50 victory at Atomic Speedway.

Starting outside the second row, Davenport shot to the second-place spot on the opening lap, challenging Shirley for the lead in the early running. After a side-by-side battle with the former UMP Summernationals champion, Davenport pulled ahead just shy of the halfway mark to score a $10,000 Lucas Oil Late Model Dirt Series triumph.

“Those first five or 10 laps there, that was awesome,” Davenport said in victory lane. “If that doesn’t get your heart pumping, you need to check it, because me and (Shirley) had an awesome race sliding one another, and then we was racing side-by-side.

“I knew (Shirley was on a little bit different tire combination than we was, so I knew he was going to get out there and be fast early. I thought we’d be better later on, but you just can never tell. I found a couple of rubber strips here and there, and I think that’s what helped us get by him."

“It was getting dicey up there,” Davenport said of lapped traffic. “Me and (Shirley) was running side-by-side for a long time behind them running side-by-side. I would try to clear one car and pin him behind another car where he couldn’t get a run back on me. It was just a big chess game out there and we come out the winner."

Shirley held on to finish second, with Jimmy Owens of Newport, Tenn., holding on to his third-place starting spot. Outside polesitter Mike Marlar of Winfield, Tenn., ran fourth, with Darrell Lanigan of Union, Ky., rounding out the top five.

“J.D.’s good,” Shirley said of the early-race sliders. “He went in there and cleared me, but he’s good about accepting it back. It went back-and-forth there for a little while. It was no problem at all with me.

“We did a little different on tires. (Davenport) and (Owens) were a little harder than us. I don’t know if that was the outcome or not. These are two of the best and we’re just learning.”

“It’s good to be back up front,” Owens said after the race. “We’ve got a good team, we’ve just got to learn how we all like whatever we like. R&W Motorsports, they came through real fast for us. Pretty much, two weeks before (Golden Isles), we didn’t have nothing and everybody just come together. We’re still behind. It’s so hard to get caught up through the season when you get behind the 8-ball that far. But we’re coming around.”

Notes: Davenport will end March with five Lucas Oil victories, the most by any driver at that point in the season over the tour's history. ... The 50-lap main event ran caution-free. ... Josh Richards of Shinnston, W.Va., who finisheed runner-up in last year's Buckeye Spring 50, started on the front row of the first heat race, but retired on the first lap with mechanical issues, scratching from the remainder of the program. ... Arriving to the track late, Scott Bloomquist of Mooresburg, Tenn., missed time trials and started from the tail of his heat race, but was still able to earn one of the three transfer spots. ... Shannon Thornsberry of Martin, Ky., hit the turn three wall during the second consolation, heavily damaging his No. 17 machine; he climbed from the car apparently uninjured.