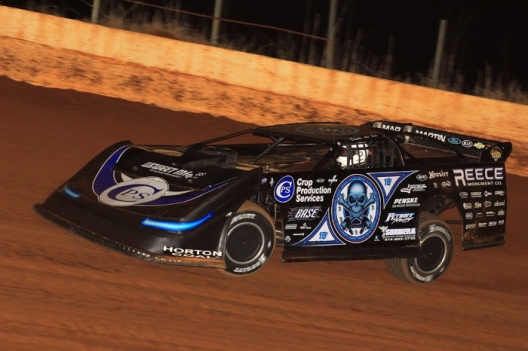 Starting on the pole, Weaver charged to the lead at the drop of the green flag, approaching the tail of the field by the ninth lap. The pair battled side-by-side through lapped traffic, with Bloomquist nosing ahead at the line just shy of the halfway point.

“Everybody’s always working hard, and we’ve been working pretty hard ourselves,” Bloomquist said in victory lane. “We were pretty good. I was a little bit free early and we moved up and the car felt really good a little bit higher. We just got a good move in traffic. I had a little bit of disrespect, I think, out there on the racetrack, but that’s the way it goes.”

Saturday’s win marked Blomquist’s first career Spring Nationals victory and the third of his 2016 campaign. Never letting Weaver get too far out of his sight, the Hall of Famer was able to methodically reel in the Smoky Mountain standout.

“I felt like we could get away from him if we got out and got some clean air,” Bloomquist said. “When you get into traffic, they get your air a little messed up and it’s easy to get a little bit free. The car was really good by itself. I felt like we had the car to beat.”

"Anytime you can race with Scott (Bloomquist) and them guys … it’s a testament to our race team,” Weaver said after the race. "We knew clean air was important. We got out there and then when you get in lapped traffic, you gotta try to maneuver. I just got in there and lost air and he got by me down there in one and two. And then the next time, he kind of got in the dirty air and I got beside him. We go down the back shoot and we’re wheel-to-wheel, and then all of a sudden, here he comes. I could barely see the Greg Johnson car, so he kind of got us pinched up there. But that’s just hard racing."

After facing tough luck throughout Georgia-Florida Speedweeks, Marlar clicked off his first podium finish of the season. He challenged the front runners in the early running before settling for a third-place finish.

“As long as we were racing there, it was good,” Marlar said. “We got to beating and banging down here and that just killed my whole race. But we had a really, really good car right there. We were just a little slow getting going, but after it came on, it was real good there toward the end. By that time, there wasn’t much track left.

Notes: The race was slowed by three cautions. ... The first yellow flag waved on lap 38. … Tommy Kerr slowed in turn four to draw a caution on lap 58. … A yellow flag flew on lap 59 when Robby Moses slowed on the frontstretch.

Scott Bloomquist of Mooresburg, Tenn., set the overall fast time for the third annual Tennessee Tipoff, tripping the clock with a time of 14.901. The Hall of Famer fell just short of the track record of 14.860. He'll start on the pole of the third heat race. Randy Weaver of Crossville, Tenn., was the fast qualifier in his respective time trial group and will start on the pole of the first heat race.

The Old Man’s Garage Spring Nationals Series will open its 2016 season with the third annual Tennessee Tipoff at Smoky Mountain Speedway in Maryville, Tenn. The race is paying $15,000-to-win, the richest winner’s purse in track history.

Casey Roberts of Toccoa, Ga., was the winner of last year’s event, but is not among this weekend's entrants. Other past recent winners on hand for the weekend are Dale McDowell of Chickamauga, Ga., and Chris Madden of Gray Court, S.C.