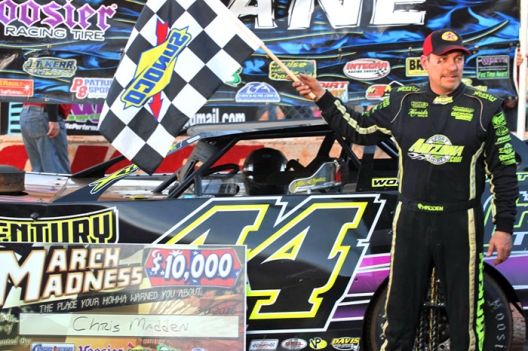 Even after leading all 35 laps of Saturday afternoon's weekend opener on the Southern All Star Dirt Racing Series, the 40-year-old driver from Gray Court, S.C., went back to work that evening, testing at the 4/10-mile oval to continue tweaking his Longhorn Chassis.

Those test sessions helped Madden continue his weekend dominance throughout Sunday afternoon as he led all the way in the 60-lap finale for a $10,000 payday, giving him $13,000 during Cherokee’s traditional season-opening weekend.

Madden kept polesitter and runner-up Casey Roberts of Toccoa, Ga., in check through lapped traffic in Sunday’s main event to notch his 48th career Southern All Star victory, which ranks second on the all-time list.

“Well you never know until it’s over with you never know what could happen,” Madden said of the daytime racing surface. “Casey, you know, he’s tough in these conditions like this. You know, he grew up at Lavonia, so this is an every-weekend type deal for him.

“We had a great car. We stayed and tested last night, and we found a few things. And (the crew) stayed up — Tommy and Jeff and Patrick and all them guys — stayed up late last night preparing this thing for today. I’d like to thank them guys for what they do for me.”

Madden took the checkers 1.193 seconds ahead of Roberts with Chris Ferguson of Mount Holly, N.C., Brandon Overton of Appling, Ga., and Ross Bailes of Clover, S.C., strung out behind them.

Roberts was Madden’s only serious challenger, taking a few peeks on the outside as the frontrunners worked slower cars, but he couldn’t find a way by.

“We just come up a little bit short today. We definitely had a second-place car here. Congratulations to Chris, he did an awesome job. We just thank the Lord for all his blessings and all the fine people that help me,” Roberts said. The slower cars “made it interesting there. Sometimes that lapped traffic, a lot of times it’s better to be running second through that stuff. But, he did a great job, congratulations to him, and hopefully we can improve next time we come.”

The double-wide restarts caused a few tense moments but benefitted Ferguson, who started sixth and picked his way to a third-place finish.

“Man, the restarts, (Brett Hamm) messed up on one restart and let me get by him and (Brandon) Overton, and Ross (Bailes) kind of slip up there on that one restart. Anytime the Lord puts you in the lower lane on a day race, all you can do is thank him.

“Really, we had a better car than where we were. We found a lot of things wrong after the heat race. We’re still struggling, but for us to not be great and run third behind Chris and Casey, I’ll take it any day of the week.

“We just worked our butts off. Hopefully we keep getting better. This car was the one we ran last year, but we front-clipped it, so it’s a lot different now. I think if we keep working harder we can hopefully get back up there in front of (Madden and Roberts).”

The race was slowed by three cautions, the first when Kevin Wilson had a flat right-rear tire in turn three on lap 26 and again when Jim Rogers slowed with a flat on lap 38. Josh Langley’s lap-55 spin between three and four (after being brushed by the leading Madden) drew the final yellow.

Madden’s victory gave him victories in three straight starts at Cherokee going back to 2015’s Blue-Gray 100.

Notes: Going back to last season, Madden has captured nine of his last 17 starts. … He has two victories this season in five starts. … Cherokee veteran and hometown driver Dennis Franklin never cracked the top 10 and retired after 30 laps. … Trent Ivey of Union, S.C., who finished 16th in the Southern All Star event, captured the SECA-sanctioned Crate Late Model feature, earning $2,000. … Eleven Southern All Star competitors completed 60 laps while 15 were running at the finish.