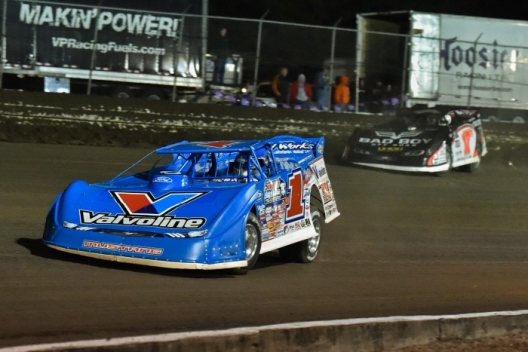 The 27-year-old superstar from Shinnston, W.Va., continued his assault on Georgia-Florida Speedweeks, earning his sixth Super Late Model win overall with a dominant flag-to-flag effort off the pole position in the first of three WoO events to conclude the 45th annual DIRTcar Nationals.

Richards was never seriously challenged en route to his first WoO victory of 2016 and second triumph in four DIRTcar Nationals races with his Rocket Chassis house car. The three-time WoO champion earned $10,000 for his 59th career win on the national tour.

“It’s been crazy how we’ve started the year,” said Richards, who won a pair of Lucas Oil Late Model Dirt Series features at both Golden Isles Speedway near Brunswick, Ga., and East Bay Raceway Park in Gibsonton, Fla., before arriving at Volusia. “It’s been a lot of fun. The guys have been working hard and the new car’s been a dream to drive. We just gotta keep trying to make the right decisions.

“(Shane) Clanton fired off at the beginning of the year last year (with five Speedweeks wins including four during the DIRTcar Nationals) and it was like, ‘How is he so fast?’ Well, it just takes a lot of hard work and everybody working together to make the right decisions. In this sport you just try to ride the wave, and right now it’s up for us and hopefully we can ride it awhile.”

Dale McDowell of Chickamauga, Ga., started from the outside pole and chased Richards from the second spot for virtually the entire distance, losing the position for only a couple brief circuits when Jonathan Davenport of Blairsville, Ga., slipped by him on a lap-25 restart. The 49-year-old stayed relatively close to Richards over the final nine laps after trailing earlier by as much as a straightaway but ultimately steered his Team Dillon Racing Warrior car across the finish line 1.913 seconds behind the victor.

Davenport, 31, settled for a third-place finish in the K&L Rumley Longhorn Race Car — his third podium placing (without a win) in as many nights. He secured the spot on lap 29 when he overtook Scott Bloomquist of Mooresburg, Tenn., and closely followed McDowell down the stretch but couldn’t summon the speed to climb higher.

Bloomquist lost contact with the lead trio late in the race and finished fourth in his Sweet-Bloomquist car and Rick Eckert of York, Pa., quietly advanced from the 12th starting spot to place fifth in Paul Crowl’s Longhorn.

Richards credited a healthy dose of his speed to a risky tire choice. His team decided to go with a 20-compound Hoosier right-rear tire that was softer than most of his rivals.

“You just kind of ponder it,” Richards said when asked how he arrived at his rubber selection. “It’s always a gamble. You could be hero or zero, and tonight it worked out. I don’t know if we had a 30 (compound tire) on whether we still could have won, but I think our car still would’ve been good.

“Even though we gambled a little bit on tires, we still had a phenomenal race car. I didn’t know if (the right-rear) was gonna hold up or not, so I just tried to be patient and ride the bottom. Then we got stuck in lapped traffic (during the race’s first half) and I moved up around them and it actually felt faster up there.”

Richards could sense that his right-rear tire was wearing out when the green flag flew after a final caution flag on lap 41, but he had plenty left to maintain control over the field once he found his rhythm.

“That last restart I wasn’t really hitting my marks like I should’ve been and I got a little anxious,” Richards said. “I think (McDowell and Davenport) stayed with us pretty close, so I had to settle back down and be smooth and be patient and finish it off.”

Richards closed with a flourish, pulling away to win by nearly a half-straightaway on a half-mile oval that wasn’t easy to master.

“I love the track now,” said Richards, whose ninth career DIRTcar Nationals victory moved him into sole possession of third on the event’s all-time win list behind only Hall of Famers Billy Moyer of Batesville, Ark. (18 wins) and Bloomquist (11). “We were always good here in previous years when it was more bottom dominant, and then last year the top was really fast compared to the bottom. Now, you don’t know if you need to be on the bottom, middle or the top — you can move around, and you’re definitely always busy. It’s always changing. I don’t know if that’s the way they’re prepping it or if it’s the big-blocks (DIRTcar Northeast modifieds) that polish it off, but it’s been different every night.

“It’s a tough place to figure out, but I learned a lot (about driving the track) from Scott (Bloomquist) last night in the heat race,” he added. “When he passed me in the heat and went off and won it, I learned a lot from watching him. I just tried to apply it today and it worked out.”

Both McDowell and Davenport used harder-compound tires than Richards and couldn’t match the speed of Speedweeks 2016’s most prolific winner.

“He had a little bit different tire combination so he could move out (higher on the track) and maintain traction just a little bit,” said McDowell, who improved from his third-place finish in Wednesday night’s 40-lap UMP DIRTcar-sanctioned feature. “We was a little harder (on tire choice), so if I got out (high) my left-rear drove harder than my right-rear and it just pushed me a little bit.

“It was a good run for us tonight. Starting position’s everything and we were fortunate to start up front, but our car’s pretty good so we’ll keep nipping away at it and maybe we can get one before the weekend’s over.”

Davenport continued his pursuit of a first-ever win at Volusia.

“I really want to take one of them gators (trophies) home with me,” Davenport said. “We still just missed it just a little bit. Tonight I was just way too free going down the backstraightaway. I just had to have a little bit of traction in my left-rear where I could drive straight, but I just couldn’t get down in it at all.

“(Richards) picked the right tire,” he added. “I thought me, Dale and Scott had the right tire on to get down that backstraightaway to help us, but I don’t think it really mattered.”

Four caution flags slowed the feature. Brian Shirley of Chatham, Ill., brought out the first on lap six when he slowed and then pitted. Dennis Erb Jr. of Carpentersville, Ill., fell off the pace to trigger caution conditions on lap 21 and Tim McCreadie of Watertown, N.Y., who ran as high as third, slowed with a right-rear flat tire while holding fourth on lap 28. The final caution was needed on lap 41 when Brandon Overton of Evans, Ga., slowed and then retired with a slightly overheating car.

Young Georgian Austin Smith was strong for the second consecutive night, wrestling the lead from Ricky Weiss on lap four and rolling on to defeat Rick Eckert by 1.024 seconds. Dillon Wood overtook Pancho Lawler in the final laps to finish third. Chad Hollenbeck brought out a caution flag on lap six when he spun off turn two; on the ensuing restart Weiss slammed head-on into the inside wall on the homestretch after contact with Eckert as the contested second place broke the right-front suspension of Weiss's car.

Scott Bloomquist dominated the entire distance, taking the checkered flag 2.803 seconds in front of Dennis Erb Jr. Eric Wells took the third and final transfer spot. Coleby Frey struggled mightily, bringing out caution flags on lap one and four due to spins at opposite ends of the track.

Jonathan Davenport battled past race-long pacesetter Brian Shirley with an inside move through turns one and two on a lap-seven restart and marched on to win by 1.429 seconds over Boom Briggs. Both Briggs and Jimmy Owens slipped by Shirley following a lap-eight restart, leaving Shirley fourth at the finish and out of a transfer spot. Caution flags were needed on lap four for Nick Kurtz's spin between turns three and four; lap six for Joey Coulter's spin on the inside of turn two; lap seven for Reid Millard's twirl in turn two; and lap eight for another spin by Coulter in turn four.

Dale McDowell led all the way, but he had to hold off a furious last-lap bid from Tim McCreadie, who finished just 0.223 of a second behind in second. Steve Casebolt was right behind the leaders in third. The race's big moment came on lap four when Chris Ferguson spun between turns three and four while running, collecting fourth-place Justin Rattliff in the process.

Josh Richards rolled to a convincing victory, beating Don O'Neal to the finish line by a commanding 4.926 seconds. Jason Feger came out on top of the struggle for the third and final transfer spot. The race's only caution flag flew on lap seven when second-running Jared Landers's slowed with a broken driveshaft, which was left on the homestretch.

Brian Shirley of Chatham, Ill., turned the overall fastest lap of time trials, circling the oval in 16.362 seconds during the second group. He will start from the pole in the fourth of six qualifying heats.

Josh Richards of Shinnston, W.Va., was quickest in the first group at 16.401 seconds, earning him the pole for the first heat.

Shane Clanton of Zebulon, Ga., who won all three WoO events during last year's DIRTcar Nationals, will have some work to do after timing only 14th-fastest in the first group.

Frank Heckenast Jr. of Frankfort, Ill., experienced trouble during qualifying, pulling immediately into the infield before recording a timed lap.

Another clear, sunny day with temperatures around 70 ushers in a three-race burst of World of Outlaws Craftsman Late Model Series action to conclude the 45th DIRTcar Nationals. … The car count continues to build, reaching a week- and Georgia-Florida Speedweeks-high 58 entries. … A new entry is WoO rookie aspirant Chris Ferguson of Mount Holly, N.C., who will make his Volusia debut with his Longhorn Race Car. Why did Fergy have to skip the first three nights of the DIRTcar Nationals after competing in last weekend’s WoO doubleheader at Screven Motor Speedway in Sylvania, Ga.? He responded by pointing to the Butlerbuilt Racing Seats logo on his polo shirt. “I had to go home and work for a few days,” Ferguson said. … Other first-time entrants this week are Dillon Wood of New Smyrna Beach, Fla., who is contemplating a WoO run this season after running a potion of the tour in 2013 and then largely sitting out the 2014 and ’15 seasons; Tim Lance of Brimfield, Ill., who is teamed up with Jason Feger of Bloomington, Ill., for Speedweeks; and Matt Sponaugle of Wiley Ford, W.Va. … Sitting out the evening’s action is Mark Whitener of Middleburg, Fla.

Round 4 of the six-night DIRTcar Nationals features a 50-lap World of Outlaws Craftsman Late Model Series A-Main paying $10,000 to win. It kicks off three consecutive nights of WoO action to conclude the DIRTcar Nationals.