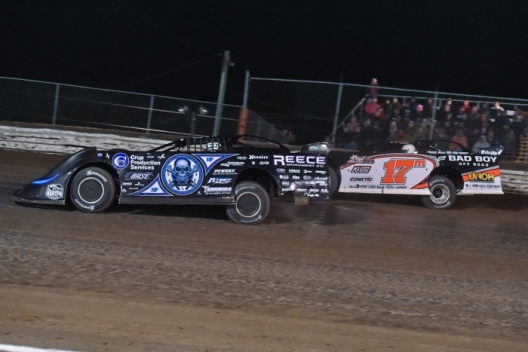 With a fresh Andy Durham-built bullet underneath the hood of his Sweet-Bloomquist machine after engine trouble ended his Tuesday-night outing one lap into a heat race, the 52-year-old Hall of Famer from Mooresburg, Tenn., passed Dale McDowell of Chickamauga, Ga., for the lead on lap six and controlled the remainder of the distance to pocket the $10,000 top prize.

The checkered flag put Bloomquist in an undeniably jovial mood. He even offered up with a new victory-lane catch phrase in the midst of his excitement.

“We stuck around in Tampa (after the Lucas Oil Late Model Dirt Series Winternationals at East Bay Raceway Park that ended last Saturday night) and played some (slot) machines and high stakes (at a casino),” Bloomquist said over the p.a. system after the race (and just before he playfully bit the snout of the gator-shaped trophy he received). “There was this one machine that kept dropping all these jewels all the time and I’d just get drunker than hell and scream, ‘Let it rain.’

Bloomquist’s arch rival from the Lucas Oil Late Model Dirt Series, Jonathan Davenport of Blairsville, Ga., hustled forward from the ninth starting spot to second place by lap 13 and closed to within three car lengths of the leader on the 25th circuit, but a scrape with a lapped car slightly bent the right-front suspension of his K&L Rumley Longhorn Race Car and left him unable to keep pace with Bloomquist.

Davenport, 31, crossed the finish line 4.310 seconds — a full straightaway — behind Bloomquist, who captured the big-money final night of UMP DIRTcar-sanctioned action during the DIRTcar Nationals for the third consecutive year. Bloomquist also extended his DIRTcar Nationals winning streak to six years in a row with his 11th career triumph in the mid-winter motorsports meet.

McDowell settled for a third-place finish after starting from the outside pole and leading laps 1-5 in the Team Dillon Warrior Race Car. Josh Richards of Shinnston, W.Va., charged forward from the 13th starting spot to finish fourth in the Rocket Chassis house car one night after reaching victory lane and Rodney Sanders of Happy, Texas, steered his MB Custom machine to a fifth-place result.

Bloomquist completely turned around his fortunes in a 24-hour period. He knew, however, that his DNQ on Tuesday night was an aberration.

“We don’t really know exactly what happened last night when we didn’t get to race,” Bloomquist said. “But in four years (using Durham powerplants) we never even pulled a valve cover off an engine, never had to adjust a valve, never had a single problem, so whatever did happen I’m sure it was pretty much a fluke.”

Bloomquist was back at full song in the Hump Day affair, finding the rhythm and pace necessary to turn back Davenport’s potential late-race threat before it really ramped up.

“There’s some tough competition here and the way Jonathan’s been running you never discount him anymore,” Bloomquist said. “He seems like he always gets going. I never did know where he was at, never had anybody I could see signaling me. I just stayed focus on the marks I wanted to hit and just didn’t worry about it.

“The car had great traction. It really was as good as you could hope for here.”

Davenport recorded a career-best finish at Volusia, besting the third-place finish he recorded on Tuesday night and once during the 2015 DIRTcar Nationals. He just mourned the fact that the UMP DIRTcar event’s qualifying format hampered him for the second straight night.

“I keep getting better at this place as far as driving and (crew chief) Kevin (Rumley) keeps putting a great car up under me,” Davenport said. “We definitely had a good hot-rod tonight. I think we were a little better than Scott early until we got into lapped traffic. He could just maneuver a little bit.

“I (also) got under (the lapped) Jason (Feger) down here and he slipped out of the groove and come back down and I hit him in the right front. It didn’t quite steer as good after that.

“All in all, second tonight, we’ll be happy with that,” he added. “We’re just gonna have to slow down a little bit qualifying at these UMP shows I guess. I tried to sandbag a little bit and still went fast time in my group, so if we could ever start in the top five, top six, and not have to burn our stuff up so much getting up to the top two, top three, I think we’ll be alright.”

McDowell, 49, conceded that he simply had a third-place car.

“We had a pretty good night, but those guys were just a little better,” McDowell said of Bloomquist and Davenport. “But tonight’s our second night out (of the week), so I was able to see kind of where they were beating us at so we know what areas to work on.”

The race’s lone caution flag flew on lap six when Tim McCreadie of Watertown, N.Y., slowed on the backstretch while running in ninth place. He retired from further action due to a broken right-rear brake line that occurred when he jumped the cushion.With the UMP DIRTcar-sanctioned portion of the DIRTcar Nationals complete, the week concludes Thursday-Saturday with three consecutive nights of World of Outlaws Craftsman Late Model Series competition. Each program features a 50-lap A-Main paying $10,000 to win.

Lernerville Speedway regular Michael Norris pulled off an upset triumph, blasting around the outside of Shane Clanton to grab the lead on lap two and marching on to defeat the defending WoO champion by 1.054 seconds. "This is like a dream come true to run with these guys, let alone beat them," Norris said. Chub Frank held off Gregg Satterlee to finish third.

Tyler Bruening led all the way, turning back an early challenge from Rick Eckert to take the victory by 0.711 of a second in his Capital Race Car. Eckert finished second and Donny Schatz came out on top of the battle for third. Brandon Sheppard was announced as jumping into Tyler Clem's car for the heat and finished eighth.

Rodney Sanders had his MB Custom machine on a rail, rolling to a flag-to-flag victory by 2.070 seconds over Jonathan Davenport. Davenport exploded from fourth to second on laps four and five — passing Darrell Lanigan and Jared Landers with inside moves — but didn't have enough time to run down Sanders. Landers grabbed the third and final transfer spot.

Scott Bloomquist worked hard to emerge victorious; he shot underneath Josh Richards for second off turn two and then race-long pacesetter Austin Smith for the lead through turns three and four on lap six. Smith fought back on lap seven and nearly regained the lead but fell short, finishing 0.411 of a second behind in second. Richards placed third.

Scott Bloomquist of Mooresburg, Tenn., was one of the first drivers to hit the track during time trials and turned the fastest lap overall, touring the half-mile in 16.106 seconds.

Jonathan Davenport of Blairsville, Ga., was a group fast-timer at 16.466 seconds, but his streak of five straight overall fast-time honors came to an end.

On another brilliantly sunny day with temperatures in the 70s, a DIRTcar Nationals- and Georgia-Florida Speedweeks-high 52-car field is signed in for competition. … Drivers making their first starts of the week are Jimmy Owens of Newport, Tenn., Brandon Overton of Evans, Ga., Tyler Erb of New Waverly, Texas, and former NASCAR Camping World Truck Series regular Joey Coulter of Charlotte, N.C., who is eyeing a bid for World of Outlaws Craftsman Late Model Series Rookie of the Year honors in 2016. … The first meeting of the the Dirt Late Model rules committee put together last month by WoO director Tim Christman took place on Wednesday afternoon away from the track at a downtown location. More than 15 series and manufacturer representatives attended the gathering, which was chaired by Eldora Speedway general manager Roger Slack. … Steve Casebolt of Richmond, Ind., saw his rough DIRTcar Nationals start continue on Tuesday night. After being involved in a crash on Monday evening, Casebolt improved to win his heat race on Tuesday and started fifth in the 30-lap feature but was forced to retire on lap six while running eighth due to an oil leak. … Gregg Satterlee of Indiana, Pa., had what was shaping up as his best run ever at Volusia go south in the final circuits of Tuesday night’s feature. He firmly held second place for the race’s first 25 laps but hit a hole in turn one just before a caution flag flew with five laps remaining, bending his car’s nosepiece so much that he struggled to steer around the half-mile oval on the two ensuing restarts and tumbled to 14th in the final rundown. “It was like having a snowplow attached to the front of the car,” Satterlee said. “We had a good, solid second-place car until I hit that hole.” … Brandon Sheppard of New Berlin, Ill., had his Best Performance Motorsports trailer packed up Wednesday afternoon, ready to start the trip back to the team’s shop in St. Marys, Ohio, after the evening’s racing program. He racing week ended after he was sidelined by engine trouble during Tuesday night’s time trials; it was the second motor he hurt during Speedweeks and the team decided to withdraw from further competition rather than pull out their 2015 car that still carried a powerplant and run it or swap the engine into their new Rocket XR1 machine.

Round 3 of the six-night DIRTcar Nationals features a 40-lap UMP DIRTcar-sanctioned A-Main paying $10,000 to win. It’s the last evening of UMP action before the World of Outlaws Craftsman Late Model Series takes the spotlight on Thursday, Friday and Saturday nights.

Tuesday night’s program includes group qualifying, six heat races, B-Mains and the 40-lap headliner. Group qualifying by heat races will be utilized; heats will be aligned with the four fastest qualifiers from each group inverted and the heat winners will redraw for the top-six starting spots in the feature.