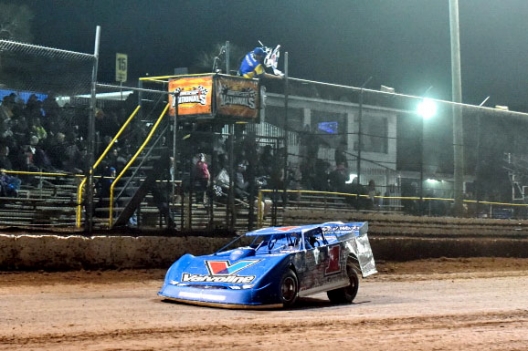 Reaching victory lane at the sprawling half-mile oval for the first time since 2013, Richards took advantage of starting from the pole position to ring up a convincing flag-to-flag triumph in Tuesday night’s 30-lap UMP DIRTcar-sanctioned Super Late Model feature during the 45th annual DIRTcar Nationals.

Richards, 27, was in a league of his own, steering his Rocket Chassis house car away from the pack with ease after each of the race’s five caution flags. He built an edge of over a straightaway before his final winning margin was shrunk to a modest 1.611 seconds over Tim McCreadie of Watertown, N.Y., after a pair of cautions in the final five circuits.

The $7,000 victory was the eighth of Richards’s career during the DIRTcar Nationals but first in three years. He didn’t compete in the 2014 DIRTcar Nationals because he was sidelined by nerve problems in his hands and struggled throughout last year’s meet.

“I love this track,” said Richards, who finished seventh on Monday night in the opener of the six-race Dirt Late Model week. “It’s one of those things where you could win here and not line up the next day. It’s a tough place — just when you think you got it figured out, it changes. It’s definitely challenging for a driver.

“This is a track where I was really wanting to turn things around after last year. We had a great Speedweeks last year if you take Volusia out of the equation, and we didn’t want to let that happen again.”

The 41-year-old McCreadie rebounded from a quiet 15th-place finish in Monday night’s DIRTcar Nationals opener, advancing from the sixth starting spot to claim the runner-up money in his Sweeteners Plus Longhorn Race Car. He overtook Jonathan Davenport of Blairsville, Ga., on a lap-27 restart to reach second but didn’t have enough time to mount a charge at Richards.

Davenport, who started 12th, settled for a third-place finish in his K&L Rumley Longhorn after sitting out Monday night’s lidlifter. He made one memorable burst — on a lap-six restart he vaulted from ninth to fourth in a single lap using the extreme outside groove — and reached second place on lap-25 restart when he slid past a fading Gregg Satterlee of Indiana, Pa., but he couldn’t offer Richards a challenge after a final caution flag flew on lap 27.

Mark Whitener of Middleburg, Fla., recorded a career-best DIRTcar Nationals finish of fourth after starting in the eighth position and Rick Eckert of York, Pa., steadily cut through the pack from the 24th starting spot to place fifth.

Satterlee, who started second and ran behind Richards for the race’s first 25 laps, tumbled from contention on the final two restarts. He bent his car’s nosepiece when he caught a hole in turn one just before a caution flag flew on lap 25, causing him to slow his pace drastically with an ill-handling machine and finish 14th.

While Richards dominated the event, his road to the checkered flag wasn’t completely smooth. He had to deal with track conditions that surprised him — and nearly ended his bid for the win in heartbreaking fashion, in fact — and a potential threat from Davenport, who entered the evening tied with Richards as the winningest driver of Speedweeks.

“Tonight they left a little bit of moisture in (the surface) and it dug up way more than I anticipated,” Richards said. “We’ve run some races like that before, but it kind of caught us off guard and we weren’t quite ready for that much rough in the corners.

“I was watching the (leader) board and I saw the 6 (Davenport) in second and I knew he was gonna try all he could. So I just tried to get after it those last few laps, and then I bounced so bad (entering turn three) coming to the checker. If I ran in hard and I hit it just right I could make up some time through there, but that lap I hit that hole and the car bottomed out. That lap it just bounced and I felt for sure we were gonna get passed.”

McCreadie, however, wasn’t close enough to take advantage of Richards’s stumble. He made his own miscue moments earlier.

“I made a big mistake that last lap,” McCreadie said. “I got snapped sideways down in (turns) one and two … I hit the bumps and kind of turned. I saw that (Richards) bounced in that (turn-three) hole, but I would have had to gotten off (turn) two better to be close enough to take advantage of that. I had troubles down there in three and four anyway because I was so tight, so it would’ve been tough to get by him no matter what.

“We’re just happy to be improving the whole time,” he added. “We learned a little from last night and made everything better. I actually got shuffled back so far at the beginning that I didn’t know how far we’d get up there, so we’re satisfied with second.”

Davenport, 31, appeared primed for a showdown of Speedweeks heavyweights with Richards, but the battle didn’t materialize even after a lap-27 caution flag deposited the defending Lucas Oil Series champion on Richards’s rear bumper.

“I just didn’t really have anything for Josh,” said Davenport, who matched his career-best finish at Volusia. “I gave it all I had there that last restart, but we done good just getting to where we were.

“We got rolling up there (on the outside) pretty good (early in the feature), but I just killed my tire, maybe just cut it a little wrong. It was the first night and we were testing a few things, so maybe we’ll know what not to do tomorrow.”

Five caution flags slowed the event. Don O’Neal of Martinsville, Ind., brought out the first yellow on lap one with a spin between turns one and two. Later, Austin Rettig of Sikeston, Mo., slowed on lap six; Rodney Sanders of Happy, Texas, spun in turn two while running sixth on lap 16; Dale McDowell of Chickamauga, Ga., stopped with a cut right-rear tire between turns three and four on lap 25; and Billy Ogle Jr. of Knoxville, Tenn., slid to a stop in turn two while eighth on lap 27.

Josh Richards shot to the lead on the opening lap, turned back an early challenge from Davenport and went on to triumph by 0.879 of a second over J.D. Donny Schatz finished third, overtaking Jared Landers for the position exiting turn four heading to the white flag.

Gregg Satterlee overtook Don O'Neal for the lead on lap three and pulled away to defeat the Indiana driver by 1.336 seconds. Kyle Bronson secured the final transfer spot.

Billy Ogle Jr. slipped past Dale McDowell to take the lead on lap two and never looked back, beating McDowell to the finish line by 0.404 of a second. Frank Heckenast Jr. passed Chub Frank for third on lap four and stayed there to the finish.

Tim McCreadie dominated the action, pulling away to lead all the way and win by 2.499 seconds over Austin Rettig. Ivedent Lloyd Jr. secured the third and final transfer spot.

Steve Casebolt led the whole, beating Mark Whitener by 1.488 seconds. Steve Francis advanced from the eighth starting spot to finish third. Cautions flags flew on lap one (Justin Rattliff stopped on the track) and lap three (Coleby Frye spun in turn two and limped to the pits with nosepiece damage). Brian Shirley, meanwhile, slipped high and slapped the turn-four wall on lap four, forcing him to pull off with damage.

Shane Clanton controlled the entire distance, easily outdistancing Rodney Sanders, who slipped past Ricky Weiss late in the race to finish second. Billy Moyer Jr., who won Monday's feature, fell one spot short of transferring. Scott Bloomquist was an early retiree, pulling off on lap one with smoke trailing from his machine.

Jonathan Davenport of Blairsville, Ga., continued his 2016 assault on racetrack timing clocks, ripping off a scorching lap of 15.797 seconds during the last heat-race group to record the evening’s overall fastest lap. It marked the fifth straight night of racing and eighth time in 11 Speedweeks events overall that he’s topped the qualifying chart.

Davenport only needed one lap to establish the evening’s fast time. He came up on Freddie Carpenter of Parkersburg, W.Va., after completing his first lap and backed off the gas to pull into the pits.

On an absolutely gorgeous day — crystal-clear skies and temperatures in the 70s — a field of 51 cars has signed in for competition. The turnout is the largest of Georgia-Florida Speedweeks. … Some heavy rain fell overnight, putting plenty of moisture in the half-mile oval’s new-for-2016 surface. Clay collected at a local farm was used to resurface the track before the DIRTcar Nationals. … Drivers joining the action tonight after sitting out Monday’s opener include Jonathan Davenport of Blairsville, Ga., Scott Bloomquist of Mooresburg, Tenn., Don O’Neal of Martinsville, Ind., Darrell Lanigan of Union, Ky., Mason Zeigler of Chalk Hill, Pa., Ivedent Lloyd Jr. of Ocala, Fla., Dennis Franklin of Gaffney, S.C., Dale McDowell of Chickamauga, Ga., Jordan Yaggy of Rochester, Minn., and Austin Smith of Cedartown, Ga. … Jimmy Owens of Newport, Tenn., has his car unloaded in the pit area but is not entered in the evening’s program. … Missing from Tuesday’s field is Chase Junghans of Manhattan, Kan., who slammed the homestretch wall head-on during Monday’s qualifying session after his steering locked up. His brand-new Capital Race Car — a machine that had a mere four practice laps on its odometer — sustained heavy front-end damage, sidelining it for the remainder of the week. “We’ll take it back (to the Capital shock), strip it down, put it on a jig and see how bad it is,” said Junghans, who reported some sore muscles but no significant injuries from a hit he called the hardest of his young Dirt Late Model career. “We might make a Jungle Gym out of it. Gunner (Shane Clanton’s son) already has one Jungle Gym to play on from Shane’s (car-crushing) wreck out in Tucson (in January).”

Round 2 of the six-night DIRTcar Nationals features a 30-lap UMP DIRTcar-sanctioned A-Main paying $7,000 to win. One more evening of UMP action will follow before the World of Outlaws Craftsman Late Model Series takes the spotlight on Thursday, Friday and Saturday nights.

Tuesday night’s program includes group qualifying, six heat races, B-Mains and the 30-lap headliner. Group qualifying by heat races will be utilized; heats will be aligned with the four fastest qualifiers from each group inverted and the heat winners will redraw for the top-six starting spots in the feature.