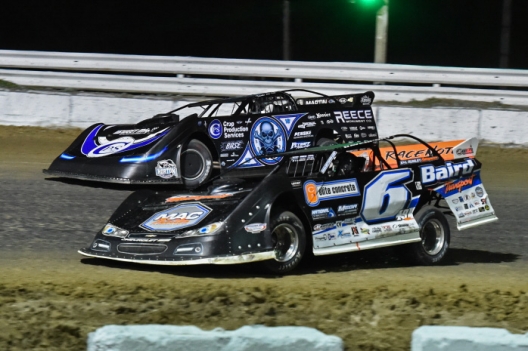 OCALA, Fla. (Feb. 14) — Jonathan Davenport went from sliding out of contention to adding another victory to his ledger in virtually the blink of an eye Sunday night at Bubba Raceway Park.

After falling back to eighth place on lap 12 following some rough-and-tumble circuits, the sublime driver from Blairsville, Ga., gathered himself and pulled off a stirring rally to capture the 50-lap Lucas Oil Late Model Dirt Series Bubba Army Winternationals feature.

Davenport, 31, charged past three cars on a lap-14 restart, slid past Gregg Satterlee of Indiana, Pa., for third on lap 16 and swapped second place with Josh Richards of Shinnston, W.Va., before gaining control of the position on a lap-23 restart. The defending Lucas Oil Series champion then glided inside race-long pacesetter Scott Bloomquist of Mooresburg, Tenn., to assume command on lap 31 and never looked back.

A final caution flag on lap 40 for Bloomquist, who slowed with a flat right-rear tire while running fourth and didn’t return because the blown rubber wrapped around his car’s wheel, put Richards on Davenport’s rear bumper. But Davenport handled the restart with ease, driving his K&L Rumley Longhorn Race Car to a short edge before crossing the finish line 0.881 of a second in front of Richards’s Rocket Chassis house car.

“Josh has been probably the best car in the country here at the start of the year,” said Davenport, who earned $10,000 for his fourth Lucas Oil Series triumph of the young 2016 season. “We’ve been really good too and Scott’s been really good. Scott would’ve been hard to beat tonight if he put on the right tire (Bloomquist’s softer 1300-compound Hoosier right-rear wore out quicker than Davenport’s harder 40-compound rubber), but it was just our night.

“It’s just great to come back from disappointment last night. We fought electrical issues all week at East Bay (Raceway Park) and it finally ended up breaking a motor for us (eliminating him from Saturday night’s A-Main). This will help a little bit pay the bill for that mistake.”

Brandon Sheppard of New Berlin, Ill., who relinquished his 15th starting spot during the pace laps when he pitted to bolt a softer 1300-compound tire on his Best Performance Motorsports Rocket XR1 car’s right-rear corner, steadily moved forward to finish third. He cracked the top five after a lap-30 restart and settled into his final fi finishing position upon Bloomquist’s departure with 10 laps remaining.

Outside polesitter Eddie Carrier Jr. of Salt Rock, W.Va., ran near the front of the pack throughout the distance and finished fourth in another Rocket XR1 and Frank Heckenast Jr. of Frankfort, Ill., advanced from the 24th starting spot to place fifth one year after winning his first-ever World of Outlaws Late Model Series A-Main at the 3/8-mile oval.

Davenport’s score provided yet more proof that he and crew chief Kevin Rumley are hell bent on doing their best to duplicate their historic 2015 campaign. Even a dramatic slip backward from the fourth starting spot couldn’t keep him from reaching victory lane for the seventh time overall this season.

“We started off pretty good,” Davenport said. “I was just kind of cruising around there ridin’, and we had a caution (on lap six) and we got stuck on the outside (running fourth) and guys on the inside just wasn’t very friendly. I got hit coming out of (turn) four and I had to lift, and that put the next car ahead of me and then he slid me down (in turn one) so then I got blowed out in the crumbs and three or four more got by me.

“Then I thought (Gregg) Satterlee was gonna spin out so I went to the outside and he didn’t spin out, so another couple passed me, and the next thing I know I’m almost out of the top 10. It was just circumstances, really, that put us back, though. I knew our car was pretty good, so we just had to be patient and get back in rhythm.”

Davenport did just that, picking off cars following restarts on laps 13, 14 and 15. He used the inside lane around the D-shaped, 3/8-mile track to climb toward the front.

“I started running the bottom down here in (turns) one and two where everybody else was still running the top and it started getting a little better and a little better,” Davenport said. “I could pass cars down the back straightaway, but once I’d get to turn three I’d be in the slime and couldn’t steer so I’d go all the way across the racetrack. I finally got that run in a little bit and got better down that back straightaway and could complete passes.

“Once I fell back I had to start making moves I didn’t really want to make, but everybody kept wanting to pound that cushion up there so I just kept circling around the bottom and being easy on my stuff. It actually worked out really good for me.”

Well aware that Bloomquist had opted to utilize softer tires, Davenport felt confident that outdueling Richards for second place on a lap-23 restart would ultimately be a deciding move.

“I knew Scott had a 1300 on and I had a 40 so he was almost in a different race by himself (during the A-Main’s first half),” Davenport said. “He was racing himself to see how long he could make it. I just knew I had to position myself for when Scott … I’m pretty sure he was gonna slow down or fall out or blow out or something, so it was really just a race up to second to see who could get there first. I knew the 40 (compound tire) would be better the longer we went just from what happened in the heat race (when tire wear was substantial).”

“I knew it was a matter of time before Scott faded because we knew that he was on a soft tire and that harder tire was stuck so much harder in the black once the race was (in its late stages),” said Richards, who started fifth. “We got a little too tight at the end once the track rubbered up really hard, but we still had a great race car.

“By the end of the race we were pretty much just riding. It was laned-up and we knew that our tires were starting to wear pretty good, so at that point there was no sense of going out there and trying to run hard and blow a tire out.”

Eight caution flags slowed the event, many for drivers slowing with flat tires. Among the entrants who triggered cautions due to cut or blown tires were Ivedent Lloyd Jr. of Ocala, Fla., who developed a right-rear flat on lap six while running third (he rallied to finish seventh); Tim McCreadie of Watertown, N.Y., who slowed on lap 13 with a down right-rear but came back to finish seventh; Don O’Neal of Martinsville, Ind., who lost a right-rear tire on lap 30 but still finished eighth; and Bloomquist, whose crew was unable to remove his right-rear wheel when he pitted on lap 40 because the rubber was tightly wound around it.

Notes: Davenport’s victory was his first-ever at BRP and the 20th of his career on the Lucas Oil Series. … Bloomquist’s 20th-place finish dropped him from first to a tie for third in the points standings, 125 points behind new leader Davenport. … Satterlee climbed as high as third from the 10th starting spot by picking up positions on restarts but had a car that was “too free” during long runs and ultimately fell to ninth in the final rundown. … Pearson was scheduled to start alongside Sheppard in 16th but also pitted during the pace laps to make a tire change. … Lucas Oil Series officials scrapped a planned B-Main and started all 26 entered cars. … The next action for the Lucas Oil Series is the March 18-19 doubleheader at Atomic Speedway in Alma, Ohio, and Brownstown (Ind.) Speedway.

Lucas Oil Series assistant director Rick Schwallie said officials decided to scrap the scheduled B-Main because tire wear was found to be heavy in the heats and start all 26 cars entered. ... The horn to line up the feature was blown just before 7:50 p.m. ... Scott Bloomquist rolls off from the pole position for the fourth consecutive night.

Ivedent Lloyd Jr. led all the way at his hometown track, beating Don O'Neal to the checkered flag by 0.599 of a second. Jared Landers and Steve Casebolt chased the leaders to the finish.

Eddie Carrier Jr. outgunned polesitter Josh Richards for the lead at the initial green flag and never looked back en route to winning the prelim by 0.613 of a second over the three-time World of Outlaws champion. Darrell Lanigan finished third while Jordan Yaggy placed fourth after slipping past Randy Weaver early in the distance.

Jonathan Davenport of Blairsville, Ga., continued his domination of Lucas Oil Series time trials, clicking off a lap of 14.185 seconds to earn fast-time honors for the fourth consecutive tour event.

Davenport will share the front row for the first heat with Scott Bloomquist of Mooresburg, Tenn., who was the fourth-fastest qualifier.

Other polesitters will be Josh Richards of Shinnston, W.Va., and Ivedent Lloyd Jr. of Ocala, Fla.

Bubba Raceway Park, which is owned by well-known radio show host Bubba (The Love Sponge) Clem, is the fourth track to host a Dirt Late Model event during Georgia-Florida Speedweeks 2016. … Bubba’s 13-year-old son, Tyler Clem, will make his first-ever Lucas Oil Series start. … No 2016 Lucas Oil Series regular has enjoyed more success at BRP than Darrell Lanigan of Union, Ky., who has won at least one World of Outlaws or UMP DIRTcar-sanctioned feature at the track in each of the last six years. … Other Lucas Oil Series travelers who have reached victory lane at BRP are Brandon Sheppard of New Berlin, Ill., and Don O’Neal of Martinsville, Ind. … Earl Pearson Jr. hails from Jacksonville, Fla., but tonight marks his first-ever start at BRP. … Defending tour champion Jonathan Davenport of Blairsville, Ga., will hit the track after his team swapped engines following his early departure from Saturday night’s feature at East Bay due to a seized-up powerplant. The smaller motor in Davenport’s K&L Rumley is the same one he used for the first two nights of action at East Bay. … Four drivers who competed in Saturday night’s WoO action at Screven Motor Speedway in Sylvania, Ga., are in tonight’s field: Josh Richards of Shinnston, W.Va. (a four-time Lucas Oil Series winner during Speedweeks and multi-time WoO victor at BRP), Frank Heckenast Jr. of Shinnston, W.Va. (a WoO winner at BRP last year), Steve Casebolt of Richmond, Ind., and Jordan Yaggy of Rochester, Minn. … Yaggy stopped at Ocala merely to change engines on a concrete surface before watching the evening’s race, but he decided to enter the program after seeing the small field of cars.

After a six-race run at East Bay Raceway Park in Gibsonton, Fla., the Lucas Oil Late Model Dirt Series shifts an hour-and-a-half to the northeast to close its Georgia-Speedweeks action with a first-ever visit to Bubba Raceway Park. The 3/8-mile, D-shaped track has hosted World of Outlaws Late Model Series programs during Speedweeks for the last four years.

Sunday’s program is made up of hot laps, time trials, heat races, consolations and a 50-lap main event.