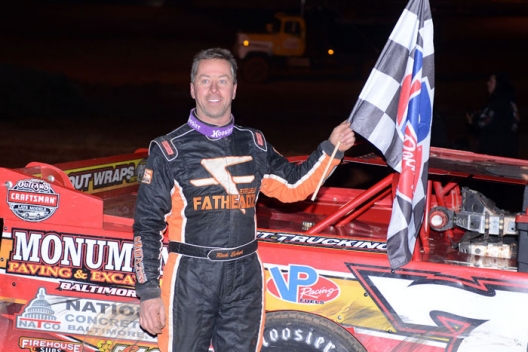 Starting on the outside pole, Ferguson charged to the lead at the drop of the green flag, with Eckert reeling in the North Carolina driver by the race’s halfway point. Eckert pulled ahead with just a dozen laps remaining in the main event, as Ferguson slowed with a flat tire just one lap later. The former World of Outlaws champion notched his 35th career series victory.

“My car wasn’t really bad last night, I just qualified terrible,” Eckert said after the race. “Tonight the racetrack was a little friendlier qualifying. I qualified a lot better and started on the front. It’s a really hard place to pass. We knew it was going to be tire wear there. I was fortunate to get into second on that start.

“I ran hard on (Ferguson) there for a couple laps and I thought, ‘This ain’t very smart, I better save my tires.’ He was driving into three pretty hard, pretty crooked. I just slowed my entry down and tried to drive in straight and save my tires as long as I could. I knew he went bald because he started getting really crooked. I tried to roll around him on the top a couple times and every time I did, he’d slide up across and I couldn’t get under him. Finally I snuck by him there.”

Briggs dedidcated his second-place finish to his father.

“We didn’t practice the other night because I’ve been in the hospital with my dad,” Briggs said. “Really, this one’s for my dad tonight. He’s laying in the hospital, he’s getting a little better, but I was up for 43 straight hours. I’ve just been off in qualifying. For me, to start 10th and run second on a one-lane rubber track … everybody just worked hard. It just all came together.”

“At the beginning of the race, I was actually fairly decent,” Covert said. “I was just riding a little bit and then I got that same tight situation and I had to slide the car. About halfway or so, we just didn’t have no tire left. But (Eckert) did a good job and (Briggs) had a really good car. Three Pennsylvania guys, that’s pretty awesome."

Outside polesitter Billy Ogle Jr. jumped to an early lead, with Pancho Lawler and Chesley Dixon tangling in turn four to draw a caution on lap two. Maintaining his lead after the restart, Ogle held off polesitter Kenny Pettyjohn to win the second consolation. Pettyjohn finished runner-up, with Chase Junghans improving one position to take the third and final transfer spot.

Charging around the high-side, outside polesitter Chub Frank shot to the front of the field at the drop of the green, fighting back challenges from polesitter Steve Casebolt for the lead. Making contact with Tyler Erb in a battle for the third and final transfer spot, Casey Barrow hit the turn-four wall on lap nine to draw a caution. With several drivers piling up in turn one on the final lap, Frank picked up the win, with Casebolt finishing runner-up. Erb ran third to transfer to the feature.

Polesitter Brian Shirley jumped to the lead on the opening lap, with a yellow flag waving for a tangle in turns three and four involving Kelly Guy, Pancho Lawler, Tyler Bruening and Jordan Yaggy. Shirley pulled away to win the fourth heat, with Chris Ferguson holding on to his second-place starting position. Casey Roberts ran third, with Josh Richards improving two spots to finish fourth and transfer to the feature.

Charging to the lead at the drop of the green flag, polesitter Billy Moyer Jr. drove away from the field to win the third heat. Jason Covert held on to his second-place starting spot, with Coleby Frye outrunning Shane Clanton to run third. Clanton grabbed the fourth and final transfer spot.

Fourth-starting Chub Frank spun in turn four to draw a caution on the first lap, as front row starters Joey Coulter and Ray Cook battled for the lead. A yellow flew on the ensuing restart when Jason Feger spun in turn two. Donald Bradsher shot ahead of Coulter on the restart, pulling away from the field. Reeling in Bradsher, Coulter retook the lead on lap nine, winning the second heat race. Bradsher finished second, with Boom Briggs advancing from the eighth-starting spot to run third. As Brandon Overton hit the turns three and four wall on the final lap, Eric Wells ran fourth to transfer to the feature.

Saturday’s program will include time trials, heat races, consolations and the 50-lap feature event. Pure stocks and super streets are among other divisions in action.