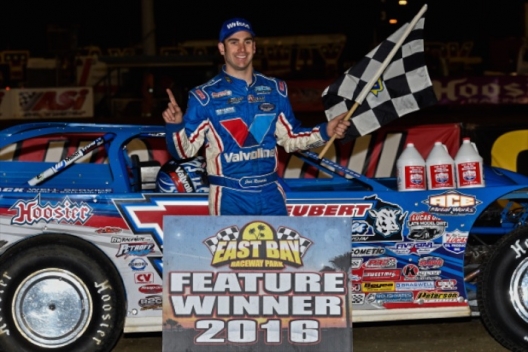 GIBSONTON, Fla. (Feb. 9) — Charging past outside polesitter Jared Landers of Batesville, Ark., on lap nine of 25, Josh Richards of Shinnston, W.Va., led the remaining distance to capture a $5,000 victory in the Tuesday night portion of East Bay Raceway Park’s Winternationals.

Edging ahead of polesitter Scott Bloomquist of Mooresburg, Tenn., Landers jumped to an early lead. But the defending Knoxville Nationals champion was unable to fight back challenges from Richards, who held nearly a straightaway lead over the field with five laps remaining in the main event. Richards scored his 10th career Lucas Oil Series victory, the fourth of his Georgia-Florida Speedweeks campaign.

“We’ve gotten on rolls before, but to win Brunswick and here has been really cool,” Richards said. "The guys have been working really hard and we got better yesterday as the night went and we just kind of left our car alone. The track was so drastically different. The speeds were up qualifying, but then the track blew off way quicker in the race and I anticipated it staying slicker way longer.

“Landers got the lead and I pulled down in the black a couple laps and I felt it grip up and already start to take rubber early. We were able to find it before he did and just got in line and road it out. It was a good night."

Bloomquist finished second with Tim McCreadie of Watertown, N.Y., holding on to his third-place starting position. Jonathan Davenport of Blairsville, Ga., charged from the ninth starting spot to finish fourth, with Eddie Carrier Jr. of Salt Rock, W.Va., rounding out the top five. Landers was out on lap 23 when contact with Bloomquist sent him spinning in turn two.

“We were just way too tight from the start of the race,” Bloomquist said. “Normally we don’t have to turn the car that sideways to be sure we finish the corner. We know what to do. We’ll be ready tomorrow.”

McCreadie was pleased with his third-place run and the consistency that he’s found over Georgia-Florida Speedweeks in his new Longhorn car.

“Everyone wants to win, and I want to win bad,” McCreadie said. “But I also want to leave content. A lot of nights you leave uncontent. I haven’t had consistency in probably six years, probably since I got hurt. It’s very draining when it goes that long of a stretch of not just knowing that you can finish near the front. We’ve been consistent every night and competitive every night and that’s all you can ask for."

It’s an all-Sweet-Bloomquist front row for the start of the 25-lap feature with Scott Bloomquist on the inside of Jared Landers, who is in his second season racing under Bloomquist’s tutelage. Bloomquist is bidding for his first East Bay win since 2013 while Landers has never reached victory lane at the track in a Dirt Late Model. … Tim McCreadie, who starts third, hasn’t won at East Bay since the 2011 Winternationals finale. … Devin Moran executed some of the best inside moves of the heats in the first prelim, including a pass of Mike Marlar to reach his final finishing position of second with his Tommy Pope-owned Barry Wright car. Despite his low-side hustling, he feels drivers would have a better chance to use the bottom if officials moved the inside marker tires in the turns. “It’s so fast around the top,” he said. “I think they almost should move in those tires a little bit. Where they are now, you can’t arc it enough to the bottom … you just wash up.” … After a near-spin between turns three and four on lap four of the first heat caused him to slip out of a transfer spot, Marlar’s night became even worse in the first B-Main. He started from the pole but lost control of his car on lap one and struck the turn-one wall head-on; Chad Hollenbeck, Bobby Pierce, Sonny Conley and James McKeown piled up in a chain-reaction scramble. Marlar said he struggled to get ahold of the track with the event’s mandated hard-compound tires. “It feels like you’ve got 50 pounds of air in your tire,” Marlar said while walking through the pit area holding a spring off his Capital Race Car that he called “destroyed.” … Randy Weaver scratched from his B-Main after a poor qualifying run and his involvement in a heat-race tangle with Greg Oakes and Chuck Julien damaged the left-front flapper of his Leon Henderson-owned Billy Moyer Victory Race Car. “You can’t spot these guys (in qualifying) and drive up through there,” he said. “We decided to call it a night. Mr. Henderson will be coming here tomorrow night so we’ll try to get it right and put on a show for him.”

Polesitter Jimmy Owens outdueled Alex Ferree to win the second consolation. Ferry took the runner-up spot, with Austin Kirkpatrick improving one position to run third. Mason Zeigler edged out Kyle Bronson at the checkers to finish fourth and transfer to the feature.

Polesitter Mike Marlar hit the turn one wall on the first lap, collecting Chad Hollenbeck, Bobby Pierce and others to draw a red flag. Brian Shirley took the lead on the restart, picking up the win in the second consolation. Pierce edged Nick Davis on the final lap to finish second, with Davis running third. Gregg Satterlee grabbed the fourth and final transfer spot.

Polesitter Josh Richards jumped to an early lead, with a yellow flag waving on lap three when Greg Oakes spun in turns one and two. Richards picked up the heat race win, with Dennis Erb Jr. holding on to his second-place starting spot. Don O’Neal ran third, with Steve Francis advancing two spots to take the fourth and final transfer spot.

Darrell Lanigan, Eddie Carrier Jr., and Jared Landers went three-wide down the backstretch on the opening lap, with Lanigan edging ahead at the line. A yellow flag flew on the first lap when John Gardner spun in turns one and two. Landers slid past Lanigan on lap three, picking up the win in the third heat. Carrier advanced two spots to finish second, with Lanigan dropping back to run third. Ricky Weiss finished fourth to transfer to the feature.

Charging around the outside, second-starting Tim McCreadie shot to the lead at the start, leading all eight laps to win the second heat race. Polesitter Tim Dohm took the runner-up spot, with Brandon Sheppard improving one spot to finish third. Justin Rattliff grabbed the fourth and final transfer spot.

Outside polesitter Scott Bloomquist edged ahead of polesitter Mike Marlar to take an early lead. Devin Moran slipped past Marlar for the second-place spot, with Marlar getting sideways in turn four to drop back to fifth. Bloomquist grabbed the heat race win, with Moran holding on to second. Jonathan Davenport ran third, with Earl Pearson Jr. finishing fourth to transfer to the feature.

Weather conditions for Tuesday night’s program are cool and overcast with a stiff breeze. … The field has increased to 41 cars with the addition of six new entrants, including Clint Bowyer Racing teammates Don O’Neal of Martinsville, Ind., and Darrell Lanigan of Union, Ky.; Scott Bloomquist of Mooresburg, Tenn., who arrived at the track today; Mason Zeigler of Chalk Hill, Pa., who sat out Monday night’s action to let Jonathan Davenport of Blairsville, Ga., drive his car; and Florida racers Austin Kirkpatrick and Mark Whitener. … Davenport, meanwhile, returns to his familar K&L Rumley No. 6 for Tuesday evening’s competition. He will be behind the wheel of a brand-new Longhorn Race Car. … Steve Francis of Ashland, Ky., made a planned engine change in his Tim Logan Racing machine this afternoon. … Parked next to Francis in the pit area is Devin Moran of Dresden, Ohio, who spun in Monday night’s feature after turn-two contact with Francis. Moran survived the encounter with only minor suspension and bodywork damage. … Monday’s winner Josh Richards of Shinnston, W.Va., has a bright orange spoiler indicating his status as the current Lucas Oil Series points leader on his car. The World of Outlaws Late Model Series regular’s father and car owner, Mark Richards, had the spoiler shipped from the Rocket Chassis shop and it arrived this afternoon. … Kyle Bronson of Brandon, Fla., is behind the wheel of his uncle Wayne Hammond’s Longhorn Race Car, a machine that saw its first feature action on Monday night. He said the Troy Baird-owned machine that he drove in two events at Golden Isles Speedway near Brunswick, Ga., remains in his shop nearby and he might return to its seat for some action during next week’s DIRTcar Nationals at Volusia Speedway Park in Barberville, Fla. … On hand this week to provide extra manpower to Brandon Sheppard’s Best Performance Motorsports team is UMP DIRTcar Late Model racer Jason Riggs of Harrisburg, Ill., who ran his family-owned equipment on the 2014 UMP DIRTcar Summernationals with Sheppard’s current crew chief Randall Edwards overseeing his effort. “I just listen to dad and do the dirty work,” said Riggs, using his affectionate name for Edwards.