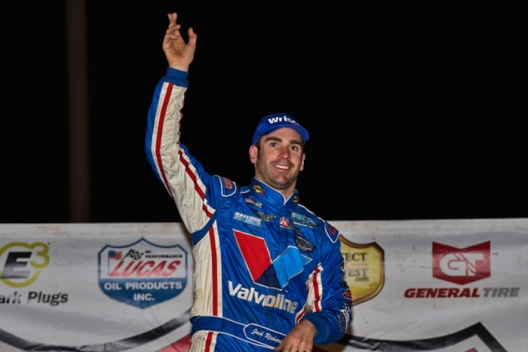 Starting on the outside pole, Owens charged to an early lead, setting a blistering pace over the field. But it wouldn’t be enough to hold off the charging Richards, who captured his ninth career Lucas Oil Series triumph, the third of Georgia-Florida Speedweeks campaign.

“We had a pretty good car,” Richards said after the race. "I pushed in hot laps. We kind of unloaded how we were at Brunswick and I knew that that wasn’t the right direction. I pushed a little in qualifying and we worked on the car a little bit and got it better in the heat race.

“Lining up for the feature, I figured 25 laps, this place is hard to pass. But the track guys did a great job and you could move all over it. I had a lot of grip and we started passing a few cars. I started running the bottom in one and two because everyone was committed to the top and I knew I could maintain in the bottom. But once we got up on top, we got some speed rolling and started picking them off."

“We struggled up there at Brunswick,” Owens said. “We wasn’t that good out of the box, but there during the feature I thought I had a really good car and we hit on some stuff. We come down here and pulled out our backup car and did the same thing and was good right out of the box. Hopefully we’ll have a good week here.”

“I didn’t drive hard enough,” Landers said. “I see what it took to win the race and I know for a fact I had the car to take the lead. I was wanting to race smart and be easy and try to pass the guys without having to slide them. But if you want to win, you do what (Richards) did and I have complete respect for it, because he did it. And I’m going to learn to do it."

Notes: The race was slowed by three cautions. ... A yellow flag waved on lap one when Devin Moran spun coming out of turn two, collecting John Gardner. … A second yellow flew on lap three for a tangle in turns three and four involving Allen Murray and Bobby Pierce. … Billy Moyer Jr. drew a caution on lap 10 when he slowed in turn four.

Almost nine years to the day since winning his only Winternationals feature at East Bay, Tim Dohm will start from the pole position in the 25-lap feature after capturing the evening’s first heat. The 55-year-old from Cross Lanes, W.Va., was very pleased with the performance of his brand-new Swartz car. “That’s the first time out of the box for the car and it was pretty good,” said Dohm, whose East Bay triumph came on Feb. 7, 2007. “I think it’s probably gonna slick up pretty good for the feature so we’ll see if we can make the right changes.” … One of the happiest drivers in the pit area after heat action was Greg Oakes of Franklinville, N.Y., whose fourth-place run in the final prelim sent him to the A-Main in his first-ever appearance at East Bay. He repelled former Lucas Oil Series champion Earl Pearson Jr. of Jacksonville, Fla., to preserve the last transfer spot. “Qualifying here is like winning a feature at home,” said Oakes, who won the 2015 championship at Stateline Speedway in Busti, N.Y. “When you come here you know you’re gonna have to beat the best.” … Jonathan Davenport appeared to have little trouble getting comfortable in Mason Zeigler’s Longhorn Race Car after he blazed to the overall fastest lap in qualifying. “It ain’t like a recliner you’re used to at home,” he said of the car after time trials, “but it’s pretty good.” He failed to capitalize on a pole starting spot in the third heat, however, slipping high in turns one and two on the opening lap and falling to fifth — the spot he finished, forcing him to make his way into the feature with a runner-up finish in the second B-Main. … Freddie Carpenter of Parkersburg, W.Va., saw his night go south before he even turned a complete circuit around the third-mile oval. He hit the homestretch wall at the start of hot laps, heavily damaging the right side of his car. “As soon as put my foot on the gas when the green came out I just got in the slop and it pulled me into the wall,” he said. “We tore up a bunch of stuff on a brand new (Kryptonite) car.” Carpenter made it out for the second B-Main after using a Port-A-Power to hastily straighten the right-front frame rail of his machine, but he’ll need to make more permanent repairs before Tuesday’s action.

Second-starting Earl Pearson Jr. jumped to the lead at the start, fighting back challenges from polesitter Jonathan Davenport to win the second consolation. With the top-two cars pulling away from the field, Allen Murray finished third, with Justin Rattliff running fourth to transfer to the feature.

Second-starting Jimmy Owens charged to the front of the field at the drop of the green, as polesitter Jonathan Davenport jumped the berm to fall back to fifth. A yellow flag flew on lap six when Chad Hollenbeck stopped on the frontstretch. Owens led the entire eight-lap distance, holding off runner-up finisher Tim McCreadie. Dennis Erb Jr. ran third, with Steve Franis finishing fourth to transfer to the feature. Davenport ran fifth.

Outside polesitter Randy Weaver jumped to the lead at the drop of the green flag, but fell to third-starting Mike Marlar on lap seven. Polesitter Brian Shirley finished runner-up, with Weaver falling back to run third. Kyle Bronson grabbed the fourth and final transfer spot, with Brandon Sheppard finishing fifth.

A field of 35 cars is entered in Monday night’s card, which is topped by a 25-lap feature paying $5,000 to win. … With Lucas Oil Series points only up for grabs in East Bay’s Friday and Saturday events, Clint Bowyer Racing teammates Don O’Neal of Martinsville, Ind., and Darrell Lanigan of Union, Ky., are not competing the Winternationals opener. … Scott Bloomquist of Mooresburg, Tenn., is also sitting out the evening’s competition; his hauler was not even in the pit area when the drivers’ meeting began at 5:30 p.m. … Jonathan Davenport of Blairsville, Ga., is keeping his K&L Rumley Longhorn machine parked for Monday’s program. But he won’t sit idle — he’s jumping behind the wheel of good buddy Mason Zeigler’s Longhorn car for the evening’s action. … Randy Weaver of Crossville, Tenn., has his familiar Chip Stone-owned Longhorn Race Car in the pit area, but he plans to spend the week driving a new Billy Moyer Victory Race Car owned by Leon Henderson of Laurel, Miss. Weaver, who last competed at East Bay in 2014, will let his equipment rest until Sunday’s Lucas Oil Series event at Bubba Raceway Park in Ocala, Fla., unless problems crop up with Henderson’s mount. … Kyle Bronson of Brandon, Fla., is entered with his usual Wayne Hammond-owned No. 40b after splitting his time between it and South Carolinian Troy Baird’s vehicle at Golden Isles Speedway in Brunswick, Ga. … Mike Marlar of Winfield, Tenn., said he has some adjusting to do in his return to East Bay after a two-year Winternationals absence. “The last time I was here they was on 1100s (tires),” said Marlar, who wasn’t happy with his performance at Golden Isles. “Now we’re on hard tires, so that changes things a little bit for us. At least we got some practice laps in last night.” … Chad Hollenbeck of Kingsley, Pa., who is competing at East Bay for the sixth consecutive year, didn’t do much damage to his Black Diamond Race Car when he rolled it lightly during Saturday night’s B-Main at Golden Isles. Aside from some bent left-front suspension pieces, the machine came through the ordeal fine. “There is some red paint on the bottom of the frame rails,” joked Hollenbeck, who slid into Dennis Franklin’s path and was hit by the Gaffney, S.C., driver (hence the red paint transfer). “Rambo and I are good friends now — I’ll carry him around with me.” … Among first-time East Bay Dirt Late Model Winternationals entrants are Greg Oakes of Franklinville, N.Y., who has raced an E-Mod at the track in the past; Alex Ferree of Saxonburg, Pa., who is back behind the wheel of the Bucky Johnson-owned Club 29 Race Car he ran in last year’s World 100 and Dirt Track World Championship events; brothers James and Josh Rice of Verona, Ky.; Jake Davis of Hackett, Ark.; and Colton Flinner of Allison Park, Pa.

The 2016 Lucas Oil tour kicked off over the weekend at Golden Isles Speedway near Brunswick, Ga. Josh Richards of Shinnston, W.Va., and Jonathan Davenport of Blairsville, Ga., picked up victories. Both drivers are on hand for Monday’s event at East Bay.