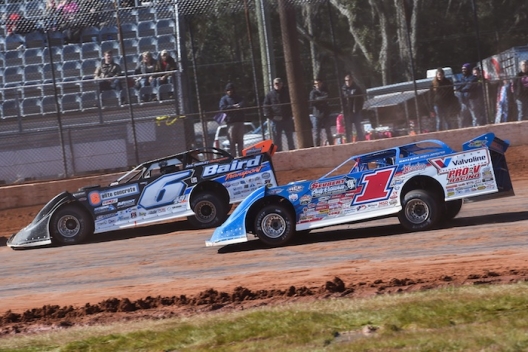 BRUNSWICK, Ga. (Feb. 7) — Using lapped traffic to his advantage, Josh Richards of Shinnston, W.Va., reigained the point from polesitter Jonathan Davenport of Blairsville, Ga., on lap 46 of 60, leading the remaining circuits to capture a victory in the Super Bowl of Racing finale at Golden Isles Speedway. He collected a Georgia-Florida Speedweeks-high $15,000 payday and his eighth career Lucas Oil Late Model Dirt Series victory.

With Davenport jumping to the lead on the first lap, Richards used an early restart to charge to the front of the of the field. The defending Lucas Oil Series champ slid back to the front on lap 35, but it wouldn’t last, with Richards taking the lead with four laps remaining.

“It was unfortunate for (Brian) Shirley,” Richards said. "He broke and it moved us up to the outside pole and we got a good run in (turns) one and two. And then I went and pushed and he got the lead. Then he went and pushed. I knew we had a pretty good pace early, but I was trying to be easy on my right-rear tire to try to not use it and have something for the end. You feel like you’re a sitting duck out there because this place is so wide that you can slide somebody or get a good run on somebody. So I’m almost glad that he passed me back, because I could kind of see what is car was doing.”

Challenging Richards for the win, Davenport spun in turn four on the final lap, crossing the finish line in third. Jared Landers of Batesville, Ark., grabbed the runner-up spot, with Scott Bloomquist of Mooresburg, Tenn., improving from the 11th starting position to finish fourth. Eddie Carrier Jr. of Salt Rock, W.Va., rounded out the top five.

“That was a given runner-up finish, but I had a third-place car there,” Landers said. “Our team, we deserve to take that second spot away. Anything can help this thing. Top-fives is what we came here for and we want wins. Our car was just a little bit off, we’re just a little tight. But we knew that going in to it. I kind of got there and just maintained a little bit to try not to scoot my tires off early. But at the end I started trying to run it a little harder. This is a big step for our Crop Production race car, starting the year out like this.”

“Me and (Richards), we drive a 110 percent all the time, so I knew it was going to be a tough battle all the way to the end,” Davenport said. "I think we’ve got a little problem there with the car, I just couldn’t turn in like I needed to to save the tires and when it got slicker, to be able to drive straight off the corner. I finally figured out how to drive it there towards the end and got a little better, but then I couldn’t be consistent through lapped traffic, so he got us back."

With Saturday evening’s steady rain forcing officials to push the Super Bowl of Racing finale to Sunday afternoon, Richards said he was pleased overall with the track conditions.

“The track guys did a great job,” Richards said. We had so much rain last night. The track, this surface, was just hard enough to absorb the moisture well. We had enough moisture out on top and down on the bottom that we could move around. It didn’t just get crumby real early. The guys here did a great job trying to hustle the show along. If we’d have waited until later afternoon, I don’t think it would have been the same outcome.”

Notes: Brian Shirley was slated to start from the outside of the front row, but was pushed to the hot pit before taking the green when his car wouldn’t fire because of ignition issues. … Mason Zeigler spun on the backstretch to draw the first caution on lap one. … A yellow flag waved on lap three for a turn-two tangle involving Brandon Sheppard, Darrell Lanigan, Jimmy Owens and Chase Junghans. … Lanigan drew a caution on lap 28 when he slowed on the frontstretch with a flat right-rear tire. … A yellow flag flew on lap 34 when Randy Weaver slowed in turn four.

With overnight rains letting up and giving way to sunshine, racing action is set to get under way at Golden Isles Speedway. … With most of the drivers slated to start the second consolation selecting to forgo Sunday’s program, it has been dropped from the schedule. … Mason Zeigler of Chalk Hill, Pa., Mark Whitener of Ocala, Fla., and Darrell Lanigan of Union, Ky., will receive the feature starting spots. … The series provisionals were determined during Saturday’s racing and will go to Don O’Neal of Martinsville, Ind., and Steve Francis of Ashland, Ky. … Sunday’s Late Model program will include hot laps and will then go straight into the 60-lap, $15,000-to-win feature.

Misty rain that turned into sprinkles and then steady rain postponed the finale of the Georgia Boot Super Bowl of Racing.

Gates open at 10 a.m. Sunday with the drivers' meeting at noon and hot laps beginning at 12:30 p.m. The Late Model program will conclude with the second consolation and the 60-lap main event paying $15,000-to-win. Other divisions will also conclude their programs with the details to be announced.

All armbands will be honored.

The Lucas Oil Series still plans to practice Sunday evening with that session pushed back one hour than the original scheduled to 7-10 p.m.

Outside polesitter Chris Madden led the opening laps, with a red flag falling on lap two when Chad Hollenbeck rolled his No. 4Ds machine following a collision with Dennis Franklin in turns one and two. Madden held on to win the second consolation, with polesitter Chase Junghans grabbing the runner-up spot. Brandon Sheppard finished third to transfer to the feature. The race was cut to nine laps by rain.

Polesitter Ivedent Lloyd Jr. led the opening laps, with Jared Landers edging ahead on lap four to win the second heat race. Fifth-starting Devin Moran shot past Lloyd to take the runner-up spot after challenging for the lead. Scott Bloomquist improved one spot to finish third, with Lloyd finishing fourth to transfer to the feature. Chris Madden rounded out the top five.

Polesitter Jonathan Davenport shot to the front of the field at the drop of the green flag, with second-starting Eddie Carrier Jr. charging around the outside. Pulling away from the field, Davenport picked up the heat race win, with Carrier holding on to his second-place starting spot. Tim McCreadie finished third, with Dennis Erb Jr. grabbing the fourth and final transfer spot. Chase Junghans finished fifth.

Brian Shirley halted Jonathan Davenport’s streak of two straight top times at Golden Isles, posting a 15.231-second lap to top Davenport by nine-thousandths of a second. … A quick start has been big for Shirley’s team with Bob Cullen and Arnie Ranta on board as primary supporters. “Last season, it was rough,” said crew member Chad Simondsen, referring too a season when Shirley was partly sidelined by the health concerns of his wife. The team’s new Longhorn Chassis as been solid in its debut weekend, struggling only in Friday’s main event when Simondsen says the team was hesitant to make aggressive shock changes suggested. “We’re just starting to get the hang of it,” said Simondsen, who watched Shirley post a runner-up finish in Saturday afternoon’s feature. “We came out of the gate really strong.” … Another new Longhorn driver, Ivedent Lloyd Jr. of Ocala, Fla., joked that being second quick in his qualifying group Saturday evening might be his “one highlight” of the weekend, but he’ll have an opportunity in his heat race to capitalize further. “The main thing is I’ve gotta learn how to drive this thing,” said Lloyd, who credited Longhorn’s Matt Langston and Wesley Page with helping him out. “It’s just a lot different than what I was used to driving.” Lloyd made his competitive debut in the car this weekend practicing Tuesday in Ocala and Wednesday at Golden Isles.

Saturday’s Super Bowl of Racing finale pays a Georgia-Florida Speedweeks-high $15,000-to-win. … With the potential for rain and need for track prep, the evening program has been adjusted, with heat races shortened to eight laps and consolations shortened to 10 laps. … Jonathan Davenport of Blairsville, Ga., captured a $7,000 victory in the morning program, a makeup race from Thursday’s rainout. … Kyle Bronson of Brandon, Fla., has switched to his self-owned No. 40B machine after failing to make the starting lineup for Thursday’s makeup event. … Choosing to sit out Saturday morning’s non-points race, Clink Bowyer Racing teammates Don O’Neal of Martinsville, Ind., and Darrell Lanigan of Union, Ky., are among evening entrants.