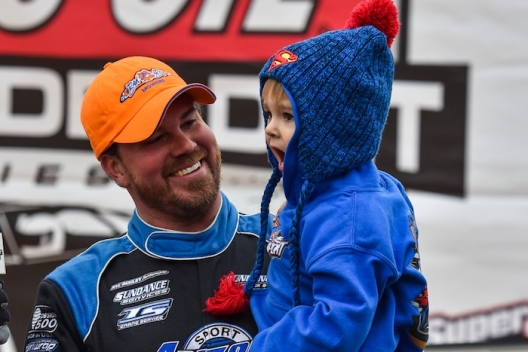 First, he was fortunate to salvage a third-place finish in Friday’s series opener at Golden Isles Speedway after a 360-degree that dropped him to 12th, and then his car was stuck in technical inspection until the wee hours at the Lucas Oil Late Model Dirt Series trailer.

But things smoothed out nicely for the 32-year-old Blairsville, Ga., driver on Saturday afternoon as he led all 30 laps in the first race of Saturday’s Georgia Boot Super Bowl of Racing doubleheader.

Taking advantage of a poor start by polesitter Josh Richards, Davenport zipped into the lead from outside the front row to collect $7,000 for his 17th career Lucas Oil Series victory.

“Man, this Longhorn (Chassis) has been great,” said Davenport, who also set fast time and won a heat race at the 4/10-mile oval. “When they teched us last night until early in the morning, we actually found some stuff wrong with the car, a couple of parts failures, so that really helped us today.”

Davenport’s only stress came when he was bottled up by slower cars in the last 10 laps with runner-up Brian Shirley of Chatham, Ill., and Richards, of Shinnston, W.Va., hot on his heels.

Davenport was able to get around the slower car of Josh Rice on lap 24, survive worrisome frontstretch contact with the lapped car of Allen Murray, and finally pull away for a commanding caution-free victory.

“I was getting a little nervous about those lapped cars there. Josh was catching me and I couldn’t ever get that one lapped car to move up off the bottom — I don’t know if he never looked at the (moveover) flag or whatever — so I found a little bit of a rubber strip on the outside back there and I just finally got a good enough run where I could clear him getting in (turn) three.”

With all the frontrunners sticking with the low groove on the daytime racing surface, Davenport was careful about choosing when too go outside of the traffic with Shirley and Richards right in his tire tracks.

“I knew Josh was catching me and a couple of lapped cars would hit that berm and throw that slime across the racetrack, then I would push,” Davenport said. “I just had to get out in clean air where I didn’t get messed up in somebody else’s mistake.”

Once Davenport cleared Murray, he cruised the final five laps to finish more than five seconds ahead of the tight battle for second as Shirley edges Richards by two-hundredths of a second at the checkers. Jared Landers of Batesville, Ark., was fourth for the second straight night and 11th-starting Steve Francis of Ashland, Ky., rounded out the top five.

Grabbing the lead at the outset was “definitely the key to the race,” said Davenport, glad that his chassis performed well. “It just seems like a Longhorn kind of day, you know, 1-2 for us like it was 1-2 for Rocket (Chassis) last night.”

Shirley never took a serious crack at the lead, but stayed in contention after fading in Friday night’s main event.

“You never know, I mean … the lapped traffic was kind of holding him up, too,” Shirley said. “I felt like we could keep pace with (Davenport). We’ve still got some work to do, but all in all, he’s the No. 1 driver in the country, so to keep up — after not being able to keep up last year — is a lot better.”

Richards, who won Friday night and was gunning for his first back-to-back Lucas Oil victories since 2011, was strong throughout the race except for the few seconds after the green flag dropped.

“My car just didn’t take off on the start like I needed to, and then Shirley got up underneath of me — he did what he had to do — and Jonathan got a roll,” Richards said.

“I felt like the adjustments we made were just a little bit too free. We still had a really great race car and I felt like we at least had a second-place car to Jonathan. The lapped traffic was kind of holding us all up there, but we had a great car and I’m proud of that, and we made some adjustments and know we know what adjustments to do and we’ll try again tonight.”

Picking up where he left off Friday night, Josh Richards of Shinnston, W.Va., grabbed the win in the first heat race, and will start on the pole of Thursday’s 30-lap makeup feature. … Finishing fifth in Friday’s feature, Chris Madden of Gray Court, S.C., will start seventh in Saturday morning’s main event. “We just had a little issue there qualifying,” Madden said. “Had a pressure gauge go bad on us, we had a lot more air than was supposed to be in the car. But we go it fixed. There in the heat race, we were pretty good, so maybe we can get us a good start here in the feature and drive up to the front." … Austin Kirkpatrick of Ocala, Fla., was slated to roll off from the third starting position in the third heat race, but suffered a flat during parade laps and left the track before taking the green flag. … Kirkpatrick’s misfortune working to his advantage, Eddie Carrier Jr. of Salt Rock, W.Va., raced to a second-place finish in the third heat. He’ll start sixth in Thursday’s makeup feature. “I think we’re probably going to have a problem with it getting one-lane, where we’re running in the day” Carrier said. “It kind of felt like it was latching up right then off of two. I’d say it’s probably going to be get your position at the start of the race and ride around for 30 laps. I just hope I get a good start.” … Mason Zeigler of Chalk Hill, Pa., started on the pole of the third heat race, but fell back in the opening laps. “I had the brake switched turned off on accident,” Zeigler said. “When I touched the brakes, it just pulled to the wall. Driver error, what can you do?” Zeigler’s slated to start fifth in the second consolation. “It’s day racing and I’m not real big on day races anyway,” he said. “We might just start focusing for tonight and get ready for that."

Brandon Sheppard became the third heat winner to repeat a preliminary victory from Friday night, staying ahead of a feisty fray for the second spot early in the eight-lapper. Tim McCreadie wedged past Randy Weaver and fought off Dennis Erb Jr. to grab the second spot for good and stay nearly within striking distance of Sheppard. Erb, who started fifth, ended up third while front-row starter Billy Moyer Jr. was a distant fourth in the final transfer spot. Randy Weaver was further back in fifth in a race that went caution free. Tail-running Cecil Eunice pulled up lame on the final lap after losing a driveshaft.

Fast qualifier Jonathan Davenport cruised to an easy eight-lap victory with third-starting Eddie Carrier Jr. posting a runner-up finish over Devin Moran. The fourth spot (barely) went to Ryan King, competing this weekend in the Warrior Race Cars house car. Jimmy Owens and Scott Bloomquist were left to battle for fifth behind King, who held on by four-thousandths of a second when Bloomquist made a last-ditch move off turn four. Outside front-row starter Mason Zeigler got too high entering turn one on the first lap and never contended. During parade laps, third-starting Austin Kirkpatrick had a flat tire and pulled pitside.

Polesitter Brian Shirley won a heat race for the second straight night, smoothly drawing away in his pole position for an easy victory. Outside front-row starter Kyle Bronson faded in the early laps with Chris Madden quickly stealing a second spot he'd hold the rest of the way. Steve Francis advanced two spots to finish third while Chase Junghans got the fourth and final transfer spot. Earl Pearson Jr. was a distane fifth and Bronson finished seventh in Troy Baird's ride.

Friday's winner Josh Richards got the jump on fellow front-row starter Jared Landers at the outset and cruised to an eight-lap victory that earned him the pole for the 30-lap feature. Landers chased him the distance i second while fourth-starting Donald McIntosh ran a solid third in a three-car breakaway. Mike Marlar won a tight battle for the final transfer spot with Josh Rice and Allen Murray. Third-starting Kenny Pettyjohn was running third on the second lap when he caught the infield berm and spun in turn two, drawing the prelim's lone caution. Austin Theiss retired on lap four.

Friday’s runner-up finisher Brandon Sheppard of New Berlin, Ill., will start on the pole of the fourth heat race. Strong runs have been a boost for his new Best Performance Motorsports team. “We’ve been pretty consistent here,” Sheppard said. “We found a little sweet spot with this new car and we’re just kind of fine-tuning around that. It seems to be working so far, so we’re pretty excited about the few weeks here at Speedweeks.” … After posting a top-10 finish on Friday night, Brian Shirley of Chatham, Ill., also finds himself among heat race polesitters. “We’ll just take it one step at a time,” Shirley said. “We were pretty good last night and just didn’t make the right adjustments through the night.” While he was among Saturday morning’s fast qualifiers, Shirley knows he has to be on top of his game come heat race time. “It’ll be different, because it will be slick, so we’re definitely going to have to make some changes. So that will be a new process for us. We’ll see how it goes.” … Not looking to start his 2016 campaign until March’s Pelican 100 at ArkLaTex Speedway in Vivian, La., reigning Comp Cams Super Dirt Series champ Jack Sullivan of Greenbrier, Ark., made the trip to Georgia-Florida Speedweeks to lend a hand for the Rocket House car team of Josh Richards. “Richards said he might need some help going to Florida, and I said, ‘Well, I’d love to go.’ It’s a chance for me to come down here and help and learn.” Sullivan plans to follow the team up to Volusia, but then he’s headed back to Arkansas. “Two weeks is about all I can handle,” he joked.

Reigning series champ Jonathan Davenport of Blairville, Ga., topped time trials for the second straight Lucas Oil Series event, posting a 15.377-second lap, quicker than everyone else by more than two-tenths of a second. Davenport will start on the pole of the third heat; other heat race polesitters are Josh Richards of Shinnston, W.Va., Brian Shirley of Chatham, Ill., and Brandon Sheppard of New Berlin, Ill.

The Edwin Coggins Memorial pays tribute to a long-time Golden Isles fan and supporter who died at the 2014 Super Bowl of Racing. … Jonathan Davenport of Blairsville, Ga., had a lengthy, late-night trip to technical inspection after his third-place finish, but all checked out OK, series officials said. Davenport’s draws heightened attention because suspension-rule changes the series instituted this season were largely in reaction to his Rumley Enterprises’s team’s Longhorn Chassis. … With rain possible in the evening, Saturday's shuffled has been scheduled with modified and Crate Late Model time trials for the evening program moved to immediately following Saturday afternoon's program. ... Clint Bowyer Racing teammates Don O’Neal of Martinsville, Ind., and Darrell Lanigan of Union, Ky., chose to sit out the afternoon event. … Drivers scratching for the weekend: Brian Connor of Martinez, Ga., and Robert Baker of Bryant, Ark., who damaged his car in Friday’s time trials.