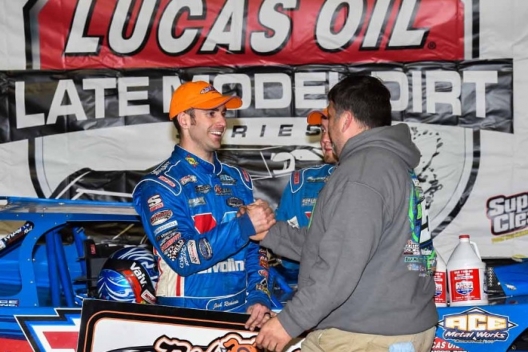 Charging to the front of the field at the drop of the green flag, Richards lost the lead to Sheppard on lap 46, but regained the point just one lap later, picking up a $10,000 payday in his seventh career Lucas Oil Series triumph.

“It’s been six years since I’ve been here,” Richards said. “The track’s changed a lot. I was still trying to figure it out in the heat race. I knew we’d have to start on a softer tire than what I think we would normally run. By the end of the race I was trying to carry speed, but the more speed you would carry, the hotter the tire would get. It was laying over on the right-rear at the end.

“Sheppard did a great job. I say him under me a couple of times and we just tried to hold it off. One or two more corners, I think that’s all she had. It was just enough to pull it off.”

Sheppard held on to finish runner-up, with defending Lucas Oil champ Jonathan Davenport of Blairsville, Ga., rallying to finish third after an early tangle with Chris Madden of Gray Court, S.C., sent him spinning infront of the field. Jared Landers of Batesville, Ark., ran fourth, with Madden rounding out the top-five.

“The track was starting to cleanup there a little bit in the bottom,” Sheppard said. “I found that a little before (Richards) did after that last restart. He saw me going down the frontstretch and we both just drove in there. We kind of drove in there side-by-side and he got a little bit deeper than I did and took the air off my nose and I pushed. But it is what it is. To come out here and run top-three the first night is awesome. It’s good for your confidence. It’s a long few weeks we’ve got here and to come out and run second the first night is huge.”

Charging back through the field after an early collision with Madden had him sideways, Davenport salvaged a top-three finish.

“We was kind of just trying to find a spot to ride there because we knew we was going to be wearing tires and was going to be pretty slick on tires at the end,” Davenport said. “I was trying to find a spot to ride and get in position. I got a run on (Madden) there and he didn’t know I was on the inside of him. I hit that berm through three and four there with the front nose and it just spun us around. I just grabbed a handful of wheel and a footful of throttle there and tried to get it turned around. I’m just glad everybody was watching ahead of them and didn’t hit us there. We got lucky the caution didn’t come out. Then we got rolling on the top."

Notes: Dennis Erb Jr. drew the first caution when he spun in turn two; he spun in turns three and four to draw a second yellow flag on lap six. … Running among the top-10, Chris Madden and Jonathan Davenport collided in turn four on the eighth lap. Spinning but never stopping on the track, Davenport continued on without drawing a caution. … A yellow flag waved on lap 14 when Kenny Pettyjohn spun in turns three and four. … Another yellow flew on lap 21 for debris on the racing surface. … Randy Weaver slowed on the backstretch to draw the final caution on lap 43.

Charging around the high side, second-starting Mason Zeigler took the lead as the green flag waved. A yellow flag flew on lap five for a turn-two tangle involving James Rice and Tyler Millwood. Pulling away, Zeigler picked up the win in the second consolation, with Don O’Neal running second. Fighting back challenges from Chase Junghans, Mark Whitener grabbed the third and final transfer spot. Junghans finished fourth, with Kyle Bronson rounding out the top five.

Drivers overtaking reigning Lucas Oil Late Model Dirt Series champion Jonathan Davenport have been as rare as dodo bird sightings the last six months, but Josh Richards pulled off a nifty pass of Davenport in the first heat to earn the pole for the 50-lap feature. Davenport led comfortably early, but Richards drew closer before a mid-race caution and, on the restart, went inside Davenport between turns three and four and drew away. “I knew if he left that lane open I as going to try and get up through there,” Richards said of the restart. “I didn’t think it was going to stick as well as it did.” The Rocket Chassis house car driver knows his tires and equipment won’t hold up 50 laps, so he’ll have to pace himself somewhat in his first feature at Golden Isles in six years. “I’m still trying to figure the place out,” he said. …  When fourth-heat winner Brian Shirley of Chatham, Ill., backed into his pit stall, new car owner Bob Cullen was there to give him the report that he “walked” the field after pulling away from Eddie Carrier Jr. “The first one out of the box, that’s good to see,” an excited Cullen told DirtonDirt.com. “That’s fun to watch when that happens. Enjoy the good times because there’s always some bad.” … Austin Kirkpatrick of Ocala, Fla., ran a strong second early in the second heat, but he faded badly by mid-race and slipped all the way back to sixth, missing a transfer by two spots. The late arriving Kirkpatrick missed hot laps and, after qualifying, discovered he wasn’t using the suspension setup he intended and made changes that didn’t pan out. It wasn’t too bad, Kirkpatrick said, but against stout Lucas Oil Series competition, “you can’t be even a little bit off.” He’s scheduled to start fourth in a consolation race. … Earl Pearson Jr.’s team was hard at work on making repairs to the Dunn-Benson entry’s nosepiece after he caught the inside berm and spun in turn two while running sixth in the final heat. He’ll start on the tail of the second consolation.

Polesitter Brian Shirley charged to the front of the field at the drop of the green, with Earl Pearson Jr. spinning in turn two to draw a caution on the fourth lap. Shirley led all 10 laps to win the fourth heat, with Eddie Carrier Jr. holding on to his second-place starting spot. Jimmy Owens improved one spot to finish third, with Billy Moyer Jr. running fourth. Mason Zeigler finished fifth.

Outside polesitter Chris Madden jumped to the lead as the green flag waved, with Allen Murray spinning to draw a caution in turn one, resulting in a complete restart. As Madden, Jared Landers and Kyle Bronson went three-wide to start the race, Madden edged Landers to lead the first lap. After a side-by-side battle with Madden, Landers charged ahead to lead lap three. Landers held on to win the third heat, with Madden finishing runner-up. Dennis Erb Jr. improved two spots to run third, with Donald McIntosh grabbing the fourth and final transfer spot. Don O’Neal rounded out the top-five.

Polesitter Jonathan Davenport charged to the lead at the drop of the green flag, with shuffling amongst the middle of the field in the early running. Chad Hollenbeck slowed on the frontstretch to draw a caution on lap six, just as second-running Josh Richards began reeling in the race leader. Richards slid past Davenport in turn four to take the lead on the restart, with a second yellow flag flying  on lap eight for Steven Roberts. Richards picked up the heat race win, with Davenport edging Ivendent Lloyd Jr. for the runner-up spot. Lloyd ran third, with Tim McCreading finishing fourth. Kenny Pettyjohn rounded out the top five.

Jonathan Davenport of Blairsville, Ga., topped 45 entrants with a 15.326 qualifying lap. ... Scott Bloomquist’s late arrival was eagerly anticipated by his teammate Jared Landers, who quickly bolted on shocks that Bloomquist brought from Tennessee. The shocks helped the Batesville, Ark., driver top the second group in time trials with a 15.399-second lap. “We was way better tonight than practice night,” said Landers, second quickest overall behind Davenport. “I don’t think I was as smooth in the corners as Jonathan.” His aim? A top-three finish to start the season. … Brandon Sheppard of New Berlin, Ill., was just behind Davenport in the first qualifying group in his first effort for Ohio-based Best Performance Motorsports, the team he joined during the off-season. “They said he was kind of driving like a girl the first lap,” crew chief Randall Edwards said, but Sheppard stepped it up on the second circuit with a 15.415-second lap. The team is debuting a new Rocket Chassis, the XR1 model. … Ivedent Lloyd Jr. of Ocala, Fla., was held to a single qualifying lap (16.007) when an ignition wire came loose. … Robert Baker of Bryant, Ark., may have a short Speedweeks stint after slapping the turn-one wall in time trials. “It’s heartbreaking,” said Baker, who got into the slippery part of the track and couldn’t keep his Bloomquist Race Car off the concrete. It may have bent the rear clip, and crew members were debating whether repairs could be made. His backup car wasn’t ready and was back in Arkansas. “It’s tough,” Baker said. “That’s not what I wanted to do, not the first night out. It’s a long way from home.” … Dennis “Rambo” Franklin showed smoke in hot laps, but it proved to be a harmless oil line issue. But his qualifying time was subpar at 16.131 seconds, just 16th quickest among 20 cars in the second group

Friday’s event is the first Lucas Oil Late Model Dirt Series points race of the season with time trials, heat races (four transfer), consolation races (three transfer) and the 50-lap main event. … Thursday’s non-points event will be made up as the first half of a Saturday doubleheader. … Friday's 45 entries are the most Super Late Models for the Super Bowl since 45 cars entered for the 2011 finale, which ended up raining out. … Two-time series champion Scott Bloomquist had a long Friday haul from Mooresburg, Tenn., and hadn’t arrived when hot laps began. … Ryan King of Seymour, Tenn., is piloting the Knoxville, Tenn.-based Warrior Race Cars house car.